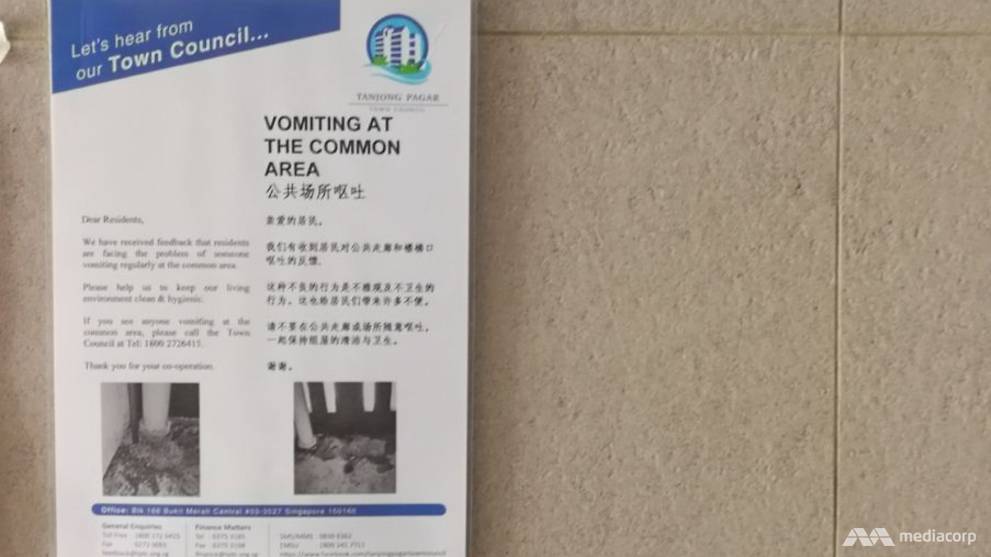 This led to posters being put up at the award-winning housing estate, asking residents to "keep our living environment clean and hygienic". Photos on the poster show patches of vomit on the ground near pipes.

"We have received feedback that residents are facing the problem of someone vomiting regularly at the common area," the poster, put up by Tanjong Pagar Town Council, said.

The Town Council's vice-chairman Joan Pereira told Channel NewsAsia it received a complaint last year that there was a problem of vomiting at the common area at Block 1C. It was happening up to four times a week.

"Town Council put up the poster as an educational tool to deter this anti-social behaviour as well as to seek residents’ assistance to contact the Town Council if they know who had committed this act," she said, adding that the vomiting has since stopped.

When Channel NewsAsia went to the estate on Tuesday (Jan 16), the posters were still up at the main lobby of Block 1C, and also at lift landings on other floors. However, around 20 residents that Channel NewsAsia approached were unaware of the vomiting problem.

A cleaner who did not want to be named was aware of the problem but said the situation has improved significantly.

"Now it's better. That time, three weekends in a row I saw vomit at the car park, near the letter box. When I see it, I will take a photo and inform the officer-in-charge," he said.