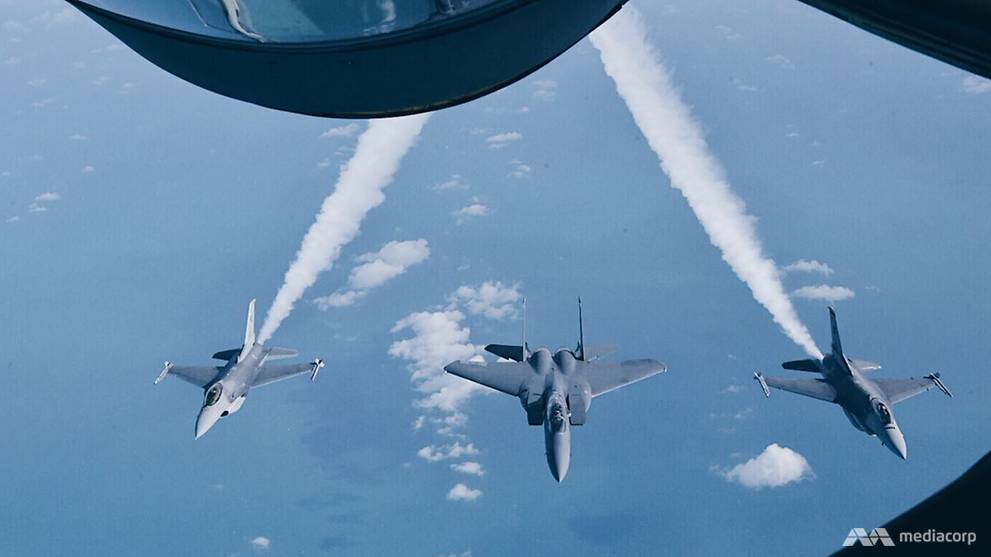 The F-15SG (middle) and F-16s in formation for a media preview. (Photo: Hanidah Amin)

SINGAPORE: Three of the Republic of Singapore Air Force’s (RSAF) sleekest fighter jets will be pulling off acrobatic manoeuvres in a never-before-seen aerial display to kick off its 50th anniversary celebrations.

At next month’s Singapore Airshow, two F-16s and an F-15SG will perform together for the first time.

The fighters will participate in aerial displays as part of the RSAF50 celebrations. (Photo: Hanidah Amin) ​​​​​​​

RSAF50 steering committee chairman Brigadier-General (BG) Kelvin Khong told reporters on Wednesday (Jan 17) that the display is “not easy” to pull off.

“The F-16 is actually a small and very nimble aircraft. The F-15 is bigger and is very powerful,” he explained.

“As far as we know, we are one of the first air forces in the world to have done this. So, our pilots had to apply their years of operational experience to practise it so that it will be exciting for the audience.”

BG Khong declined to reveal the type of acrobatics that will be on display, only saying that it will be a “little bit different” from previous displays.

“We put quite a bit of thought into how we want to choreograph the aerial displays, what sort of assets we wanted to put up,” he added. “We wanted to have things that were fresh and would be of interest to Singaporeans.”

President Halimah Yacob will launch the RSAF50 celebrations on Feb 7 at the airshow, which will feature double the number of RSAF assets on display compared with previous airshows.

Madam Halimah will also unveil a special livery RSAF50 F-15SG and contribute the first picture to a 50,000-photograph commemorative mural that the RSAF hopes to put together over the course of the year.

New highlights at the RSAF50 airshow display include a mock-up runway with airfield landing aids, an aircraft arming display and realistic aircraft and weapon system simulators.

Also at the airshow on Feb 10 and 11, Singaporeans and Permanent Residents will get to experience flying on the Super Puma helicopter. Those interested have until the end of January to ballot for slots on the Mindef website.

The birthday bonanza continues in the heartlands from March to May, as RSAF brings its assets to Sembawang, Bedok and Punggol for the first time. Toa Payoh and Jurong East also make a comeback after they featured at the RSAF45 celebrations in 2014.

Defence Minister Ng Eng Hen will launch the first exhibition at Toa Payoh on Mar 10. The exhibitions will involve demonstrations unique to each heartland location. For example, visitors at Sembawang will witness live helicopter operations for the first time.

The celebrations culminate over the National Day weekend at Marina Barrage, where Singaporeans can enjoy a commemorative flypast comprising more than 20 flying assets, including unmanned aerial vehicles for the first time.

The F-15SG, F-16s and Apache AH-64D attack helicopters will also perform aerial displays over the barrage.

In addition, the RSAF will hold a parade on Sep 1 – in conjunction with its anniversary – at Tengah Air Base. Prime Minister Lee Hsien Long will grace the parade, which will feature a mobile column and a salute-to-the-nation flypast. The Multi-Role Tanker Transport will also be making its public debut.

BG Khong – who is also chief of staff, air staff – revealed that based on the RSAF’s “cycle for when we renew our platforms”, it will be bringing in new assets this year.

“We look forward to celebrating this milestone with everyone through the various events we have planned,” he added.

“The transformation over the past 50 years into a capable air force today is only possible with the support of Singaporeans and dedication of past and present airmen and women.”

What are the plane trying to proof??