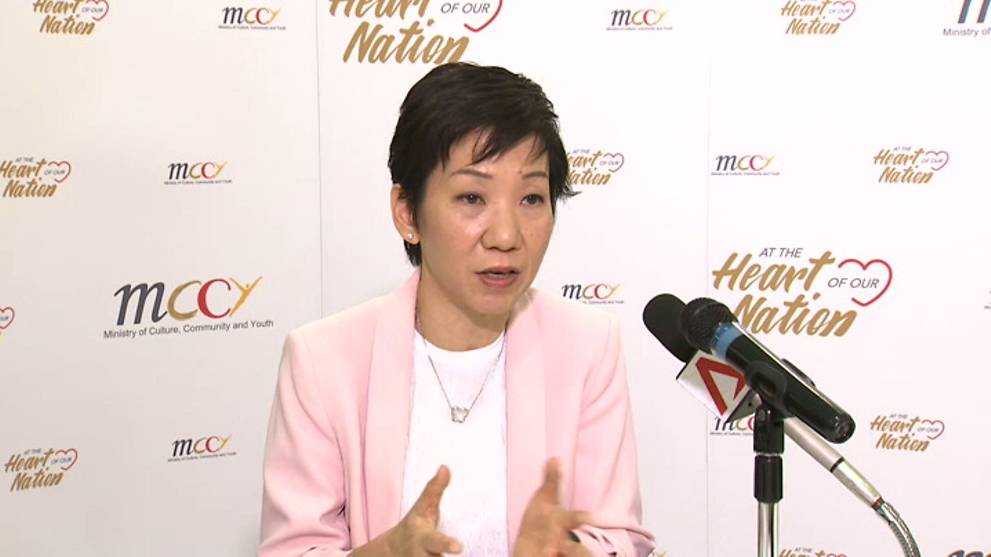 In a wide-ranging interview, the Minister for Culture, Community and Youth pointed out that if considered holistically, the survey results also showed good diversity in Singaporeans’ social networks.

Minister for Culture, Community and Youth speaking to journalists on her ministry's year in review.

SINGAPORE: The results of a recent survey by the Institute of Policy Studies (IPS) that showed a social class divide among Singaporeans is concerning, but not alarming, said Minister for Culture, Community and Youth Grace Fu. Instead, she pointed out the need to look at the study’s results holistically.

Speaking in a wide-ranging interview on Wednesday (Jan 17), Ms Fu noted that the survey results do in fact also show a good diversity in Singaporeans’ social networks.

The nationwide survey, which was commissioned by MCCY, had asked 3,000 Singapore citizens and permanent residents about the nature of their social ties.

In terms of socio-economic diversity, the survey found that respondents can easily name people they know from different gender and age groups, and are also fairly able to list people from different racial, religious and nationality groups within their network.

But the survey also found private housing dwellers tend to mix with people living in the same housing type, instead of those in public flats.

People from so-called “elite” schools also tend to socialise with those who went to similar schools.

When asked if the results concerned MCCY, Ms Fu noted that if they are looked at their entirety, the level of diversity in “many other aspects” is in fact very good.

“If you look at the type of education attainment and broaden it further to secondary school, polytechnic and university, there’s diversity as well,” she explained. “Where we have relatively lower diversity is usually whether you’re a graduate or otherwise.”

The same goes, she added, with housing. “If you look at housing in general, there’s actually great diversity.”

“So if you live in public housing, it doesn’t really matter what type of public housing. Your friends would be across many different types of housing, or even across different locations and precincts as well.”

She also stressed that surveys like this are for MCCY to “get a sensing of the outcomes”. This particular IPS study, she added, “tells us something about the diversity of social networks of Singaporeans,” and is something that the ministry would track over time.

“Because like many things, you can’t make sense of how diverse...is this diversity sufficient or not,” she said. “It’s really about tracking the time, and trends and development over time that we’re able to have better sensing.”

“So are we concerned? Yes, Iike all surveys, we watch these trends carefully. But are we alarmed? I would say no,” she said.

OPPORTUNITIES FOR SOCIAL MIXING THROUGH SPORTS, ARTS AND VOLUNTEERING

Ms Fu said MCCY will facilitate opportunities for people of different backgrounds to mix. “That, we see, is very effective through sports, arts or volunteerism,” she said.

Highlighting the Outward Bound School (OBS) programme as one example, Ms Fu explained that the programme is “very deliberate” in mixing groups of students from different schools.

Ms Fu said she saw one such group made up of students from a Special Assistance Plan (SAP) school, and another school.

“When you have the opportunity for them to spend five days together, challenging them in tasks when there’s a height element, or has some level of difficulties requiring them to work together, you find that they discover leadership in one another and in themselves, and to work with people who were strangers before,” she said.

Another way people can make friends with those they would not normally meet, she said, is through social interest groups like running groups. Citing the example of a running group in her constituency that she participates in, Ms Fu noted that MCCY would also like to be encouraging, facilitating and providing such opportunities.

“But ultimately, we would also like to encourage groups and people to organise themselves and participate actively, because it takes two hands to clap,” she said.

Another area in which this can be done, she said, is through common experiences.

“Regardless of which school you go to, we’re hoping that as you go through your education, you have exposure to our galleries, museums, performing halls and groups,” she said. “And if that opportunity is not available at home, the schools, MCCY and the institutions will be there to provide these opportunities.”

Giving an update on MCCY’s efforts in the past year, she noted that the pilot run of the Performing Arts-Based Learning experience, where students of different backgrounds are brought into arts venues like the Esplanade and Victoria Concert Hall to access performances specially curated for them, has reached more than 5,000 students from 22 secondary schools.

“In a typical gallery, you see that those who usually go there are those who are particularly fond of the arts, like the collectors and so on,” she said. “But to have 10,000 children and their parents running around at a national-level gallery, it signifies the attention that we place to make our facilities accessible.”

“This is something that our art institutions will continue to do,” she said.

NEED TO BUILD RELATIONSHIPS IN PHASES BEFORE TALKING ABOUT POTENTIAL FISSURES

When asked if external threats like religious extremism was also a cause for concern, Ms Fu pointed out that it is important given the recent trends of self-radicalisation, but “not the only cause we need to be concerned with”.

“It has heightened the risk level in Singapore, and is something that we are working very closely with MHA with to address these concerns,” she said. “But we are not taking our eyes off the other divides that could potentially fracture society.”

Potential fissures like race and religion, she added, have always been taken quite seriously. “There are also fissures such as foreign/local that is also important for us to address, and divides such as income inequality is also an important area,” she said.

But she pointed out that getting people to address deeper questions such as these will require the building of relationships in phases.

“You need to first know and understand each other before you can engage in deeper conversations,” she said. “So we have to do that in cross-segments of society.”

At the most basic level, she explained that MCCY is encouraging mixing through sports, where regardless of one’s background and religion, people can come together to play football for example.

“That’s a good way for us to know each other,” she said. “At the deeper level, how do you have opinion leaders that can have deep discussions and ask difficult questions about theology and the position that each religious organisation takes on issues.”

“We’re doing this with the leaders of the IRCC circles, where they have already had years of coming together and meeting each other every year,” she said.

“Then we can take this discussion, that level of engagement to a deeper level.”