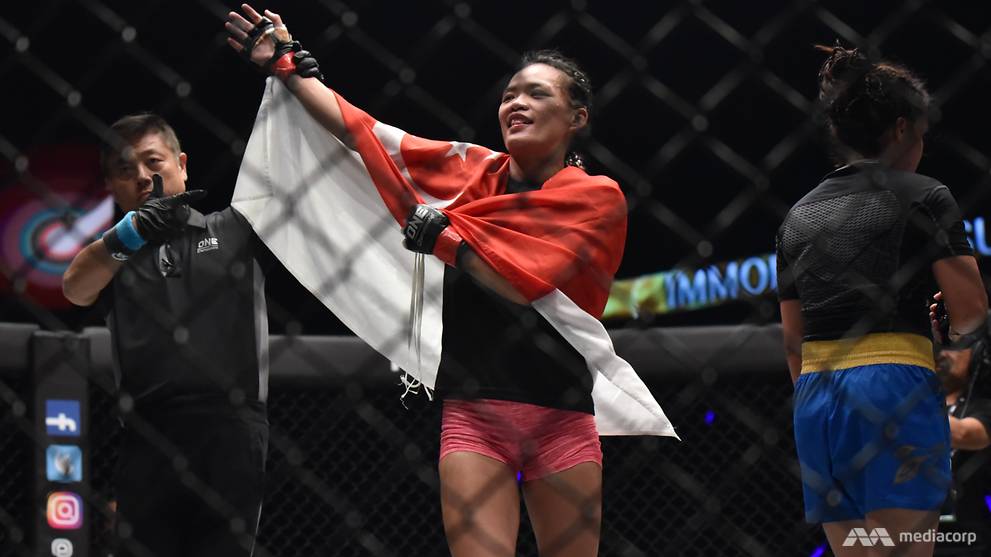 The 28-year-old is aiming to do Singapore proud at her ONE Championship title bout in Jakarta on Saturday.

SINGAPORE: On paper, Singapore’s Tiffany "No Chill" Teo might be the underdog going into her ONE Championship Strawweight Championship title fight in Jakarta this Saturday (Jan 20).

The 28-year-old, however, is aiming to be the first Singaporean mixed martial arts (MMA) champion with the promotion. While fellow ONE fighter Angela Lee fights under the Singapore flag through her Singaporean father, the Canadian-born Atomweight champion holds an American citizenship.

As a professional, Teo has gone through seven fights in her career thus far and has won all of them convincingly. Her Chinese opponent Xiong Jing Nan, however, has been at it slightly longer with a record of 10 fights and one loss.

Xiong, 30, also started combat sports at an early age, taking baby steps in amateur boxing at the age of five. Teo, on the other hand, only seriously embarked on combat sports when she picked up Muay Thai eight years ago.

It is a fact not lost on Teo’s coach Luke Adams, but the American is quietly confident that she has what it takes to wrap up a decisive victory.

“I think they’re putting the odds in the other girl’s favour but I don’t see it that way at all,” he said. “Just you watch … I’m not surprised if it goes to the ground, and Tiffany will start trapping her.

"It’ll be a short story for sure.”

Having coached Teo during her month-long stint in Phuket, Adams believes that the Singaporean has what it takes to become ONE’s inaugural women’s strawweight champion. “I think she’s very well prepared and she has a lot of experience in other disciplines like jiu-jitsu and boxing,” he said.

“She brings it all the time – she doesn’t miss weights, never backs down from whatever fight match-up she’s been given and most importantly she wins all her fights without really getting hurt,” added Adams. “She always does very well at such a big stage given such a short timespan.”

Cutting a somewhat uneasy figure at the rostrum for ONE Championship’s packed pre-event media conference on Thursday, one may be forgiven for thinking that Teo is feeling the jitters ahead of her headline event this weekend.

“I’m not really used to speaking to such a big crowd though, as I’m more of an introvert,” said the reserved Teo, who was more at ease immediately after the media session. “But nonetheless, I’m ready and confident to win the title belt and bring it home to Singapore.”

On Friday, the Singaporean continued to show no signs of worry during a one-on-one interview with Channel NewsAsia, on the sidelines of her final closed-door weigh-in which she aced with ease.

“There is understandably more attention on me ahead of this big fight which I’m not very used to, but I can say that I’m really focused and prepared to face (Xiong),” said Teo. “I shut out (distractions) by doing a bit of meditation ... while also visualising the outcome that I want out of the title fight.

“The most important thing to focus on right now would be my abilities in the ring come fight night,” she added.

Among the mental battles Teo will be fighting prior to her bout are the implications of losing the title bout itself, according to her former trainer Major Overall of Team Highlight Reel in Singapore.

“When you walk into fight week, what’s about to happen during that week itself determines what kind of path your career takes in the near future,” he explained.

“There’s a bit of pressure going into the fight, in that sense. For both these girls, signing up for a title fight implies a contract extension," said Overall. "If you’re going to have your contract extended and if you didn’t win, then it will feel awful.”

He added: “The (women's) division at ONE right now isn’t really big enough for you to be able to bounce back and get another shot at a title fight. Usually is all or nothing, and that’s a huge pressure in itself.

“If you lose a regular fight you can bounce back, but if you lose a title fight in a small division it can be really hard to mount a comeback.”

Among those who will be watching Teo fight on Saturday is her elder brother Nelson, who is in Jakarta together with their father.

“It was an easy decision on deciding to make it for her upcoming fight,” said Mr Teo, who took a day off work on Friday. “Her title match is a big deal and she has worked so hard to get where she is. The least we could do is to support her."

Teo's close friend Mae Tai is also in Jakarta to lend her support. “I guess there are always possibilities and risks within the ring," she said.

"But with Tiffany’s experience and confidence, I think she will be able to handle whatever that’s thrown at her very well,” added Ms Tai, who used to train with Teo. "She is someone who follows her heart and I always knew she would make it because she believes so much in her dreams.

“As her friend, I will definitely be worried for her safety but I have faith in her that she will win.”