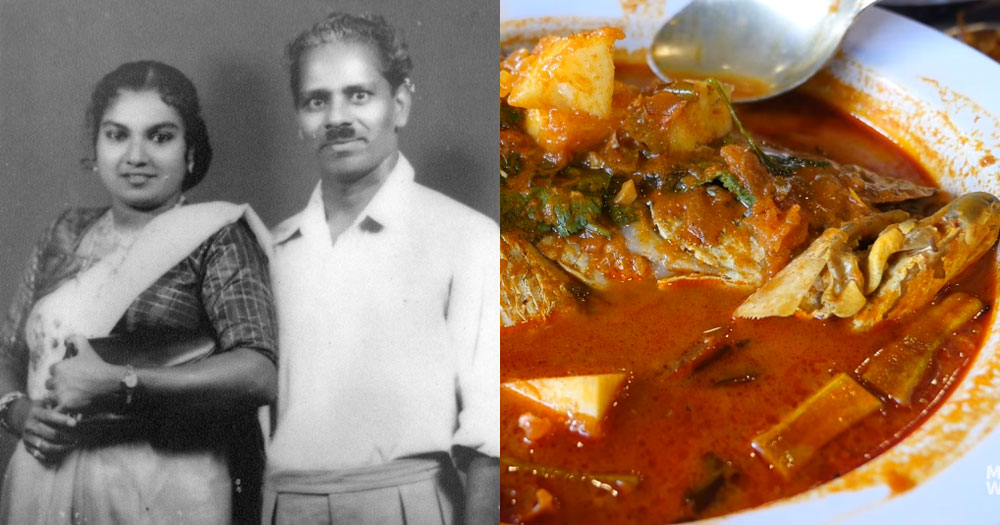 Imagine sparking a food revolution in a country you happen to spend some time in — and then feeling a little disgruntled before dying because you never got to find out the scope of your contribution to culinary history.

Well, that’s the story of Marian Jacob Gomez, who is more popularly referred to as M.J. Gomez, Singapore’s inventor of the fish head curry.

What led to the search for M.J Gomez?

The search for the founder of Singapore’s fish head curry was recounted in in December 2017.

The name M.J. Gomez, widely cited as the man who introduced the fish head curry dish here, was an enigma due to a lack of records.

If not for tabla! publishing its piece, it was not even certain what the initials “M.J.” stood for.

Why is he a bit of a legend?

The Indian community here, up till this day, is said to be familiar with his name but no one knows exactly who he was.

From there, M.J. Gomez’s grandson and son were traced and interviewed.

The name M.J. Gomez is short for Marian Jacob Gomez.

Gomez, the eldest of seven children, started working at the age of 17, after his father died.

Over the course of his life, he would travel back and forth between India and Singapore.

He came to Singapore from Trivandrum, the capital of Kerala, in the 1930s.

He returned to India to get married.

After the birth of his first child, a daughter, he returned to Singapore, which was going through World War II.

When the war ended, Gomez went back to India again and spent a few years there. That was when his son — who is the one who recently provided crucial information about his father’s contribution to culinary history — was born.

Gomez then came to Singapore again, and later brought his family over.

What happened in the 15-odd years Gomez spent in Singapore?

The Gomez family lived in Sophia Road, where the head of the house started his restaurant, Gomez Curry, which later moved to nearby Selegie Road.

The official year fish head curry was first sold has been as 1949.

Gomez is credited for popularising the fish head curry dish among the Chinese, by making it sweeter and less spicy.

Raw fish head is believed to have been discarded or valued lowly by fishmongers in the past.

In 1964, Gomez returned to India and settled in Kollam.

What happened to his business?

However, according to Gomez’s son, the founder of fish head curry in Singapore was a bit disappointed that the three people he had entrusted his restaurant to did not get in touch with him later.

According to the son, before leaving, his father handed over his restaurant to a man known as KT, who is Gomez’s trusted trishaw man; Rocky, the waiter in the restaurant; and Sebastian, the cook.

They ran it under the Gomez Curry name for some years, but eventually it closed down.

Gomez himself did not start any other restaurant back in India and simply led a quiet retired life in Kollam.

He died of a heart attack at the age of 67. Nine years later, his wife Mariyamma died. And not long after that, his daughter also died.

Gomez never knew that his dish would outlive his family to become ubiquitous in Singapore and a part of our culinary heritage.

In a March 1979 article by the , fish head curry was written about at some length.

This was more than 15 years after Gomez returned to India and five years after his death.

A NYT reporter came to Singapore to try out a variety of fish head curry dishes to make recommendations to the publication’s American audience.

Some notable parts of the piece include:

• The mention of Gomez’s eatery at Mount Sophia Road.

• Gomez being referred to as the “George Washington of fish head curry”.

• NYT said Gomez came to Singapore in 1928 from Trivandrum, on the Malabar coast of India, while tabla! said it is in the 1930s.

• The type of fish used was “huge heads of red bream”, with delicate meat behind the jaws and under the gills.

• The address of Gomez Curry was at 9 Selegie Road.

• NYT cited a proprietor of Gomez’s business as Maria Das, who claimed to be the remaining disciple, together with the cook, Sebastian DeCruz, who is also mentioned in the tabla! piece as “Sebastian”.

• There were nine tables in the eatery.

• The proportion of ingredients used in the recipe was described as “strictly confidential”.

• The dish was described as “overpowering” and the sauce was hot as it was coarse.

• The fish head dish was priced between $5 and $8, presumably, in US dollars.

Other restaurants mentioned in the 1979 NYT article: