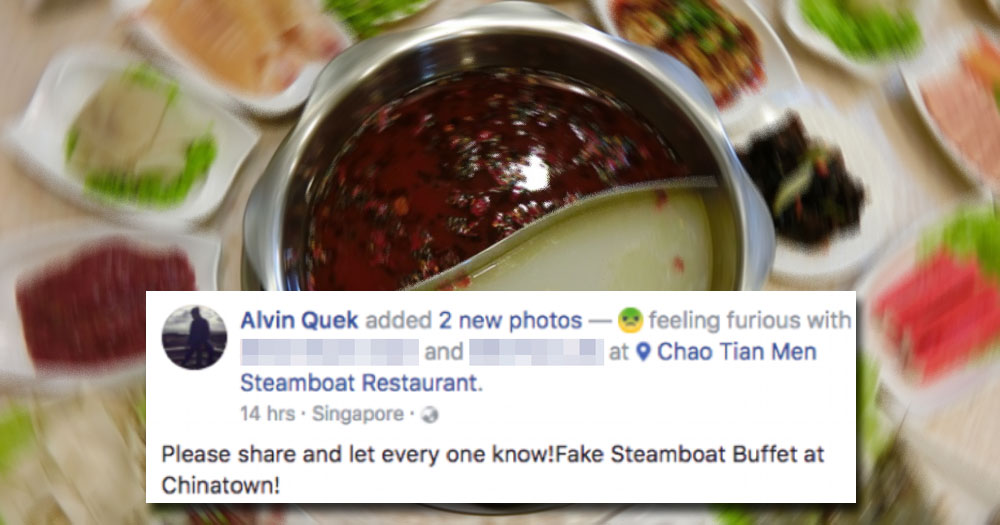 Food establishment personnel in Singapore really ought to watch their tongues.

One eatery in Chinatown, Chao Tian Men Steamboat Restaurant, just had to find out the hard way.

Because here’s another F&B meltdown story that followed a predictable script:

It was posted by Alvin Quek, who claimed:

1. The steamboat buffet food he and his friends ordered dwindled in portion size. 2. The restaurant personnel allegedly told the group of five pax sarcastically that he could not afford to do their business because they were eating too much as customers. 3. The restaurant personnel also allegedly asked the group to pay S$38 instead of S$28, which the group agreed. 4. But the group stomped out after paying S$150 for five pax because they couldn’t take it anymore.

Posting on his own Facebook page wasn’t enough for Quek.

Some reviews even copied and pasted Quek’s post directly.

The restaurant had previously received just four prior reviews.

In the latest update at about 10.30pm on Jan. 19, it appears the personnel of the steamboat restaurant has reached out to Quek and apologised.

This is a translation of the conversation in Chinese:

Restaurant personnel: Bro, is there a need to tarnish our shop’s name?

Quek: You don’t understand. I need to be honest. Was there anything I said that wasn’t accurate?

Restaurant personnel: Then, I’m sorry, I’ve fallen short, hope you can forgive me.

Quek: I had to clarify over Facebook that what I wrote was not fake. A Shin Min Daily News reporter has already contacted me.

Restaurant personnel: Bro, let’s take a step back, let me apologise to you. I hope you understand, we are still friends, if there are any shortcomings, please be gracious.

Quek: I really wanted to talk to the reporter, because you wouldn’t apologise openly and still accused me of lying. Did I say anything inaccurate?

Since you have apologised, I really hope you know where you’ve done wrong. Not everyone will take your outbursts. This is no way to do business.

Quek wrote in an updated status that he is giving the eatery personnel another chance:

Update guys… he has since apologised and i believe he could have been in a bad mood. I will accept his apology and hope that he wont treat other patrons the same way… let’s give him another chance.. the food is actually quite good. Thank you everyone..

And it appears as of Jan. 20, 3am, Chao Tian Men Steamboat Restaurant has taken down their 1-star reviews infested Facebook page.