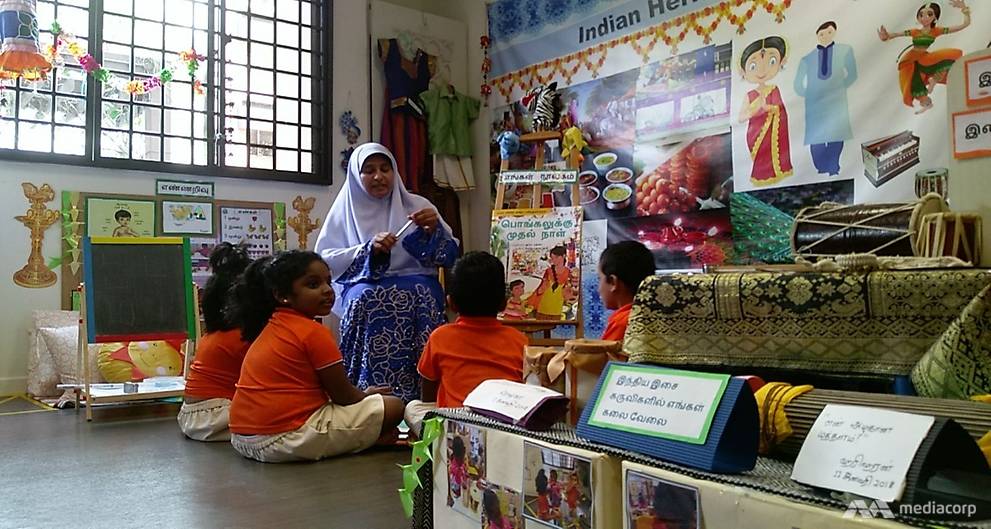 SINGAPORE: Nyana Priya is effectively bilingual and is studying to become a Tamil language pre-school teacher. But the 24-year-old wasn’t always so confident in her use of Mother Tongue.

Her own pre-school did not offer Tamil classes due to a lack of teachers - which meant Ms Priya had to choose between Mandarin and Malay for her second language.

But this proved challenging in the next few years.

"When I went to primary school, I had to take up Tamil because it was mandatory. But since I did not have a foundation in Tamil, I struggled,” she said.

Out of about 1,400 childcare centres here, most offer only Mandarin classes. But the pages are turning.

The demand for Mother Tongue pre-school teachers is growing, as some operators say parents are hoping for their children to acquire a strong foundation in bilingualism to ease their transition to primary school.

My First Skool deputy general manager Thian Ai Ling said some parents may be conversant in their Mother Tongue, but may not have the confidence to teach their children.

“Today, many parents want the schools or the centres to teach more Mother Tongue languages because they find themselves needing help in that area,” she added.

So, the anchor operator started a pilot programme for Malay Language in 2015 at 22 of its centres, as well as a Tamil programme in 2016 at two centres.

Ms Thian said the centres were chosen due to their high population of Malay and Indian students.

A Malay learning corner set up at My First Skool. (Photo: Deborah Wong)

However, Ms Thian acknowledged that the shortage of manpower remains a challenge.

“It’s a known fact that manpower in the early childhood education area is not easy to get in the first place. So when we started our programme, we didn’t have a large number of centres in mind,” she said.

As an interim measure, the operator first recruited teachers within its centres who expressed strong interest in sharing their passion for their Mother Tongue.

Tamil language teacher at My First Skool, Aisha Banu, is one such individual who took up the mantle.

She agreed to teach the subject after she realised the urgency of establishing a good bilingual foundation in pre-school.

“I discovered that some of the Tamil-speaking children don't reply or talk to me in Tamil, so I felt disconnected. I realised that many of them don’t even speak the language at home, so I started by singing songs to them in Tamil,” Ms Banu said.

“At areas where class sizes are small, some of our teachers go out to teach at least two centres. So more children can benefit from the lessons,” Ms Thian said.

Some pre-schools like Little Footprints and Etonhouse, which only offer Mandarin as a second language, employ a mix of local and foreign teachers, due to the lack of local Mother Tongue pre-school educators.

“It is a challenge to hire local Chinese Mother Tongue teachers, as they tend to have higher expectations compared to foreign Chinese; higher exceptions such as salary, location, hours and workload,” said Mindy Chng, cluster principal at Little Footprints.

It has six full-time staff and two part-time Mother Tongue teachers. At least four of them can speak up to three languages.

The school, which offers all three Mother Tongue Languages, believes the language should still be taught even if only one child wanted to learn.

A Tamil lesson at Child at Street 11. (Photo: Deborah Wong)

“All children have rights - the right to education and the right to learn. I think it is a huge sin to deprive anybody of that learning opportunity to learn about their culture and language,” said Nirmala Murugaian, the school’s founding director.

The school also prefers to hire local teachers as it believes language should be taught through cultural immersion.

These include teaching the children to sing a mix of Tamil, Malay or Chinese songs, regardless of their ethnicity. The school also organises frequent field trips to Chinatown, mosques, Hindu temples and churches.

“So in this way, the child understands the diversity, the complex issues of living in a diverse community. Questions of how do you encourage racial tolerance, acceptance and inclusion are brought in,” Ms Nirmala added.

Help is on the way, though. The Early Childhood Development Agency (ECDA) told Channel NewsAsia that it has been working with the Education Ministry, Ngee Ann Polytechnic (NP) and private training providers to offer Mother Tongue Language training for early childhood professionals.

In fact, nearly 700 students were enrolled in courses at NP and private training providers in 2016.

Ms Priya is one of the 29 students enrolled in NP’s Tamil Studies with Early Education Diploma – a new programme launched last year to cater to a growing need for Tamil language educators.

Those interested in being a Chinese language educator can opt to specialise in the Chinese Early Childhood Teaching Track under NP’s Diploma in Chinese Studies during their second year.

This programme was launched in 2016, with 19 out of 48 students choosing the teaching track.

Chinese Studies student Sim Jia Ning said she hopes to take the specialisation in her second year after going through the foundation courses in her first year.

“The teachers brought me to different childcare centres, and invited guests to speak to us about the industry and the life of a pre-school teacher. Through the real-life setting at the pre-schools, the interaction with the kids, I learnt that passion and patience are qualities a pre-school teacher should possess,” Ms Sim added.

Currently, Singaporeans and permanent residents make up about 60 per cent of Mother Tongue Language teachers in pre-schools.

To encourage more to come on board, ECDA said it works closely with all training partners to make the career an attractive choice.

It added that the new National Institute of Early Childhood Development, which will open next year, will also study the needs of the sector and consider the best way to support the training of Mother Tongue Language pre-school teachers.