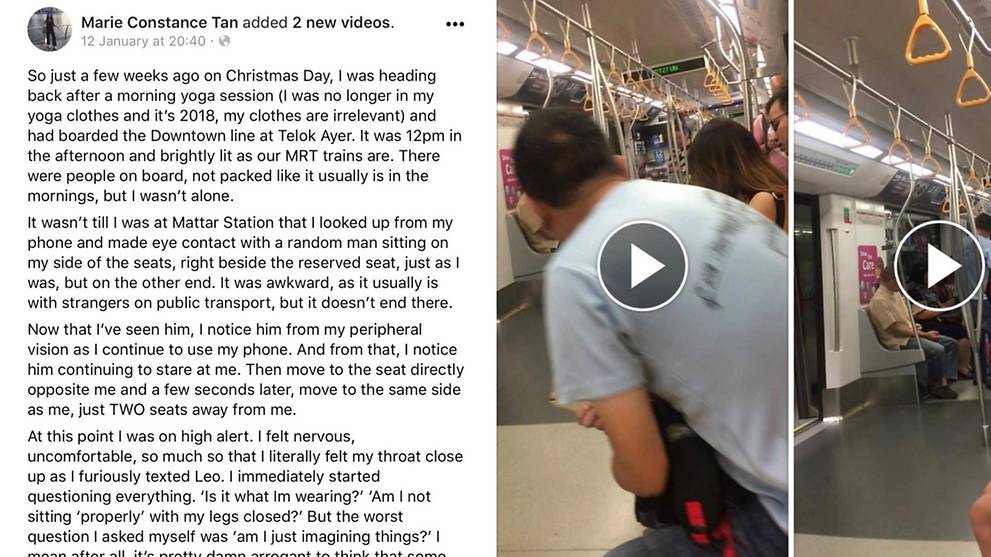 ‘If you’re unable to react, it's ok’: How to handle public harassment

Women’s rights organisation AWARE also shares tips on how bystanders can help in simple and even creative ways, after a Singaporean female’s account of being stared at on a train goes viral.

Screengrabs of a Facebook post by a Singaporean woman alleging harassment by the man in the blue top.

SINGAPORE: Voice out, dial 999 or film what’s happening - these are some things women can do if they face harassment on public transport, with priority given to psychological and physical safety, said the Association of Women for Action and Research (AWARE).

The issue emerged after a recent Facebook post by Marie Constance Tan was shared widely and generated heated debate online. In her post, which included videos and has since been made private, Ms Tan detailed how, for 15 minutes, a man on the train stared at her incessantly and moved seats twice to get closer to her. She also said he had his phone camera directed at her. Ms Tan made a police report after.

"Very often harassment is wrongly perceived only as non-consensual physical touching, like in cases of molestation," said Anisha Joseph, manager of the Sexual Assault Care Centre ​(SACC) ​at AWARE. "This could be an example of visual harassment that falls under the Protection from Harassment Act."

In 2016, the centre received 338 cases, of which 17 per cent were non-physical forms of visual, verbal and online sexual harassment.

Added Ms Joseph: "It's never easy to deal with harassment. It is also difficult when such harassment takes place in public or under the scrutiny of others."

She advised women in such situations to choose any or all of the following options based on their comfort level: Speak to a bystander, alert the transport staff, call the police, video-record the incident, document ​the perpetrator's details, move away from the perpetrator and/or confront them.

"Remember, if you were unable to react in the situation, it's ok," said Ms Joseph. "Freezing is normal, as are 'fight or flight' reactions."

"After making a police report, the victim can also pursue the matter by making a Magistrate complaint seeking further police investigation into the case to apprehend the perpetrator."

When asked how people in her vicinity were reacting, Ms Tan told Channel NewsAsia: "Everyone was on their phones, busy doing their own thing."

Ms Joseph suggested that intervening did not always mean "calling out the harasser in a direct and aggressive way".

"Bystanders can stop the assault in simple ways - for example, approaching the victim, and asking them if they are ok," she explained. "They can then offer to accompany the victim to inform staff."

"Some bystanders have also shared that they used creative ways to intervene in such situations, like asking for the time or directions from perpetrator, standing between the view of the perpetrator and the victim, or pretending to talk over the phone describing a ​similar situation as if it were hypothetical and had happened to a friend."

"HAVING A DISABILITY DOES NOT ABSOLVE SOMEONE"

Ms Tan’s Facebook post drew comments and private messages left by other women alleging similar experiences with the same man in the video.

Other remarks by Facebook users claiming to be the man’s schoolmates said he had an intellectual disability. Ms Tan insisted his actions were "still not right", but she decided to remove two of three videos after someone claiming to be a relative of the man reached out with an explanation.

Channel NewsAsia spoke to a polytechnic course mate of the man who said he sometimes did not appear to behave in a "normal" way when they were in school from 2007 to 2010.

The woman, who did not want to be identified, said he was "more like a lonely person who wanted to interact and make friends".

When this was shared with Ms Tan, she countered: "How would I know that as a stranger on the train? If you notice someone staring and moving closer to you, even after making eye contact, of course you feel threatened."

Added the anonymous acquaintance: "Other people don’t understand his behaviour, and to identify him on social media is like bullying him - it’s not like he can fight back. I think society needs to be more forgiving to people like him."

"Having an intellectual, developmental or psychosocial (chronic mental impairment) disability does not necessarily absolve someone of responsibility for bad or harassing behaviour," she said.

"To assume this would be to treat people with disabilities differently, based solely on them having a disability, and this is discrimination."

Dr Medjeral-Mills elaborated: "No women should feel endangered or uncomfortable - regardless of what she is wearing, or whether the man in question may have less understanding of social norms and what is appropriate behaviour.

"Having a disability does not affect how right or wrong this behaviour was, but it can affect how we should deal with it," she noted/

"In addition, DPA hopes that if he is counselled about his harassing behaviour and warned that this is not appropriate, it should be in a manner that he can comprehend. This could be done in conjunction with disability organisations that are trained to communicate in a manner that is more accessible."

"THERE’S NO RIGHT OR WRONG WAY TO RESPOND"

Ms Tan said her original intention was to put up a public Facebook post "as a warning" and "to raise awareness".

"I felt I should just share, especially if young girls encounter him, I want them to know to at least move away and get to a safe place," she said.

But the comments section on the post also turned up what Ms Tan called "an onslaught of harassment" vilifying her actions and even her appearance.

She hit back with a Facebook photo album - initially public, now private - which contained screenshots of some of these comments along with the users who made them.

"These are parents, teachers, using their personal accounts… you want to put your kid’s face, your wife’s face, you face the consequences," said Ms Tan. "You can’t just go around thinking 'I can say all this to someone and get away with it'.

"Now the issue is less with the guy: If he truly has mental issues, I really feel sorry for him and I wish he had gotten help a lot earlier. It’s not my intention to crucify him. I would rather action be taken against these people."

Quizzed on the efficacy of social media posts in dealing with harassment, AWARE’s Ms Joseph said: "Everyone reacts differently... and there's no right or wrong way to respond or behave. Having a public discussion about such experiences may be one way of addressing harassment."

"We've seen from #metoo how such conversations contribute to a larger culture where women feel more bolstered to seek further help and support," she said, referring to the social media hashtag which went viral in October last year and has remained as an outlet for reporting sexual misconduct the world over.

Dr Gulizar Haciyakupoglu, an expert in gender equality advocacy in cyberspace, cautioned that posting videos may not provide full context as "the viewer is observing the issue from the angle of the recorder".

"On the other hand, it may serve as a deterrent by reminding the perpetrator that others are watching, and it may help document the case," said the research fellow at the S. Rajaratnam School of International Studies.

She continued: "Abuse happens once a personal space is violated and numerous women around the globe are suffering from this."

"Speaking out on harassment on a global platform via movements such as #metoo is necessary to assure people who have suffered from harassment that they are not alone and that they can speak out."

AWARE’s Sexual Assault Care Centre offers emotional support and legal information through its helpline at 6779 0282 (Open Monday to Friday, 10am to midnight) as well as legal clinic and befriending and counselling services.