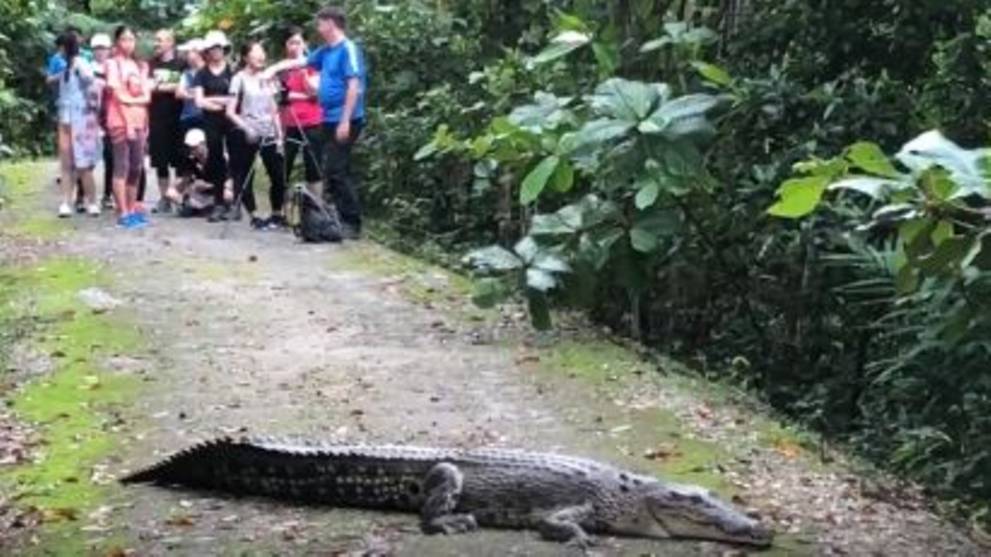 Screengrab of the video showing the crocodile laying still while people watched it from a distance. (Photo: Facebook/Hey Jude via Nature Society Singapore)

SINGAPORE: Barricades will be extended to a section of the visitor trail at Sungei Buloh Wetland Reserve after a crocodile was spotted on the path, said the National Parks Board (NParks) on Monday (Jan 22).

This comes after a video was posted on Facebook over the weekend, showing a crocodile lying across the designated trail, with a group of visitors standing close by. In the 20-second video, the reptile was seen lying very still before suddenly darting into the bushes.

Sungei Buloh said it is aware of crocodile sightings along a visitor trail on Saturday and Sunday.

"As a practice, we monitor visitor trails daily and have been erecting barricades at sections where crocodiles were seen to bask to prevent crocodiles from climbing onto the visitor trail, and will extend barricades to this section," said the director of Sungei Buloh Wetland Reserve How Choon Beng in an email to Channel NewsAsia.

He added that a motion-activated camera will also be set up to help monitor the situation, and that warning signs and advisory notices have been posted at areas where crocodiles are most often seen.

"Visitors should heed these signs and keep to designated paths," Mr How said. He explained that these estuarine crocodiles are usually found in the water or at the mudflats away from the visitor routes.

Should visitors encounter a crocodile on the path, they should stay calm and back away slowly, said Mr How. They should not approach, provoke, or feed the animal.

If members of the public need help, they should call the Wetland Reserve Information Counter immediately.

There were several crocodile sightings around Singapore last year, which included locations such as East Coast Park, Changi Beach and Pasir Ris Park.