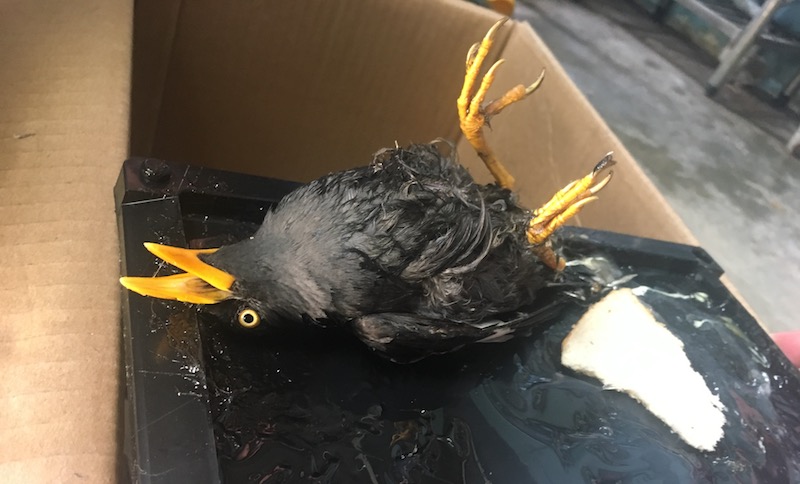 Residents of a heartland housing estate woke up on Saturday morning to the disturbing sight of three birds stuck in glue traps.

Two large traps, each about a foot long, had been left out at the void deck of Block 156 Lorong 1 Toa Payoh, baited with bread to lure the birds. On a grassy patch near the traps, some Cheezels were scattered about.

One of the traps caught two adult Black-naped Orioles, while the other snared an adult Javan myna — which had somehow ended up with its feet in the air in a most undignified fashion.

They were found, still alive, at around 9am on Saturday morning. The ACRES animal rescue team was alerted by a resident.

The feisty Javan mynas — by far the island’s most abundant bird — are considered a pest species in Singapore. But Orioles are not. Perhaps because there haven’t been enough complaints about them yet?

It seems that the Tanjung Rhu resident who recently complained about Asian koels cooing in the morning — a crime he said “compromised the well-being of residents” — could perhaps be from the same school of thought as whoever laid the traps at the HDB block in Toa Payoh on Saturday.

The birds were taken to ACRES’ animal rescue centre, where the glue was removed using cooking oil.

Glue trap victims have a decent chance of survival once the glue has been removed, but they may lose feathers during what can be a stressful process. Some won’t fly again.

Such traps are perfectly legal in Singapore, and can be purchased at your local Daiso or online for little over two dollars. Though marketed as a cure for cockroaches, lizards, and rats, glue traps tend not to care what they snare. Birds, squirrels and even small snakes have gotten ensnared before, attracting bigger animals to join a party that never ends well.

Anbarasi Boopal, ACRES’ deputy chief executive, told Coconuts Singapore that the charity is strongly against the use of glue traps.

“Glue traps are used to trap rodents, or in this case so-called ‘nuisance’ birds that are present because they are attracted to food sources,” she said.

How easy it is for a city-living bird to get food and a place to nest determines the size of its population, Boopal explained.

“Without altering either of these variables, plainly removing the birds like this will not solve the problem. Glue traps are inhumane and cruel, leading to a slow, painful death for any animal that gets trapped,” she said.

She proposed to regulate the sale of glue traps, to make it harder for people to get access to them.

Glue traps are banned in countries such as New Zealand and Ireland, where they are seen as cruel and inhumane.