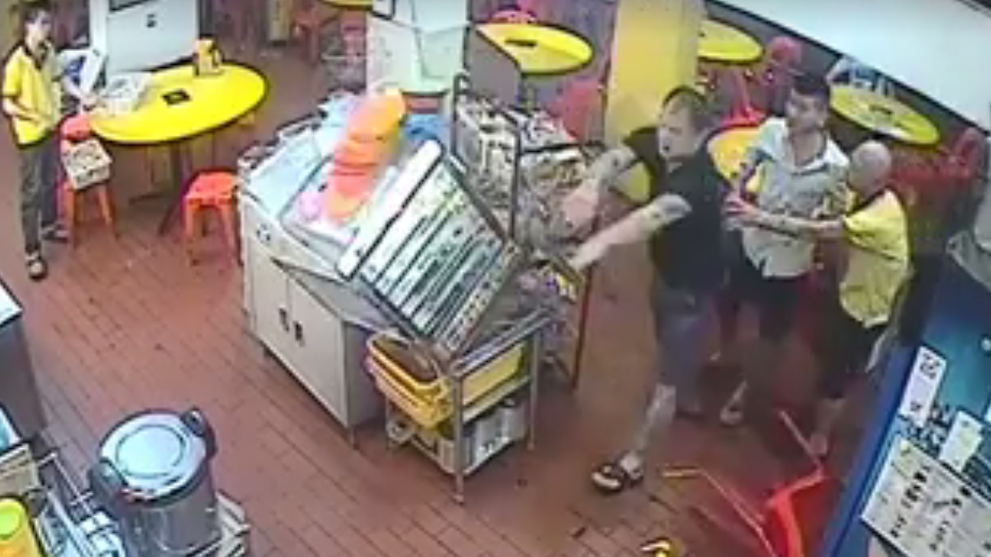 Screengrab of the video showing the fracas at the Balestier Bak Kut Teh (Kian Lian) stall.

SINGAPORE: One of two men who caused a commotion at a popular Bak Kut Teh restaurant along Balestier Road last year was fined S$4,000 on Tuesday (Jan 23).

Tay Soo Yong, 51, who was unrepresented, pleaded guilty to one count of using threatening behaviour towards 27 year-old waitress Cheng Weihui.

According to court documents, Tay, along with his friend, 53-year-old Toh Kian Teck, as well as two other male friends, had been drinking in the Toa Payoh area before arriving at the shop at about 2.30am. They were observed to be intoxicated when they arrived.

Ms Cheng had replaced the cutlery on their table before walking away to retrieve an iPad used to take their orders. Toh yelled in Hokkien that he wished to order some food, but Ms Cheng did not understand the dialect.

Toh, who perceived Ms Cheng as having ignored him, threw a chopstick in her direction.

Tay, who was also angered by the perceived slight by Ms Cheng, then stood up from his seat and threw a whole bunch of chopsticks in her direction twice.

Toh is also said to have flung a cutlery holder in the direction of Ms Cheng, and hurled several items around in the shop, including an industrial food steamer that smashed into pieces.

Both men also shouted “do business, don’t be so arrogant".

Fearing for the victim’s safety, a dishwasher working at the shop tried to stop Toh. Tay also tried to pull Toh back.

Both men, along with their friends who did not participate in the fracas, left the shop shortly after Toh toppled more furniture.

CCTV cameras captured the incident and the footage was shared online. The shop was left in disarray and the owner suffered a loss of more than S$2,000.

In mitigation, Tay told the courts that he “realised (his) wrongdoing”, and pleaded for leniency as he is the sole breadwinner of the family and has to support his wife and seven-year-old daughter.

Deputy Public Prosecutor Dora Tay asked for the maximum fine of S$5,000, saying that Tay behaved in a “brutish manner”, and his actions “egged on” that of Toh’s.

In sentencing, District Judge Chay Yuen Fatt gave “more credit” to Tay for pulling his friend back, adding that Toh could have caused more damage otherwise.