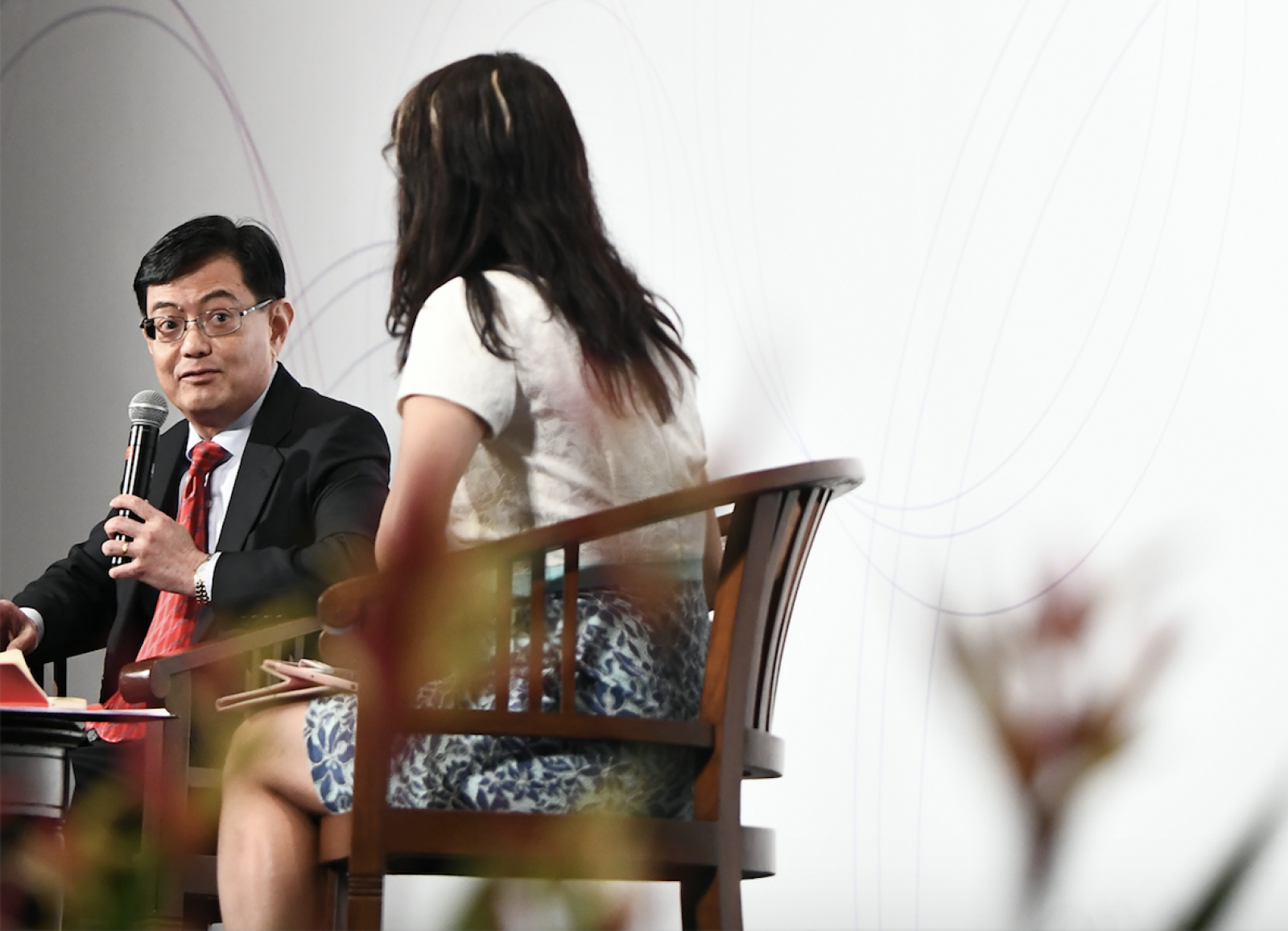 It was a moment that livened up a potentially drab QnA session at the Singapore Perspectives 2018 (SP2018) conference on Jan. 22.

Minister for Finance Heng Swee Keat had delivered his speech on government revenue and expenditure, and deftly handled the obvious questions about his health and the possibility of him becoming our next Prime Minister.

He could be forgiven for thinking that the rest of the session would be plain sailing.

But one student from Republic Polytechnic stood up and threw him a curveball.

The student, who identified herself as Safrah, asked a long question that essentially boiled down to this:

“So my question would be, what would be the priority for the government to pursue from now on. Is it high GDP first, then deal with mental issues later? Or take care of (the) welfare of (the) population first?”

By “mental issues”, she seemed to refer to spending on healthcare and welfare in general.

Safrah also referred to a previous speaker at SP2018, Professor David Canning, as an inspiration for her question.

The visiting professor at the LKY School of Public Policy had earlier discussed “Longevity and Social Welfare in Singapore.”

Canning elaborated on his belief that instead of a single-minded focus on GDP, governments had looked at things the wrong way round. He said:

“One of these institutions that we’re very locked into is maximising GDP or GDP per capita. It’s a very measurable concept. But what I see around the world is that GDP growth is going to slow down because of population aging, and that it is going to be an enormous problem.

The purpose of human life is not to maximise GDP. The purpose of GDP is to maximise human welfare and the way we live our lives. You’ve got it completely the wrong way round if you’re trying to change society to increase GDP.”

In his answer, Heng acknowledged that the measurement of GDP itself had its own limitations, and questioned whether GDP is a good measure for a society’s sense of well-being.

He mentioned that in order to learn more about other systems of measurement, he travelled to Bhutan.

Heng apparently bought a few books on the subject and spent some time speaking to the Bhutanese people about how the new system has affected their lives.

But ultimately, Heng seemed to lean more towards the GDP end of the scale when he said that:

“There are some things like healthcare which require real resources. You can’t ask someone to be a healthcare worker and say you’ll pay them by letting them watch YouTube. Somebody has to be paid, we are not totally divorced from material needs and wants.”

So despite the limitations of GDP as a measurement, it’s here to stay for now.

GDP and Welfare are both important

While concluding his answer to Safra, Heng had an opportunity to take a stand. Which was more important, GDP growth or the welfare of Singaporeans?

To nobody’s surprise, he went for the third option and said that we could have both.

Heng made three observations about Singapore’s spending and revenue collection:

Unlike other “city economies”, Singapore has a sizeable defence and national security budgets to keep funding.

Singapore has unique environmental concerns and needs to fund agencies like NParks and the PUB.

Singaporeans are generally well-behaved when it comes to paying taxes, but this has to continue.

According to Heng, careful management of spending and revenue is how you achieve both things at once:

“If we can continue to do that, be very careful about how we collect revenue, and be very careful on how we spend, and make sure that we focus on the outcome, then I think we can do both together. Grow our GDP and grow our sense of well-being.”

Certainly, a safe answer from a prudent Finance Minister, and fully consistent with what we can expect from someone who is driving economic transformation in Singapore and meeting the spending needs of the future.

Okay, nothing to see here.

So what do u think of his answer to the student? Hahaha true as he put it?