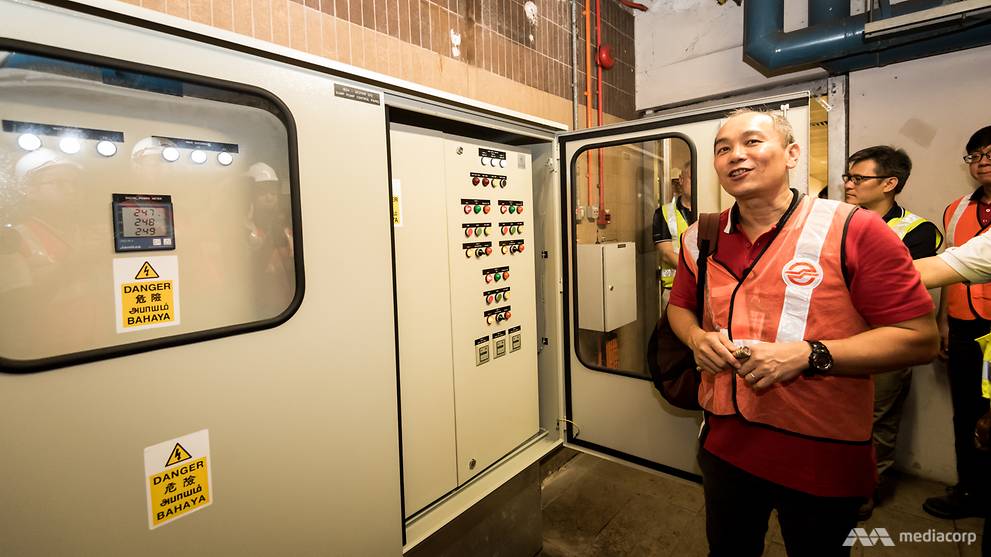 Flood prevention measures to be rolled out at 4 more locations by April: SMRT

These include relocation of a control panel for quicker access of manual pump activation and the installation of redundant float switches that automatically activate pumps.

SINGAPORE: Flood prevention measures that are now in place at Bishan MRT station following an unprecedented tunnel flooding incident last year will be implemented at four other locations by April this year.

These measures, which include the relocation of a control panel that gives staff quicker access to activate pumps manually, will be put in place at Lavender, Redhill, Kembangan and Expo MRT stations.

Giving the media a behind-the-scenes look at the changes at Bishan MRT station early on Wednesday (Jan 24) morning, rail operator SMRT showed how the panel had been moved from an area that required access to the track to a restricted area at an end of the train platform.

SMRT’s director of buildings and services Siu Yow Wee said that this would mean quicker action in the event that the automated pumping system does not work. These pumps direct rainwater to street-level drains.

Previously, the control panel was located in an area which required track access. (Photo: Ruyi Wong)

At its old location, during operational hours, it typically took staff at least 20 minutes to get to the control panel, as staff would need to gear up, gain track access and take a train to the area. Train services would also be disrupted.  With the change in location, track access is no longer needed.

“Anytime we see that there's a problem or some alert, or we think the pump is not working, we can just send a station manager to the buffer area to press the button,” he said. The buffer area lies between the track and the train station.

The relocation of the panel at Bishan MRT station, which included work like cabling, took three hours of work for 41 nights, he added.

Redundant float switches, which activate pumps automatically, will also be installed at the four other locations so that if one fails, additional float switches can ensure that pumps are activated when needed.

Mr Siu, who was appointed to his role in the wake of the flooding incident which disrupted service for about 15 hours and affected 231,000 commuters, said that pump maintenance work has been outsourced to the original equipment manufacturer.

“Equipment reliability will definitely go up. This means that the commuter can travel in a more reliable and comfortable way,” Mr Siu said.

Previously, these contracted workers were only involved in corrective repair works.

Maintenance tasks include visual inspection, cleaning float switches and operational tests. Such tasks will also be conducted more frequently, from quarterly or yearly to monthly.

SMRT employees who were previously involved in maintenance work will take on inspection and supervisory roles, Mr Siu said.

The Land Transport Authority, which said the flooding incident was entirely preventable in an investigation report released in December last year, found that there were adequate flood protection measures and that float switches, pumps and the pump motor control panel were functional.

However, it noted that a lack of maintenance, audits and managerial supervision could have led to the flooding incident. Floodwaters were up to 1m deep and spanned 100m of tracks in both directions.

SMRT later found that its staff had falsified maintenance records over seven months, and took disciplinary action against them.