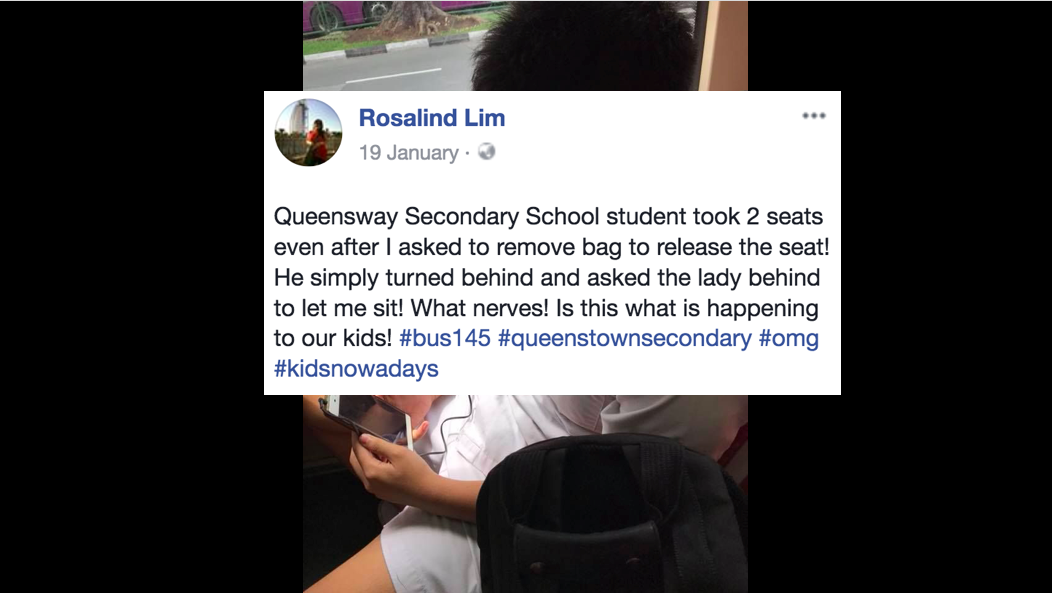 Woman posts photo of Queensway Sec student to FB for not sharing bus seat, gets flamed instead

Person tries to ask younger person to give up seat/move their bag.

Person fails to elicit satisfactory response, then gets annoyed.

Person snaps photo of younger person and posts it publicly on Facebook.

Person expects online community to sympathise with them, and possibly pile hate on the younger person.

Despite us thinking these days that doing the above is no longer socially acceptable — is there a need to shame? Can’t you tell him off on the spot? Can’t you find another seat? — it’s happened again.

This story goes, as told by one Rosalind Lim, she had boarded the bus (according to her hashtags, it was service 145) and found a Queensway Secondary School student sitting down with his schoolbag placed on the seat next to him.

In her Facebook post dated Friday, January 19, she said the unidentified boy turned his head back to ask the lady seated behind him to make room for Lim.

Outraged, she took a photo of the boy and posted it to her Facebook page:

“Queensway Secondary School student took 2 seats even after I asked to remove bag to release the seat! He simply turned behind and asked the lady behind to let me sit! What nerves! Is this what is happening to our kids!”

Unfortunately, Singaporeans didn’t respond in the way she might have hoped.

“Ok… if there’s a seat immediately behind, why didn’t you take it?

Are you deliberately wanting to make the boy move he’s [sic] bag?

If that was the case, then did you not make that choice? And now you’re here trying to make him the villain…?

“That’s a point most people missed out. It’s always better to find a peaceful alternative where both parties will be happy than forcing your way through it. But yet again we don’t know the full story of this incident so it’s still too early to start pointing fingers”

“If there’s a seat (available) behind then why not just move behind and carry on with your trip? Leave the teaching to his own parents and learn how to give and take Old enough to not be that demanding since there are other seats (available)”

“This is the exact reason why kids nowadays have so much hate for adults.”

“All these seats and you decided to be an ass”

“yes the kid may be in the wrong, but must you have to go such an extend [sic] and shame him on fb? I also seen adults doing that too… if there are other seats available then why must fight over a seat with the kid? just move on..”

“Trying so hard to shame others end up everyone is judging u instead.”

Some were more sympathetic:

“It is not bcoz of seats available or no seats available… It is bcoz of the basic fundamental principle… Just simply occupying seat with his belonging??? It is for others to sit for goodness sake… Nothing got to do if he is a kid or grown up man.”

While another offered tips and strategies to get around the kid’s behaviour:

“Very common, usually I just stand right beside and they’ll let me hv the spot, if not I’ll just pick up the belongings and ask who does it belongs [sic] to, usually that does the trick and I’ll get the seat.”

While at least one saw the “wrong” on both sides:

But maybe this one guy knew the truth all along:

We’d give him a chance on that basis.

Look at you, on your high horse! How's the weather up there?

U had better first look at urself

The student is kind enough to tell you that there is empty seat behind..why must you insist to sit next to him.. He probably need some space for his heavy school bag and to read his book. Give him the space.. You still got the cheek to write to the school?? You are very provoking...Bloody woman.

do u give seat to other need before?

Blame sch? He brings shame to his parents. Parents are first teachers of their kids!

U can always make a choice to be gracious. There is no need to shame the kid in social media. Give positive vibes even if u get negative ones.

Both also at faults... it can be solved on the spot why post??

Just goes to show what kind of society we have here. People can't solve their own problems, and resorted to shaming the other party instead.

Of course can be solved on the spot. The child wont.

It shows poor parenting instead.