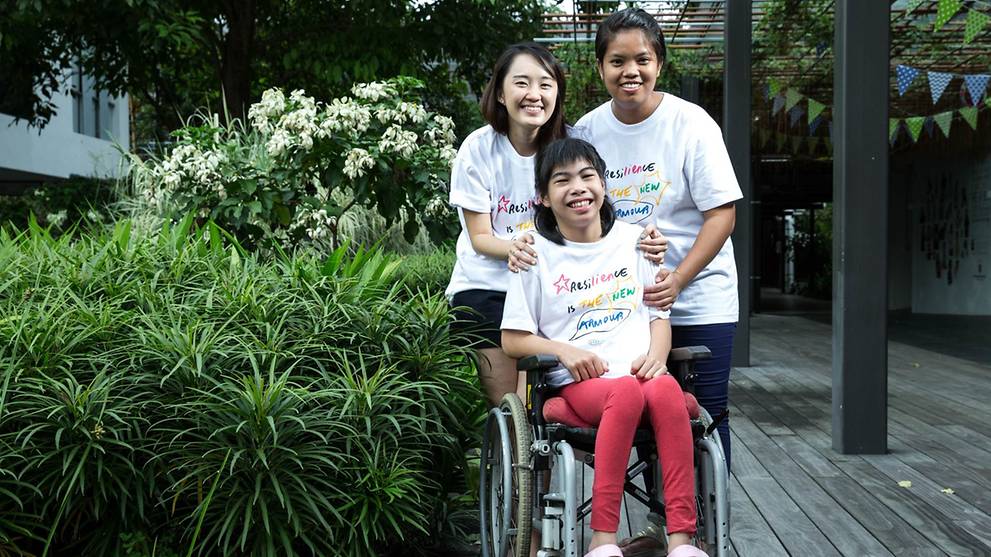 Wheelchair-bound Sow Zixuan’s ceramic installation Garden is among the works showcased at Superhero Me’s inclusive art exhibit Is Anyone Home? at this year’s Singapore Art Week.

12-year-old Sow Zixuan, who has cerebral palsy, collaborated with ceramicist Chloe Tan and Zixuan's nanny Ei Ei Htwe, for an installation work in the exhibition Is Anyone Home? (Photo: Superhero Me)

SINGAPORE: It’s a lively Saturday afternoon at the National Museum of Singapore, where a group of children are taking part in a bird mobile-making workshop.

Among them is Sow Zixuan, a wheelchair-bound 12-year-old with cerebral palsy, who is concentrating on her own green-coloured bird creation, surrounded by her new friends and her family. “I love to make art,” she shyly whispered.

Sow Zixuan (right) talking with Beatrice, one of her best friends at Superhero Me, during a bird mobile-making workshop on Jan 20. (Photo: Superhero Me)

The mobile-making workshop is part of Is Anyone Home?, an ongoing Singapore Art Week exhibition comprising installations and performances done by children with special needs or those who come from less privileged backgrounds, in collaboration with local artists.

It’s the latest project by inclusive community arts group Superhero Me, and among the works on display is Zixuan’s very own Garden.

Over a two-month period last year, she and her artist mentor Chloe Tan worked on a series of small ceramic mobiles and jigsaw pieces. These depicted family members as well as other objects she had come up with.

Ceramicist Chloe Tan and young Sow Zixuan working on their Garden installation for the exhibit Is Anyone Home? at the National Museum of Singapore. (Photo: Superhero Me)

Tan, a ceramicist and art educator, said the idea behind the work came during their first meeting, when Zixuan asked her how to draw a sunflower.

Realising her mentee had never seen a real one before, she promptly brought one at their next session.

For the next few meetings, the two of them – with help from Zixuan’s nanny – began choosing and assembling images, which they would shape into small clay versions.

Zixuan's ceramic mobiles including images of flowers, turtles and blue cars, as a nod to her father, who's a taxi driver. (Photo: Superhero Me)

Tan would slowly notice her reserved young collaborator coming out of her shell, and by the end of their sessions, Zixuan would be the one giving them instructions.

“We realised that was where the synergy was – she enjoys people working together with her,” said Tan, who added that working on ceramics also turned out to be quite beneficial.

“Cerebral palsy affects the muscles. And there was one session when her dad was around and he was surprised to see her squeezing (her hands). That’s when we realised clay can be a good art form for her because it allows her to exercise her muscles,” she said.

When artist Chloe Tan (right) realised her mentee Sow Zixuan had never seen a sunflower in real life, she brought one to her for their next workshop session (Photo: Superhero Me)

The changes in Zixuan’s behaviour did not go unnoticed by her family, who has been working with Superhero Me since 2016, when the arts group held a workshop at Zixuan’s school, the Cerebral Palsy Alliance School Singapore.

“She’s now more excited to come out of the house and be more sociable,” noted her mother, Wendy Ang.

Zixuan’s nanny, Ei Ei Htwe, added: “When she’s at home, she’s never goes out and seems angry every time. Now, when she goes out and meets her new friends, she’s relaxed and happy.”

Zixuan's clay creations, which she later colours, before her artist mentor fires them up to create the final ceramic pieces. (Photo: Superhero Me)

Empowering young folks like Zixuan is at the heart of Superhero Me’s mission since it started as a three-month programme under the Lien Foundation back in 2014.

Since then, it has reached out to 12,000 people. It has also been tapping into a regular core of 40 children, who come together for workshops at the Enabling Village located in Lengkok Bahru.

“We work with children with disabilities, children from less privileged families, and typically-developing children. And what we try to do with these sort of workshops is to get the kids to look and acknowledge each other, to start a conversation,” said Superhero Me co-founder Jean Loo.

The interactions have resulted in some positive changes among the children.

At the opening night of Superhero Me's exhibition Is Anyone Home? (Photo: Superhero Me Facebook Page)

“For children with special needs, when they mix with so-called normal or typically developing children, it actually stimulates them to surpass expectations people have with them. They might become more chatty and willing to open themselves up, because the stimulus they get is very different from their friends who might also have autism or cerebral palsy,” she said.

Zixuan’s mentor Chloe Tan recalled one particular instance at the Enabling Village, where the exhibition’s participants would gather for their respective workshop sessions – she was looking forward to meeting her new friends, siblings Benjamin and Beatrice, who are also participating in the exhibition.

“She had asked if Benjamin was coming and when he walked in, she excitedly screamed his name!” said Tan.

They have also noticed how typically developing children acquire a sense of empathy. “They learn how to think of not just themselves but other children – working in a team and working with children who are non-verbal. It’s a lot of on-the-spot problem-solving skills that they develop,” said Loo.

Everybody say cheese! Is Anyone Home?'s young participants and their artist mentors get together for a group photo. (Photo: Superhero Me Facebook Page) ​​​​​​​

Aside from the ongoing exhibition at the National Museum, Superhero Me has another big event coming up – and true to their inclusive thrust, it will be called Superhero We.

The festival, which will take place in March, and the group is planning to branch out from visual arts and are exploring collaborations with dance groups and musicians.

“It will be a lot of dance, music and movement. We want to do this big inclusive disco for all the kids to mix and move together,” said Loo, adding: “We always emphasise that it’s okay to be different – as long as you are who you are. They learn that success, creativity, beauty can be in any form.”