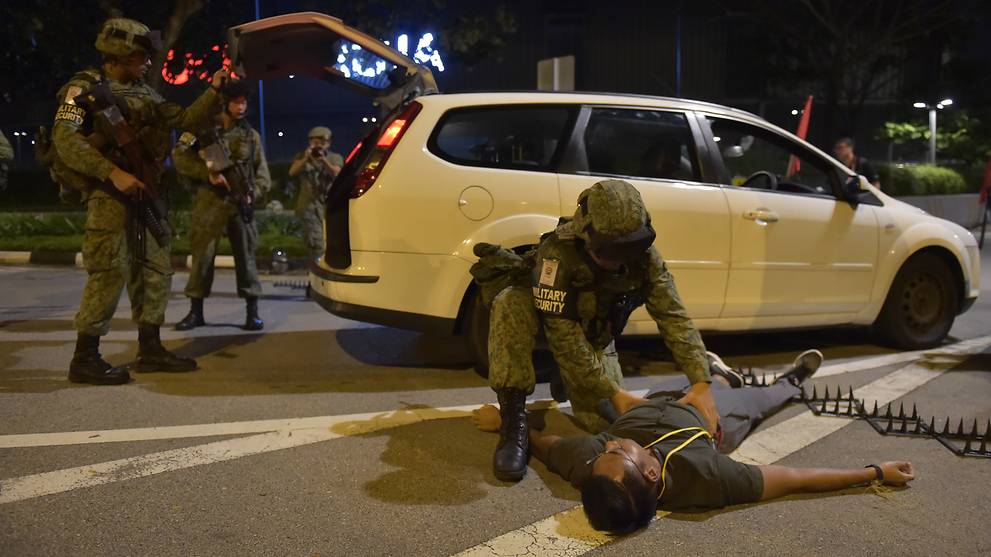 SINGAPORE: About 8,000 soldiers and 700 vehicles took part in a mobilisation and equipping exercise (MOBEX) on Friday and Saturday (Jan 26 - Jan 27), in the largest such exercise since 1985.

The MOBEX is a drill conducted regularly by the Singapore Armed Forces (SAF), and is aimed at validating the operational readiness of units on manning duties, as well as ensuring that SAF’s activation processes are kept warm.

Amid the growing risk of terror in the region, a spectrum of homeland security threats was simulated during MOBEX.

For example, soldiers were activated to respond to an active shooter scenario at the Singapore Sports Hub, where the soldiers conducted cordon and search operations together with the Singapore Police Force officers and Sports Hub security officers.

Soldiers from the 3rd Battalion, Singapore Infantry Regiment (3 SIR) and security personnel from Sports Hub at the personnel access control point, apprehending a member of the public who did not comply with the instructions. (Photo: MINDEF)

"This time round we bring the troops out to a very realistic, iconic location here at Sports Hub. I think this will further reinforce their commitment and conviction to make sure Singapore is safe and secure,” said assistant chief of the general staff (operations) Brigadier General (BG) Ng Ying Thong.

Such exercises also test the coordination between various agencies and business stakeholders in the event of terrorist attacks.

Trooper Corporal (CPL) Gabriel Chua, whose 3 Singapore Infantry Regiment was part of the exercise, called the experience an “important” one for soldiers.

"It's quite rare nowadays to see a conventional war. It's going to be all about terrorists attacking public places - soft targets. So, I think it's quite important that we are prepared for such an event," he said.

The MEC mobilises and equips soldiers with the assigned equipment, all under one roof.

The new MEC also has new self-service kiosks, reducing the in-processing time from one minute to about 20 seconds.

NSman Shentil Samugam, who is on his third mobilisation, said that the entire process from signing in to drawing equipment and going through soldier fundamentals took about 1.5 hours.

He added that this process has helped him save about 80 per cent of time from before.