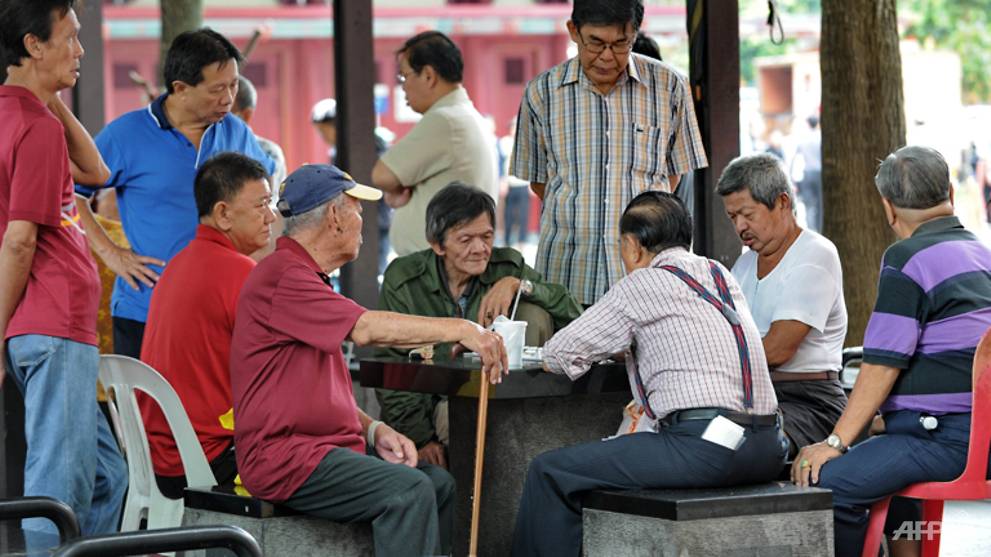 Enrolment into ElderShield should start at age 30: Review committee

The committee also recommended including those with pre-existing severe disabilities under the scheme, and for the Government to take over the administration.

Elderly people gather to play a checkers game next to their housing area in Singapore. (Photo: AFP/Roslan Rahman)

SINGAPORE: ElderShield coverage should start from age 30 instead of 40, the scheme’s review committee said on Tuesday (Jan 30).

The lowering of the age limit will ensure premiums for the insurance scheme are more affordable, as policyholders start contributions to the scheme earlier, the committee said in its first formal update since 2016.

“We think that it's important for citizens and permanent residents (PRs) to start thinking about long-term care and disability, start the coverage early," said the committee’s chairman Chaly Mah, adding that such risks are "under-appreciated".

It is important for them to start thinking about setting aside money for old age, he said, pointing to statistics showing that one in two Singaporeans who are healthy at the age of 65 is at risk of having a severe disability during their lifetime.

All Singaporeans and PRs with Medisave accounts are automatically enrolled in ElderShield at the age of 40, unless they opt out of the scheme.

Mr Mah said the committee is looking at the structure of the premiums, and the amount paid out, which is pegged to the premium. Premiums will "probably" increase, he said.

The committee recommended that those aged between 31 and 40 should be included in the enhanced coverage.

The recommended scheme would also not allow opting out, as opposed to the current scheme, he said.

In his National Day Rally speech in 2016, Prime Minister Lee Hsien Loong announced that the Ministry of Health would look into enhancing the ElderShield scheme to better address the needs of Singaporeans who become disabled during their old age.

ADMINISTRATION BY THE GOVERNMENT

Currently, those covered by the scheme are under private insurers Aviva, Great Eastern or NTUC Income, assigned at random. They have an option to switch providers upon enrolment.

The committee recommended that the Government be the single administrator, to allow for greater flexibility in subsidising premiums and in future scheme enhancements.

The thinking behind having private insurers administer the scheme was to leverage their insurance. Open tenders were put out and a competitive bidding process allowed the Government to select the best value, she said.

The committee, however, received feedback that the scheme should be run in a not-for-profit manner.

A “UNIVERSAL AND INCLUSIVE SCHEME”

The committee recommended that ElderShield be made a scheme that covers everyone, including those with pre-existing severe disabilities, who are currently excluded.

“Universal coverage will provide assurance for the lower-income who may find it challenging to save for their long-term care needs,” the committee said.

The committee also suggested some improvements to the claims process, such as training frontline staff or social workers to help policyholders and their caregivers access ElderShield, and expanding the current 140-strong pool of assessors.

Chairman of ElderShield claims assessment sub-committee Loh Yik Hin said that currently, when claims need to be made, those insured and their caregivers do not know which insurer they are covered by and what their coverage is.

“This heightens the stress of patient and caregiver and we want to tackle this,” he said.

The committee’s full recommendations are expected to be ready by the middle of this year.