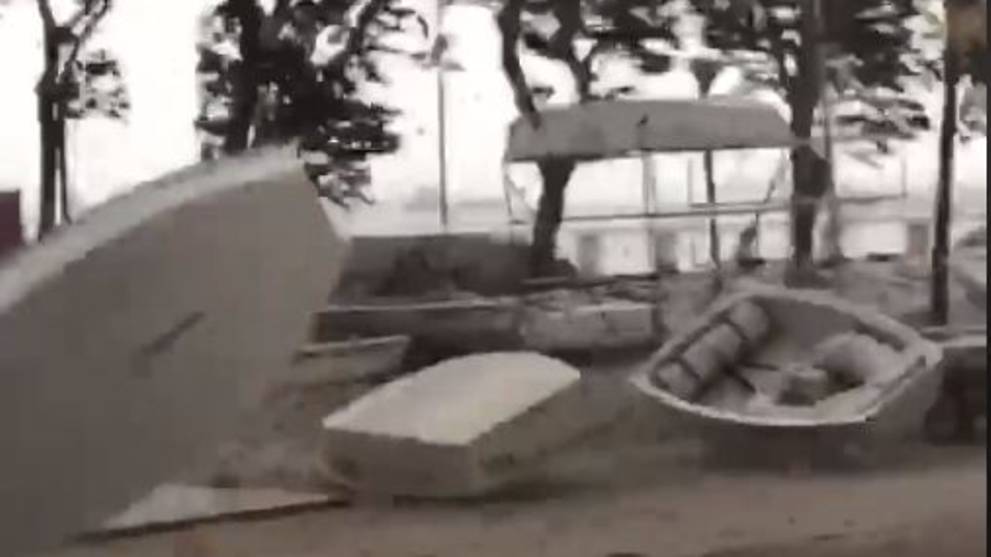 Three boats were seen being swept away by the wind in a video. (Photo: Channel NewsAsia reader)

SINGAPORE: The heavy winds that sent boats and dumpsters flying at East Coast Park on Wednesday (Jan 31) was caused by a waterspout, said the Meteorological Service Singapore (MSS) on Thursday.

A waterspout, a rotating column of winds associated with an intense thunderstorm, was observed over the sea off the east coast of Singapore at around 4.10pm, said the Met Service.

The waterspout weakened as it neared the coast, but still brought strong winds to the East Coast Parkway area, it added.

The strongest wind gusts recorded from the nearest wind sensor in the area was 59.1km/h.

MSS’ weather radar images showed towering thunderstorm (cumulonimbus) clouds developing around 4.10pm over the sea off the east coast of Singapore, it added.

These clouds reached 16km in height, far higher than the usual height of 10 to 12km.

The strong winds experienced in parts of south-eastern Singapore were due to "strong downdrafts" from the thunderstorm clouds, it said.

The atmospheric conditions which led to the intense thunderstorms on Tuesday and Wednesday are not uncommon in the tropics, the Met Service added.

The last sighting of a waterspout was on Jun 18, 2017, off the southeast coast of Singapore.

For the next few days, the weather is expected to be windy with passing showers.

3 boats flying to you is not a joke