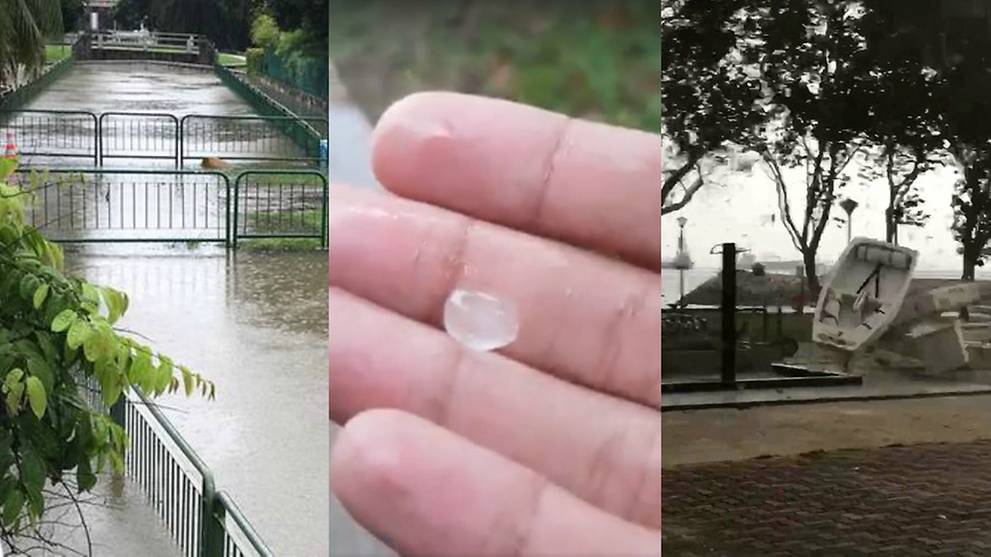 The month not only brought flash floods and hailstones but also the longest spell of cool weather Singapore has seen in a decade.

Here's more about some of the unusual weather phenomena seen in January:

A woman pushing her car which stalled in a flood at Bedok North on Monday morning (Jan 8), after a heavy downpour over many parts of Singapore. (Photo: Twitter/SynCPositive)

This caused flash floods in several places, with the highest total daily rainfall recorded in the Paya Lebar area at 131.8mm.

In general, the rainfall was "well above" normal in January and 502.4mm of rain was recorded at Paya Lebar - 119 per cent above the average.

The weather was chillier than usual on Friday (Jan 12). (Graphic: Meteorological Service Singapore)

From Jan 10 to Jan 14, Singapore also experienced its longest cool spell in the last ten years, with daily minimum temperatures dipping to as low as 21.2°C.

This was recorded at Admiralty and Jurong West on Jan 14.

The chill was due to a monsoon surge during that period, which brought five consecutive days of cool weather to Singapore, said the Met Service.

It added that this monsoon surge, including another surge from Dec 30, 2017, to Jan 1, brought overcast skies, windy conditions and widespread rain to Singapore and the surrounding region.

On Jan 30, hailstones were reported in various parts of Singapore, including Seletar, Yishun and Ang Mo Kio amid heavy thunderstorms.

This was caused by towering thunderstorm clouds coupled with powerful vertical air currents in the north, said the Met Service.

The storm also caused a brief flash flood along Seletar North Link and felled several trees in the area.

Three boats were seen being swept away by the wind in a video. (Photo: Channel NewsAsia reader)

The next day, on Jan 31, another intense thunderstorm brought strong winds and heavy rainfall to eastern Singapore.

A waterspout, a rotating column of winds associated with an intense thunderstorm, was seen over the sea off the east coast of Singapore, said the Met Service.

The heavy winds sent sailboats, some as heavy as 70kg, flying at the National Sailing Centre.

Nearby, a large tree fell on Marine Parade Road, almost completely blocking it.