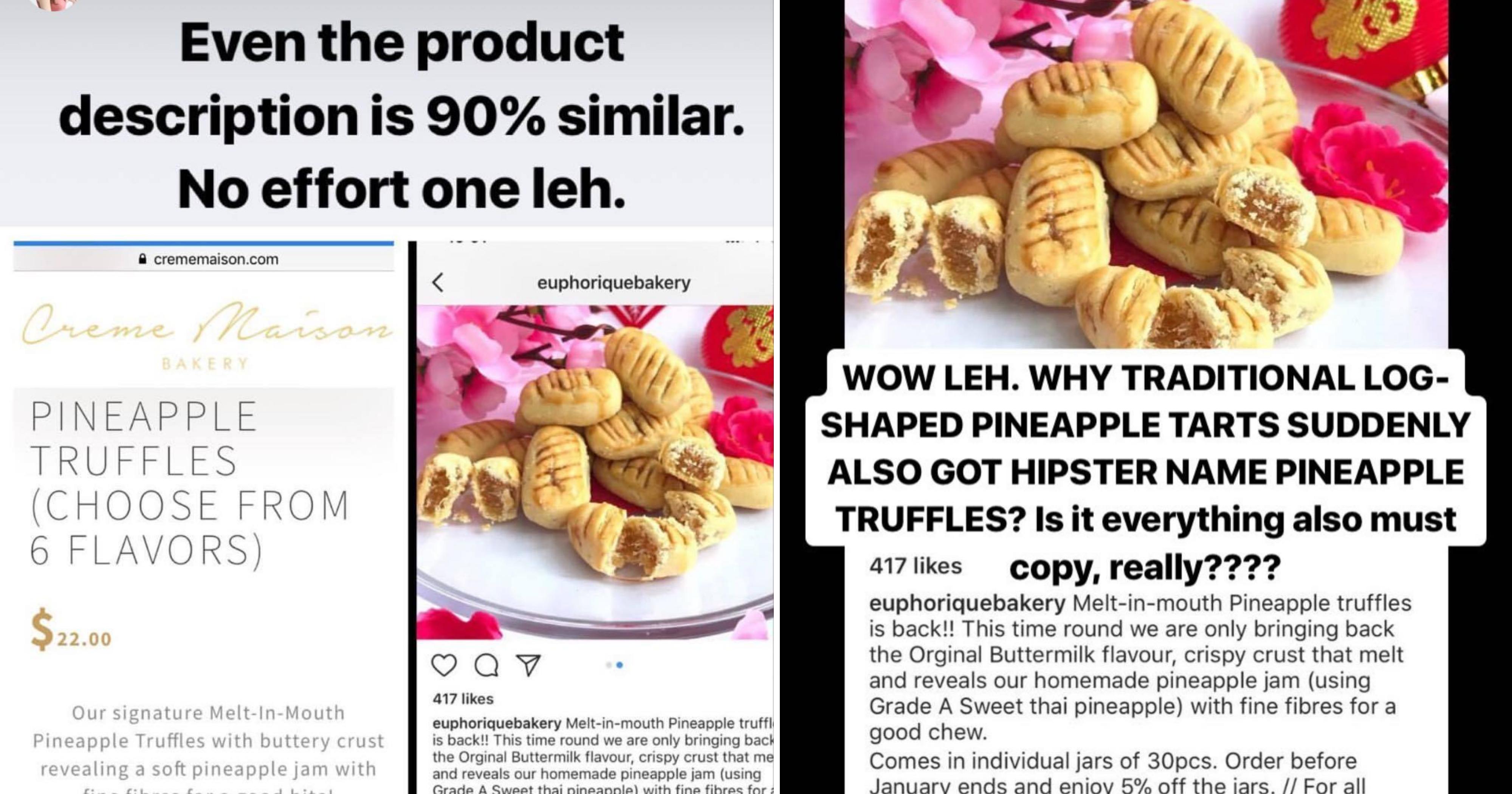 One bakery is copying another bakery’s pineapple tarts in S’pore, influencer alleges

Both bakeries in Singapore allegedly have the same pineapple truffles product for Chinese New Year — which cannot be a coincidence.

The allegation was first made on Jan. 31 by Yap on her Instagram Story.

This was the main comparison between the two bakeries, where Yap pointed out that even the product descriptions have been largely similar:

In case you can’t see, this is the purportedly original product description for the pineapple truffles by Creme Maison:

And this is Euphorique Bakery’s product description:

Melt-in-mouth Pineapple truffles is back!! This time round we are only bringing back the Orginal Buttermilk flavour, crispy crust that melt and reveals our homemade pineapple jam (using Grade A Sweet Thai pineapple) with fine fibres for a good chew. Comes in individual jars of 30 pieces.

Yap also took more screenshots of both bakery’s products and has been commenting in favour of Creme Maison.

One of those positive stories praised Creme Maison for being “original”, with Yap calling herself a “willing and loyal customer”:

Another one called out Euphorique Bakery’s decision to name their traditional pillow pineapple tarts as “pineapple truffle”:

Subsequently, Yap even showed an exchange she had with one Bessie Teo, who is presumably the owner of Euphorique Bakery.

According to Teo, their bakery has been selling pineapple truffles since last year:

Yap, who did not believe her, did some research of her own to prove that Euphorique Bakery (previously known as Enjoue Events) did not offer the item last year:

A quick search online yielded no results for pineapple truffles from Euphorique Bakery or Enjoue Events as well.

On the other hand, Creme Maison’s pineapple truffle appeared as early as two years ago, in 2016:

More complaints on the same bakery

Yap also shared that people came forward with complaints about the bakery:

If you’re interested, you can read the posts and .

And finally, Yap revealed that another bakery business named Le Sucre Du Patisserie had a run-in of sorts with Teo:

Teo had allegedly passed of the bakery’s macarons as her own work.

Yap has maintained that she is in the right: