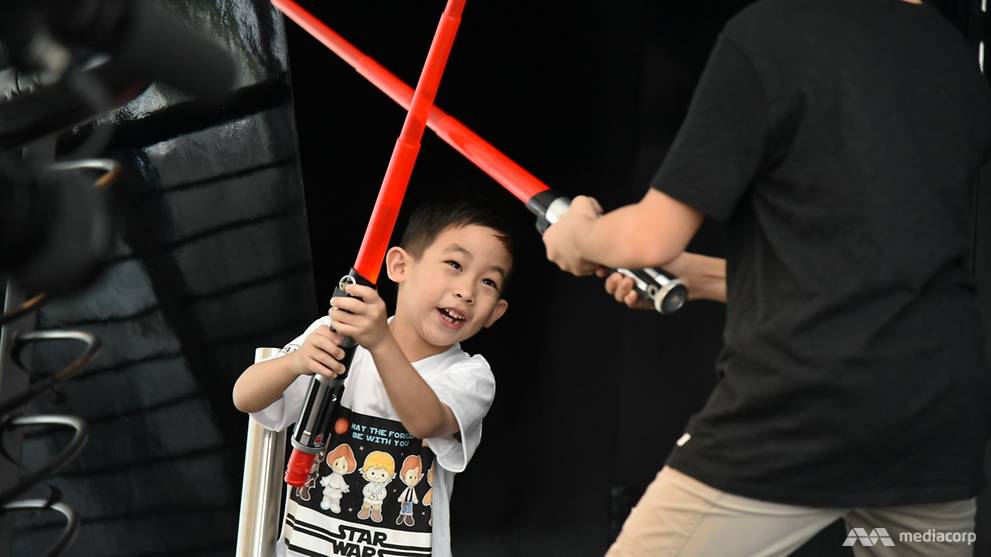 For birthday boy Lucas Chua, sports car rides and Star Wars meet-and-greets were the order of the day on Saturday (Feb 3) courtesy of Make-A-Wish Foundation Singapore.

Lucas Chua having fun with a lightsaber. (Photo: Noor Farhan)

SINGAPORE: Like any other Star Wars fan, six-year-old Lucas Chua gasped in surprise when he met his on-screen idols for the first time, as Stormtroopers and Darth Vader entered the theatre in person to greet him as part of his advanced birthday party.

“Wow look at those Stormtroopers!,” exclaimed the young Star Wars fan, whose 7th birthday falls next week. “But make sure Darth Vader is not invited to the party later!”

Underneath Lucas’ cheery and hyperactive exterior, though, is a boy living in pain and requiring constant medication – he is a cancer patient with Acute Myeloid Leukemia.

According to his parents Steven and Angela Chua, Lucas’ daily routine after his life-threatening diagnosis in June 2017 involves a daily regimen of medication throughout the day, of which some would come with painful side-effects.

Said Mrs Chua: “Sometimes medication does bring pain to him and it gives him headaches and body aches, which would require us to massage him afterwards. So we have to keep that up with a few weeks of medication and after that he’ll get well.

“There are times when his medication would affect his sight, though, because the pills somehow create pressure in his brain and affect his optic nerves,” she added. “Thankfully those pills are for a two-week cycle only.”

For Lucas’ parents, they vividly remember the day that their youngest son was diagnosed with leukaemia.

“He had a big haematoma that formed on his thigh, which wasn’t normal. He was apparently already internally bleeding and for his kind of leukaemia it’s aggressive,” said Mrs Chua. “Doctors said usually, for people who come in (with his condition), they will usually suffer from bleeding in the brain. Back then his (swelling) was already moving up … his blood count was very low and it didn’t improve for three days.

She added: “Lucas started his treatments last year in June … and so he stayed in hospital to go for aggressive chemotherapy for the following three months. Even so, he still has to continue with chemo for the next two years.

“He is currently in a good place and we hope he’ll attain a good level of remission after the treatments."

One of the activities lined up for Lucas Chua by Make-A-Wish Foundation Singapore was a theatre screening of a Star Wars Lego episode. (Photo: Christy Yip)

“So we played together, and created a lot of stories with those figurines and he was so happy. He kept it with him every day and helped to keep his mind off his condition.”

In order to lift his spirits, the Make-A-Wish Foundation Singapore approached the Chua family towards the end of 2017, to organise a Star Wars-themed birthday party for the six-year-old at Lucasfilm Singapore’s Sandcrawler building on Saturday (Feb 3).

Together with car company Autobahn Motors and local football academy FCBescola Singapore – a soccer school with links to Lucas’ favourite football club FC Barcelona – the Make-A-Wish Foundation, which has since granted the wishes of over 1,340 children since 2002 in Singapore, put together a day to remember for the young leukaemia patient.

Beginning with a morning Ferrari ride with his two elder brothers Christian and Elliot, Lucas’ day got even better as he was all smiles and energy during his Star Wars party which was attended by about 60 friends and family members.

Lucas Chua (top right) enjoying a ride in a Ferrari at the back seat with his brothers Elliot (top left) and Christian (bottom right). (Photo: Noor Farhan)

The cherry on top was when a squad of Star Wars cosplayers entered the in-house theatre at Lucasfilm Singapore, right after a screening of an episode of the Star Wars Lego animated series for his friends and family.

“He is a very energetic kid, especially when he sees his friends, the anticipation of the Make-a-wish (party) and leading up to it and the actual wish brought out a lot of joy and excitement in him and today was really a climax,” said Mrs Chua, on the sidelines of Lucas’ advanced birthday party at Sandcrawler building.

“Being able to use his imagination, to conceive what he wanted for his wish and what would happen on the day itself, as well as thinking about who would be attending … all this helped to release his focus on the medication and made his day-to-day living more exciting,” explained Mrs Chua.

Acknowledging how fun and laughter plays a part in helping children deal with illness, Lucas’ father Mr Chua was grateful for the Foundation’s efforts in making his child happy.

“The good thing about children is that they get over the pain easily because they can be distracted,” he said. “His brothers are there to play with him, and when his mind is thinking of play, he doesn’t think about his illness and pain.

“It was really a great experience for Lucas … especially after what he’s gone through for the past few months. We’re definitely happy with what Make-a-wish has done, as it’s a wonderful programme and from the look on his face, Lucas was very happy with how today went.”