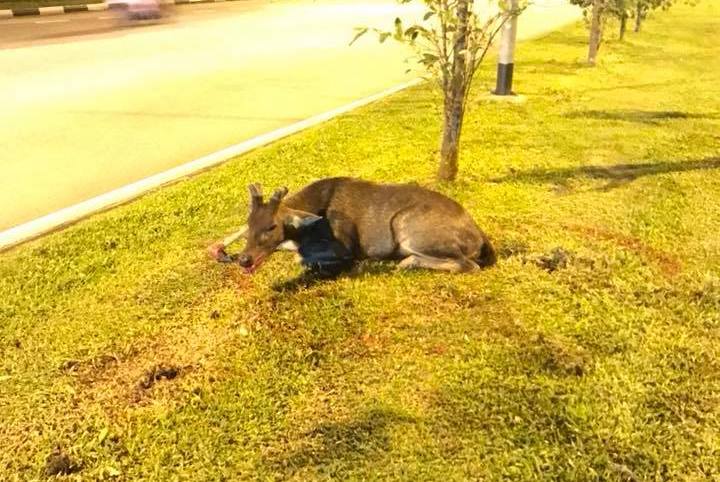 Rare sambar deer dies after getting hit on the road

A rare sighting of a sambar deer in Mandai has ended in tragedy.

The animal had been seen standing in a pool of blood in the middle of Mandai Road on Saturday evening (3 Feb), said eyewitness Muhammad Iqbal Zainudin. The emergency medical technician has been driving to work around 8.30pm.

He stopped the car and took out a torchlight to direct traffic away from the injured animal.

The driver who allegedly hit the animal was also no longer there, he said.

The deer later moved to a grass patch at the side of the road, and soon died.

The Animal Concerns Research & Education Society was contacted, and two rescue officers arrived in about 15 minutes. The traffic police also arrived to manage the traffic in the area.

Iqbal said that he has heard of deer sightings in the area, and has seen wild boars, but this is the first time he has seen a sambar deer.

The  Agri-Food & Veterinary Authority of Singapore have advised that the public should slow down on the road when they come across wildlife, who frequent forested area.

What a waste of wildlife