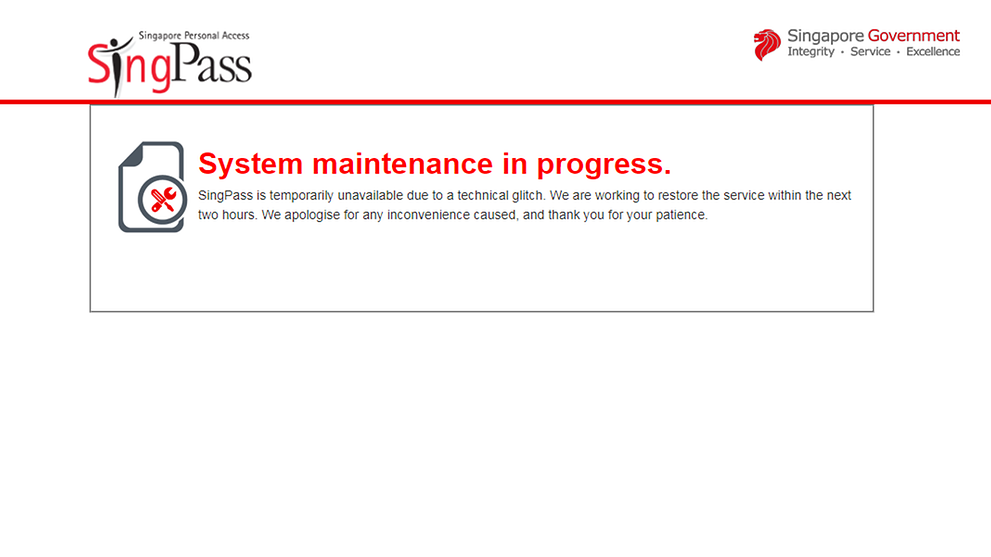 SingPass, CorpPass services back online after hours of 'intermittent access'

GovTech says the service outage is "not a cybersecurity-related issue".

Screengrab from the SingPass website, as of Thursday afternoon (Feb 8) at 3.45pm.

SINGAPORE: Online users were still unable to access SingPass and CorpPass services as of 4pm on Thursday (Feb 8), but the Government Technology Agency of Singapore (GovTech) said it is not a "cybersecurity-related issue".

Channel NewsAsia understands that both services have been unavailable since 11am.

A GovTech spokesperson said in an email: "Some users of SingPass and CorpPass may have encountered intermittent access since late morning today. We are progressively restoring the system and regret any inconvenience caused to users."

As of 4pm on Thursday, the SingPass website displayed a message that said it is undergoing a system maintenance and that it is temporarily unavailable due to a "technical glitch".

SingPass added that it was "working to restore the service within the next two hours".

The CorpPass website also displayed a similar message, citing a "technical glitch" as the reason for the service's downtime.

Some users affected by the glitch took it to social media to voice their concerns upon realising they could not access the online service.

One Twitter user, Alphonsus Lee, was concerned that the website had been hacked, while another user questioned the effectiveness of such centralised online services.

Anyone else having difficulty logging in to #singpass? Are we being hacked?

Having centralised system is convenient but when it is down can’t access to any of gov site.#SingPass #down