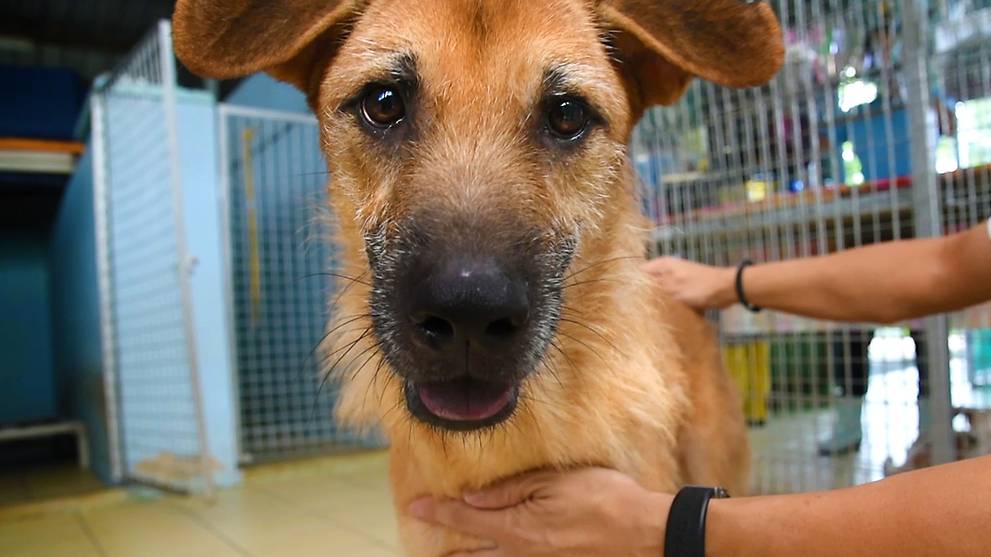 One of the many dogs at Action For Singapore Dogs (ASD) in need of a good home and love. (Photo: Gaya Chandramohan)

SINGAPORE: Dogs, as the saying goes, are man’s best friend. But come this Chinese New Year, they will also be seen as the year’s official symbol for luck, good fortune and prosperity.

Symbolism is often attached to the 12 Chinese Zodiac animals on the lunar calendar, so getting a canine friend may seem to some an auspicious way to welcome the Year of the Dog. After all, the dog represents the most steadfast of traits: Loyalty, faithfulness and honesty.

But what happens when the novelty of getting a cute new pooch wears off after the festivities are over?

Founder of Action For Singapore Dogs (ASD) Ricky Yeo wants the public to recognise the responsibilities that come with owning a pet.

“In the Year of the Dog, people are very motivated to go get a dog. It's a passing fad. Pet shops and all will be marketing that and hyping it up to the maximum extent,” said Yeo. “But you have to understand that having a dog – it is not a piece of commodity or a piece of furniture. It is a lifelong commitment and responsibility. People have to think about that carefully.”

If you really must get a dog this Chinese New Year, don't shop but adopt at places like Action for Singapore Dogs. (Photo: Gaya Chandramohan)

Executive Director of the Society for the Prevention of Cruelty to Animals (SPCA) Dr Jaipal Singh Gill is worried about the long-term welfare of these animals.

“The SPCA is concerned that there may be impulse purchases of dogs this year, and subsequent relinquishment of the pet once the novelty has worn off,” said Dr Gill. “Shortly after the last Year of the Dog, there was an increase in the number of dogs taken in and suspected abandonment cases.”

A total of 738 of those dogs were lost pets that went unclaimed – 14% more than in 2006. According to the SPCA, unclaimed lost pets are often suspected to have been abandoned by their owners.

In the weeks leading up to Feb 16, the first day of the Year of the Dog, Dr Gill is hoping that history will not repeat itself.

“There are many factors to consider before getting a pet,” he said. “For example, do you have the time and resources required to look after the animal? And do all members of the family support the decision to get the pet? If you feel you are ready for a new pet, do consider adopting one from the SPCA or other shelters. There are many animals waiting for good homes in shelters in Singapore.”

Founder of Action For Singapore Dogs (ASD) Ricky Yeo says adopting a dog is a fraction of the cost of buying one. (Photo: Gaya Chandramohan)

And for those who are not quite sure if they are indeed ready for the responsibility of having a pet, or are perhaps unable to adopt a pet of their own, volunteering at various adoption and rescue centres around Singapore might prove to be the solution to Year of the Dog impulses.

“Volunteering in an animal welfare group like Save Our Street Dogs Singapore (SOSD) results in immense satisfaction, knowing that you've made a difference in helping a homeless dog find a great family who will love it,” said an SOSD spokesperson.

“Seeing the love and bond between dog and human makes all the blood and toil to make that happen worthwhile.”

Places like Action for Singapore Dogs always welcome volunteers to walk and play with these cute pooches (Photo: Gaya Chandramohan)

ADOPTION AND RESCUE CENTRES TO VOLUNTEER AT

Save Our Street Dogs Singapore (SOSD)

Society for the Prevention of Cruelty to Animals Singapore (SPCA)

Many dog owners are stupid! why? Its very simple... NO TIME FOR YOURSELF! DUN ADOPTE A PET DOG... Just admire other pet dog will do.