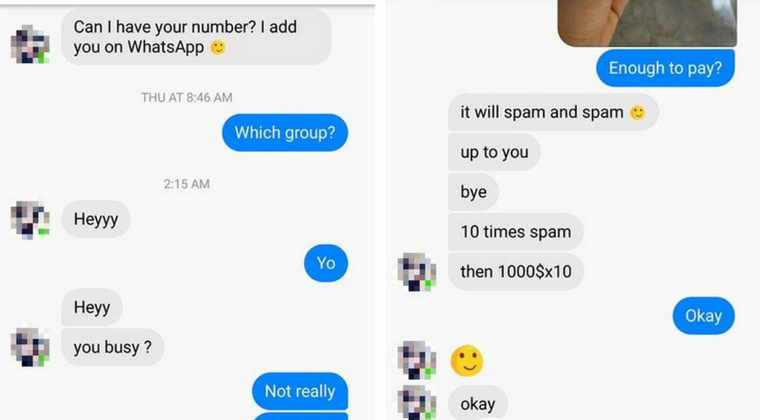 It looks like more and more people in Singapore are trying their luck to make a quick buck — regrettably at the expense of others.

Here are two examples of scams perpetrated chiefly online, and allegedly by youth, for instance:

But this latest one we’re about to introduce may be the youngest alleged scammer we’ve found in Singapore so far.

According to “Adellin”‘s Facebook profile, she appears to have attended a neighbourhood primary school in the northern part of Singapore. A 2017 photo from her page also shows her wearing the primary school’s uniform.

Asks for number to add on WhatsApp

But how can someone so young be capable of scamming others, you might ask?

Apparently, “Adellin” had approached Cayden (the person who put up the warning post in the group) through Facebook Messenger, asking for his phone number so that she could add him to a “WhatsApp group chat”:

In the following screenshot, she is seen asking for a “3-digit code”, that according to her, will give him access to this so-called WhatsApp group:

Now, this is certainly reminiscent of the now-rampant  scam, where a Facebook account — usually a cloned version of one of your unfortunate friends — will add you as a friend, then ask for a one-time password or verification number that will then be used for fraudulent purchases.

In this case, Adellin had used , an e-payment website allowing a user to pay for online games via carrier billing or bank transfers.

All things considered, “Adellin” may not even be who she claims to be, since as mentioned above, these scams often are conducted by people who set up accounts with stolen identities.

Cayden posted screenshots of SMSes he received from Codapay with the 3-digit code “Adellin” was asking him for. These, thankfully, came with a reminder, in helpful capital letters, that “anyone asking for this code is a scammer”:

Note that despite the SMS stating clearly that the 3-digit number will be used to pay S$59.92 to someone named Cherry, Adellin told him that it was only a “spam message” and he does not have to pay for anything:

Even when Cayden revealed to her that he had long ago figured out the game she was playing, it still didn’t seem to stop Adellin from trying.

She then pulled out her final card by sending this very questionable image — and with extremely questionable English, we might add:

In case you can’t see the picture, here’s what it says:

“We just sent an SMS to [Cayden’s phone number]

That said, it’s tough to tell whether Adellin’s account was indeed taken over by a hacker or not, considering how childish her messages sound:

After a while, Adellin probably realised that Cayden cannot be fooled and according to Cayden, blocked him on Facebook altogether. He wrote:

“I didn’t give her the code, trolled her (and then) she blocked me.”

For more information on how to protect yourself and your loved ones from falling for such scams, you may check out the National Crime Prevention Council’s website .

All photos and top image via Cgz Cayden