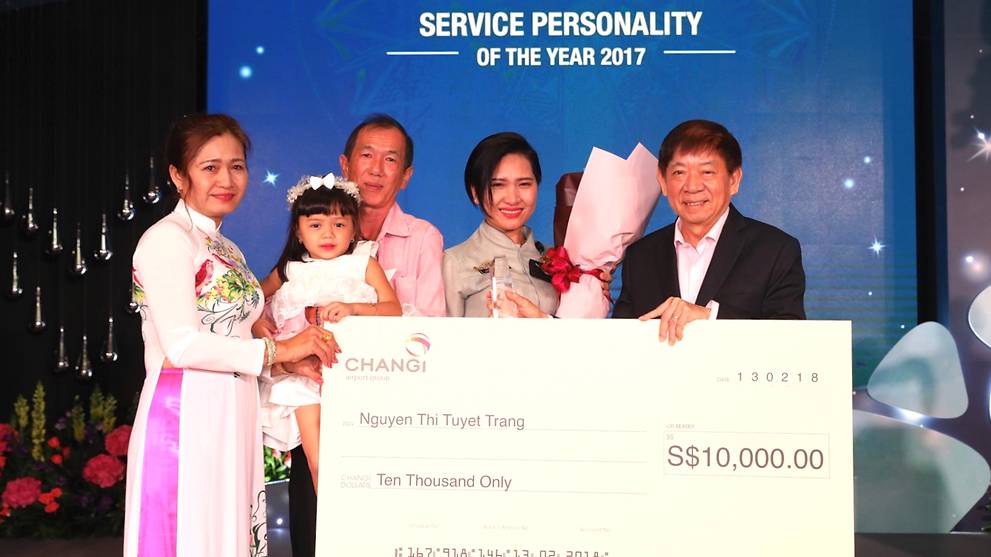 Nguyen Thi Tuyet Trang was surprised with a bouquet of flowers from her family after receiving her award from Mr Khaw. (Photo: Changi Airport)

The 26-year-old was one of 30 airport employees honoured at Changi Airport's Annual Airport Celebration.

In the first incident that took place in December 2016 outside a toilet in Terminal 3, Ms Nguyen helped a five-year-old girl who was choking on a piece of candy.

She was alerted when she heard the child's mother screaming frantically while carrying her child. Ms Trang stepped forward and managed to dislodge the candy the child was choking on, Changi Airport Group (CAG) said in a media release.

Six months later, in June 2017, Ms Nguyen performed cardiopulmonary resuscitation (CPR) on a middle-aged female passenger lying on the ground in the transit hall in Terminal 2.

The passenger, who had suffered an epilepsy attack, subsequently regained consciousness, CAG said.

Veteran airport employee Fauziah Mohd Ali was also presented with the Changi Service Star for winning five top service awards in her 18 years of service at the airport.

"From providing assistance to passengers who were ill and could not proceed with their travels to those who faced problems with their flight connections, nothing seemed too difficult to handle for Fauzia," CAG said in its statement.

Other awards that were given out during the event include the Service Partner of the Year award that was given to Smarte Carte Singapore Pte Ltd for improving the efficiency and safety of airport operations by implementing an automated trolley transportation system.

This is the 25th year Changi Airport is honouring individuals who have gone beyond the call of duty to assist passengers, showed initiative and exhibited resourcefulness.

Coordinating Minister for Infrastructure and Minister for Transport Khaw Boon Wan, who was also at the event to give out the awards, thanked the Changi Airport staff for "serving tirelessly".

"We thank them for serving tirelessly every day and night, including on public holidays like the upcoming #LunarNewYear to keep our airport humming," said Mr Khaw in a Facebook post on Tuesday evening.

“I want to congratulate all the award winners of the evening. Thank you, for your dedication and courage. I hope your stories will inspire many to do the same for our passengers, and I look forward to having more meaningful engagements with all of you as we continue to build our ONE Changi community," said Mr Lee.