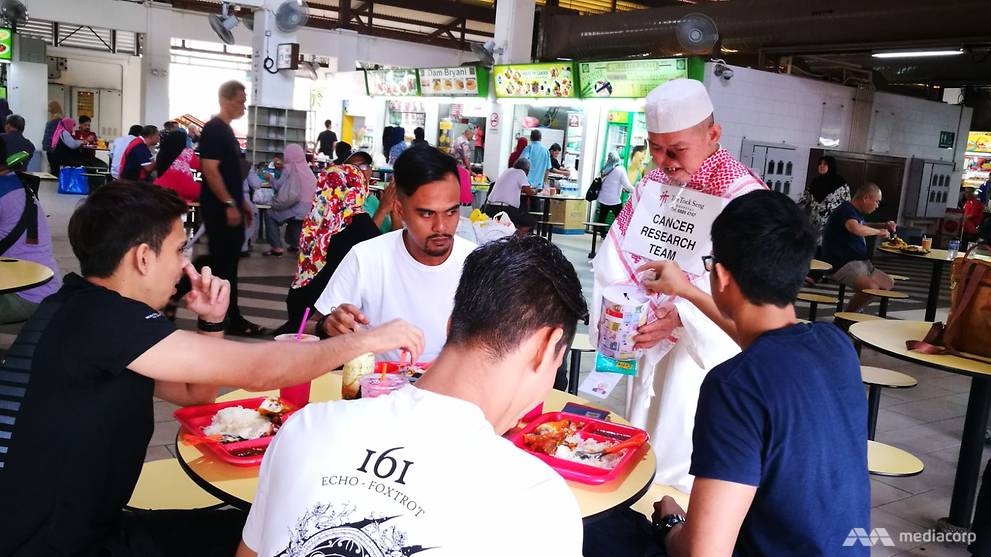 SINGAPORE: Days after Tan Tock Seng Hospital (TTSH) issued a warning on a scam where people have been asked to donate to a "TTSH cancer research fund", a man was spotted at Geylang Serai market soliciting donations for the cause.The man, who identified himself as Zeng Guoyuan, was seen approaching diners for donations at the hawker centre at the market at about 10am on Thursday (Feb 15). He wore signs on his front and back that said "Tan Tock Seng Hospital cancer research team".

People were seen placing coins and notes in a donation tin he was carrying.

When asked for identification, the man, who did not have a nose, produced a photocopy of a medical report for Zeng Guoyuan @ Chan Hock Seng.

TTSH posted a warning about the scam on Facebook on Monday. "We advise you not to engage such individuals if you encounter them in public and inform the police," it said.

Channel NewsAsia understands the hospital has filed a police report over the matter and that authorities are investigating.

Mr Zeng, a former businessman who lost his nose to cancer, is better known by his nickname "Parrot Man". He has previously turned up at various election events with a parrot, trying to run as an independent candidate.

Former businessman and former election hopeful Zeng Guoyuan spotted with his parrot at the Sungei Road market before its closure. (Photo: Gaya Chandramohan)

In recent years, he was seen selling tissue at the Kwan Im Thong Hood Cho temple at Waterloo Street.Last August, Mr Zeng was reported to have been in a spat with the management of Ngee Ann City after he repeatedly turned up in a wheelchair near the mall, trying to sell tissue paper. The mall management put up signs urging members of the public to not donate money to him, and stating that he is capable of walking and riding a bike.