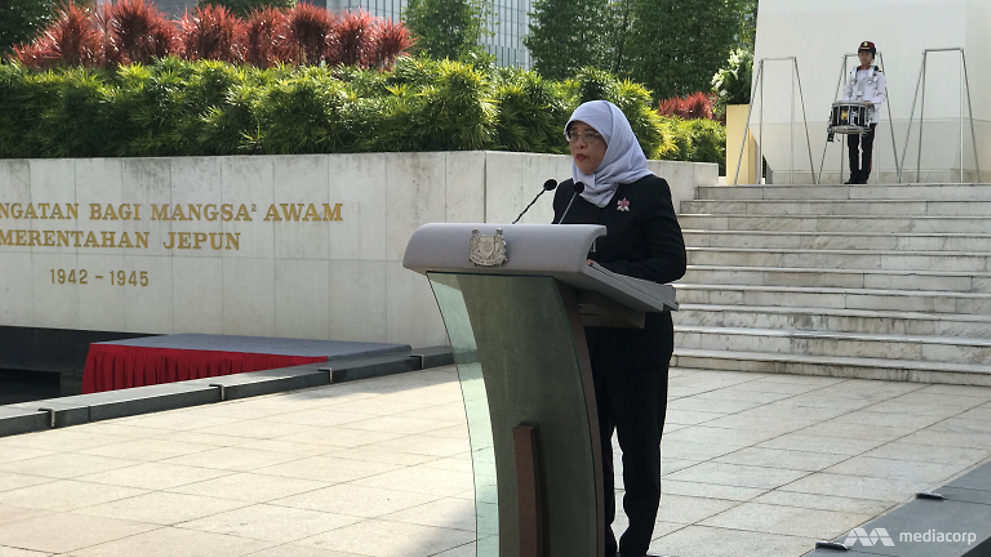 President Halimah Yacob delivers her speech at at the War Memorial Park, where she was attending the 51st War Memorial Service on Thursday (Feb 15). (Photo: Elizabeth Neo)

SINGAPORE: The road ahead will have its fair share of challenges, and generations ahead will have to find their own ways forward while treasuring the importance of multiculturalism and total defence.

President Halimah Yacob said this on Thursday (Feb 15) at the War Memorial Park, where she was attending the 51st War Memorial Service held in commemoration of the civilian victims of the Japanese Occupation and the Total Defence Day Commemoration event.

The event was organised by the Singapore Chinese Chamber of Commerce and Industry (SCCCI) and Nexus, the Defence Ministry’s national education arm.

It is the first time the president is officiating at the war memorial service and total defence day commemoration event. Education Minister (Higher Education and Skills) and Second Minister for Defence Ong Ye Kung was also at the event.

In her speech, President Halimah noted how in the current security environment, Singapore can no longer just rely on security agencies to defend against threats.

“Everyone - at work, in school or at home - has a part to play. It may be as simple as keeping a lookout for one another or helping someone in need," she said.

Madam Halimah also noted how Total Defence has helped Singapore ride through past challenges such as the Al Qaeda terror threat in 2001, the SARS outbreak in 2003 and the global financial crisis.

“It continues to be our best response to potential threats such as self-radicalisation or cyberattacks.”

Madam Halimah was addressing some 800 representatives from SCCCI, the Defence Ministry, ACCORD, diplomatic corps, religious organisations, National Youth Council, business and clan associations, uniformed groups, schools and veteran leagues. Also in the crowd were the families of the victims.

An "All Clear" siren was sounded by the Singapore Civil Defence Force during the service, after which a minute of silence was observed.

President of the SCCCI Roland Ng said the move to organise the war memorial service in conjunction with the Total Defence Day Commemoration event comes at an opportune time as “it shows the resolve of Singapore as a young nation, to never forget, stay united and rise above one of the darkest times of our history to build a better future together.

“For the business community, we appreciate the peace we now enjoy and the importance of safeguarding our country,” he added