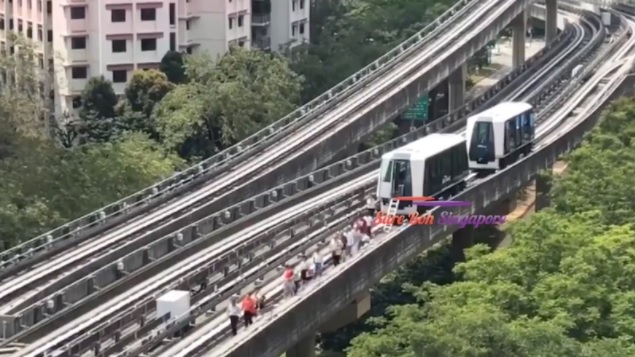 Friday morning saw an inauspicious start to Chinese New Year for Sengkang commuters, as the Light Rail Transit (LRT) services along the Sengkang West loop were disrupted by a “power fault”. According to SBS Transit, the Light Rail Vehicle (LRV) ended stalling before it approached Sengkang Town Centre station around 11:10am.

Naturally, videos capturing the stationary vehicle and its stranded passengers alighting and walking along the track towards the station soon surfaced on social media. Our condolences to these folks who were forced to walk quite a distance in the blistering heat while wearing their best festive outfits.

Eyewitnesses reported hearing a “loud boom” before the vehicle stopped moving, Channel NewsAsia noted. TODAY added that smoke was seen at the back of the train.

SBS Transit’s senior vice-president for corporate communications Tammy Tan explained that the noise was due to a “dislodged power collector shoe on the LRV”, which caused it to “stall immediately as a safety feature”.

She added that SBS Transit staff took charge of the situation quickly and helped the 15 commuters on board to “detrain safely” and move towards the station.

At 1pm, service was back on, after another LRV was used to push the defective one out of the line.