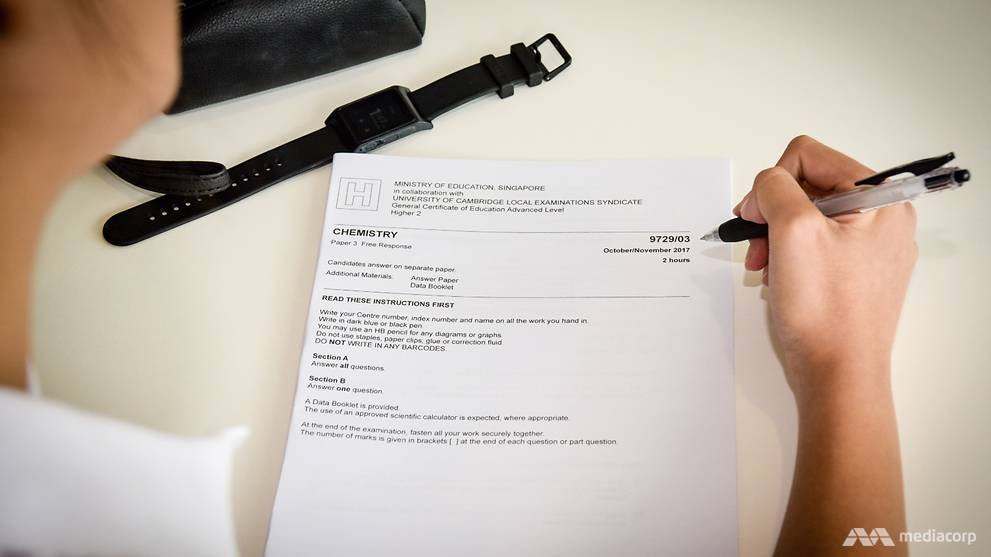 SINGAPORE: A total of 238 students from four junior colleges who sat for their GCE A-Level examinations last year had part of their H2 Chemistry answer scripts stolen in the United Kingdom, before the papers were delivered to the examiners.

The affected students, who received their results on Friday, have had their final grades adjusted, the Singapore Examinations and Assessment Board (SEAB) revealed on Friday (Feb 23).

The stolen scripts were for Paper 3, which consists of free-response questions and carries a weightage of 35 per cent of the entire H2 Chemistry examination.

HOW THE PAPERS WERE STOLEN

The theft occurred on Nov 16 in the UK while the exam answer scripts were in transit from Cambridge Assessment’s office to the examiner for marking. A parcel containing the scripts – 60 each from Anglo-Chinese JC, Hwa Chong Institution and Nanyang JC, and 58 from Anderson JC – was stolen from a locked courier company van, along with seven other unrelated parcels.

The courier reported the theft to the UK police on the same day. To date, the case remains under UK police investigation and the scripts have not been recovered.

The affected candidates were informed of the theft on Friday, when they received their results, and SEAB said it had carefully considered the implications of the timing.

The initial indication, it explained, was that the stolen scripts might be recovered. If so, the scripts could still be marked. However, the UK police had not managed to arrest the culprits or locate the stolen packages by the end of January, when the marking of all Chemistry papers for the whole cohort was completed.

SEAB said that informing the students without being able to give them their awarded grades would be alarming and cause “undue anxiety”, and grade projections for the affected students could only be done after the marking of all Chemistry papers was completed. On the other hand, informing them of just their awarded Chemistry grades would not be meaningful, as they would not know their grades for their other subjects, according to the SEAB.

This is the first time that answer scripts from a national examination have been stolen. Chief executive of SEAB Tan Lay Choo said that the last time a similar incident occurred was in 1993, when 261 Literature scripts from the GCE O-Level exam were lost.

But she added that there is a “major difference” in how the grades for affected students have been projected for the two cases.

“For the Literature exam, there was only one paper, and the script missing was 100 per cent of the outcome of the results,” she said. “In this case, we have 65 per cent of their results, and the methods used will be very different.”

“This time, we could actually use their real performance to project the 35 per cent, which is a smaller percentage than what is missing. The other time, we didn’t have any of their examination results, and therefore, the projections were based on their school-based prelim results.”

She added that she is “very confident” of the method that is used to project the affected students’ grades. “It’s a tried and tested method, it’s an established methodology, and has statistical soundness,” she said. “It’s not a new method we have invented for this case. We have used it for candidates who may have missed some papers for very good reasons in the past, so we are confident that this method is something that worked.”

To award the grades for these affected candidates, both Cambridge Assessment and SEAB considered their performance in the other three chemistry papers, and the performance of all the other candidates in the subject.

Following this, all 238 candidates got at least a pass grade for the subject. At least 81 per cent of them scored an A or B grade, SEAB added. The results are comparable to the performance of their peers in the four schools, and all candidates attained better grades or maintained their grades in the national exams compared to their school-based exams.

However, given the unique circumstances, Cambridge Assessment and SEAB have made arrangements to offer the affected students an opportunity to re-sit the H2 Chemistry Paper 3, if they wish. They will have a choice of taking the paper on Apr 25, or in November 2018.

The re-examination will be based on the same curriculum that the candidates had been taught, and of the same standard and format as the 2017 A-Level H2 Chemistry Paper 3 exam.

SEAB said that it will also work with the local autonomous universities to consider the re-examination results for those students who take up that option, for the purpose of shortlisting for interviews, as well as final course admissions or scholarship applications. It added that it has taken the necessary actions to ensure that the affected candidates are not disadvantaged and are given a “valid and fair assessment”.

SEAB also noted that it understands that Cambridge Assessment is reviewing their processes to ensure the security of examination papers and scripts, and “safeguard the integrity of our national examinations”.

In a media statement, Cambridge Assessment offered its sincere apologies to the affected candidates, their families and their schools. “The security of examination papers is of the utmost importance to us,” said Roderic Gillespie, Cambridge International’s director of assessment. “Cambridge Assessment will continue to review the situation with the police and the courier company.”