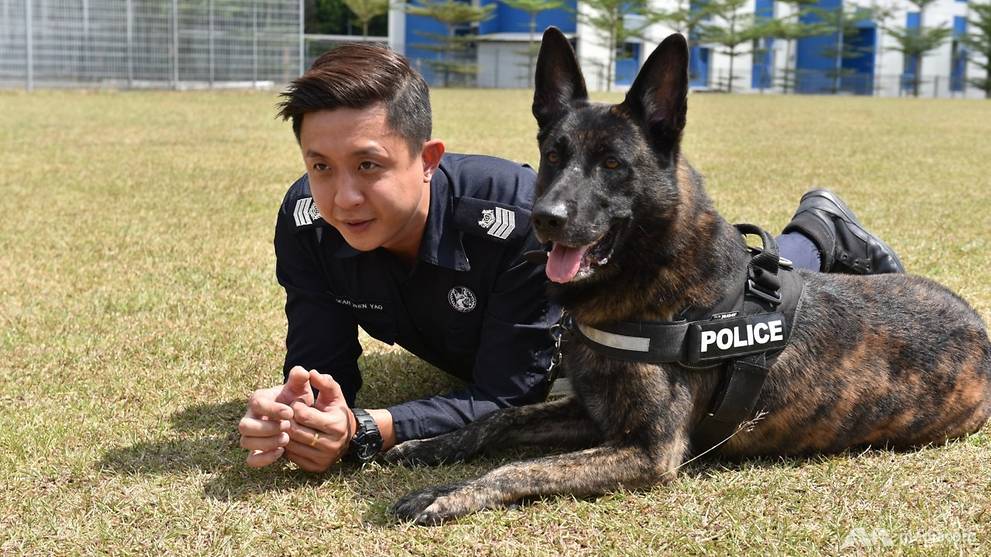 Man's best friend - and colleague: The service dogs of the Police K-9 Unit

SINGAPORE: While many were visiting family or enjoying a break from work during the Chinese New Year weekend, a group of Singapore Police Force (SPF) officers and their canine colleagues from the Police K-9 Unit were hard at work, patrolling public spaces to keep Singapore safe.

One of them was 29-year-old Staff Sergeant Seah Zhen Yao and his three-year-old police patrol dog, Dux. They were on the night shift on the second day of Chinese New Year. Till 6am on Sunday (Feb 18), the duo patrolled crowded public areas such as Geylang, Little India and the former St James Power Station. Their task: To keep public order, especially at the nightclub hotspots where scuffles are common.

When we visited Staff Sgt Seah and Dux at the Police K-9 Unit Headquarters along Mowbray Road this week, the three-year-old Dutch Shepherd looked every bit as fierce, muscular and alert as we thought he would be.

He cut a commanding figure with his pert ears and police dog harness.

Staff Sgt Seah was first assigned to Dux when the dog was 16 months old. “When I started handling Dux, he was a ‘green tag’ dog – meaning he was not trained in anything,” said Staff Sgt Seah, who has been in the service for nine years.

“He was a mischievous boy. He was trying to bite everything and everyone. But subsequently, after he was handed to me, we started to bond. Sometimes, he still shows a little aggressiveness to others, but not me.”

Staff Sgt Seah recalled the first major tracking job that the duo took on last July, which was to find an elderly man who had gone missing for four days while picking durians in a forested area near Kranji Expressway.

“We started with two dog teams; it was a very hot morning,” said Seah. “When we reached the place, we realised that it was a very, very large forested area. We didn’t have any specific area to search, so we just trusted our dogs and see what they could pick up.”

Although Dux was trained to pick up any scent or trail of human tracks, it was challenging as the trace would have faded after four days. “He was quite active at first. But after the long search, I could see him asking: Where is my ball (reward)? Why do I keep searching, but there is no reward?” said Staff Sgt Seah with a chuckle.

The elderly man was eventually found by police officers at the western end of the forested area, injured, but conscious.

Dux getting a reward after the afternoon’s activities. (Photo: Christy Yip)

“Dux is very playful. There is a saying: Working with animals can be better than working with human beings.

"Sometimes during deployment, I will feel lonely, but then I have someone to talk to. At other times, he will bring me joy. When you have a really bad day, you can laugh at his silly (antics). He will cheer you up a little!”

THE MOST DOGGED UNIT IN THE SPF

Dogs have been used in the Singapore Police Force since 1911, when an Airedale Terrier was used to track down prison escapees. The Police K-9 Unit now spans more than 250 service dogs.

Majority of the police service dogs are (from left) Springer Spaniels, Labradors and the German and Belgium Shepherds. (Photo: Dawn Ang)

“These dogs are pre-selected by our dog trainers, who go overseas to select them before they are sent to Singapore,” said Senior Staff Sergeant Ong Zhi Yao, a para-vet with the K-9 Unit. The dogs are mainly brought in from the United Kingdom, Holland, Belgium and China. When they are around 16 months to two years of age, the dogs are assigned to an experienced police dog handler to start their service training.

Dogs bigger in build such as German and Belgium Shepherds are trained as patrol or security dogs and have various capabilities, such as searching buildings or tracking.

The Spaniels and Labradors are often trained as explosive or narcotics detection dogs, as they are smaller in size and more nimble. “Most of the dogs have just one vocation while in service,” said Senior Staff Sgt Ong. “We don’t want to mix up the guard dogs and the narcotics or explosive (detection) dogs, as they have different commands and actions.”

The service dogs work till the age of seven before they retire and are put up for adoption.

While Dux has several more years till he is due for retirement, the SPF currently has several dogs that are looking for a new home.

Will these police dogs remain aggressive and fierce while in retirement? “I would say not really. They are trained only to act (aggressive) upon command,” said Ong. “I have been working with the K-9 Unit for seven years and I feel that the bigger working dogs are easier to train and more fun.”

Last year, dog handlers from the SPF and Singapore Civil Defence Force's K-9 units and the Singapore Armed Forces' Military Working Dog Unit who live in public housing were allowed for the first time to adopt their retired canine friends under an expansion of Project ADORE.

To date, 11 of the 15 SPF officers who previously expressed interest in adopting retired dogs have done so. The other four officers are waiting for their service dogs to retire, said the SPF. It added that have been no complaints from neighbours of police dogs adopted.

For those interested in giving a retired service dog a new home in this Year of Dog, you can reach out to the Police K-9 Unit, which has an adoption drive all through the year.