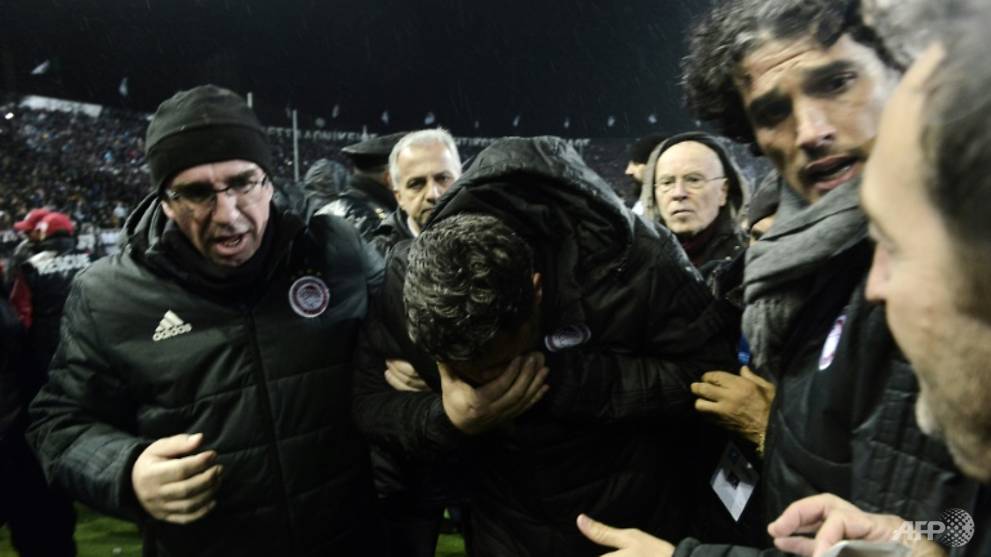 Roll and out: Olympiakos' Spanish coach Oscar Garcia reacts after being hit in the face by a toilet roll. (Photo: AFP/Sakis Mitrolidis)

THESSALONIKI: Olympiakos coach Oscar Garcia will spend the night at a heavily-guarded Thessaloniki hospital following the postponement of the derby between PAOK and Olympiakos on Sunday (Feb 25).

Garcia was struck in the face by a toilet roll thrown by a spectator minutes before kick-off.

Police are guarding Garcia's room and the hospital has not issued a statement on his condition.

Garcia, a Spanish national, left the stadium in an ambulance with a bloodied lip and complaining of dizziness.

Referee Alexandros Aretopoulos left the stadium without making a comment and will issue his report on the cancellation of the match to the Greek football federation.

It is expected that PAOK will be punished with a 3-0 awarding of the match to Olympiakos, the docking of three points, a heavy fine and probably two or three home matches without spectators.

The incident prompted the Olympiakos team to leave the pitch in protest before riots erupted outside the ground.

However, PAOK communications director Kyriakos Kyriakos said: "It was obvious that Olympiakos came here with that goal (to suspend the match). They have been provoking for 30 years now. They came to scream and to provoke."

Angry PAOK fans leaving the stadium then clashed with police who used tear gas to quell the violence.

Police made one arrest as fans set fire to trash bins and damaged parked cars.

PAOK are the league leaders and have a nine-point advantage over third-place Olympiakos who have won the last seven straight league titles.