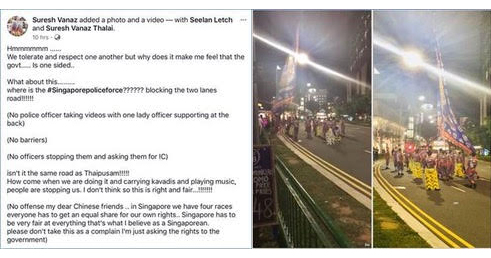 The Singapore Police Force has issued a to dispel allegations that it applies double standards in regulating lion dance performances and Thaipusam.

This was after a now-deleted Facebook (seen above) on Feb. 25 questioned why the police did not intervene when a lion dance troupe was seen on the road at Prinsep Street.

We tolerate and respect one another but why does it make me feel that the govt…… Is one sided.

where is the #Singaporepoliceforce? blocking the two lanes road!!!!!!!

The post was accompanied by a video of the incident where members of the troupe were seen on the road.

The post made a comparison between the behaviour of the lion dance troupe and the devotees who were part of the Thaipusam procession on Jan. 31, 2018, where participants were carrying out their activities in public.

Contrary to the allegation that the police were not involved, the Singapore Police Force said they arrived at the scene at 10.54pm after a complaint was made about the flag performance by the lion dance troupe.

The troupe then complied with police orders and stopped the performance.

Cultural events different from religious ones

The police also explained in the statement that cultural performances are different from religious events.

This explains why lion and dragon dance performances are regulated as cultural performances, which are different from Thaipusam, which is a religious event.

This clarification comes after the police were accused of being too heavy-handed in regulating Thaipusam in 2018.

This is the police statement in full:

Police are aware of an online post containing a video about a flag performance by a lion and dragon dance troupe which took place at Prinsep Street on the night of 24 Feb 2018.

Police had received a complaint about the performance at 10.33pm. Contrary to the allegation in the post, Police officers had responded to the call and arrived on the ground at 10.54pm. They warned the troupe to stop the performance as it was not in compliance with the conditions under which they were allowed to perform. The troupe complied.

Chinese lion and dragon dance performances are cultural performances, as opposed to religious events which are more sensitive from a law and order perspective. They are allowed under the Public Entertainments Act so long as they comply with certain conditions, including the playing of drums and cymbals, similar to kompangs being allowed at Malay cultural events and also the nathaswaram, thavil and melas at Indian cultural events. 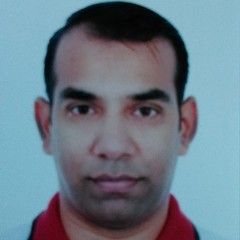