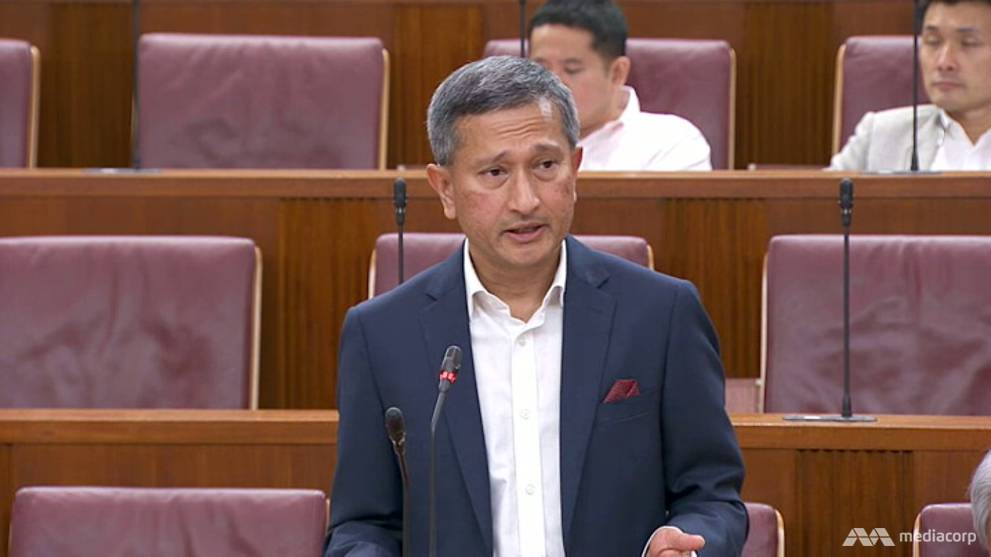 Singaporeans must be well-informed about the multitude and diversity of views, and at the same time, be discerning towards "fake news", says the Minister for Foreign Affairs.

Speaking at his ministry’s Committee of Supply debate, Dr Balakrishnan told Parliament that international issues will increasingly be dragged into the domestic discourse, and Singaporeans need to be well-informed of what's happening around the world.

"Singaporeans must be well-informed about not only the multitude of viewpoints, but also the corresponding trade-offs we have to weigh up," he said.

"Singaporeans also have to be discerning towards ‘fake news’ and not allow ourselves to be distracted and divided."

To this end, he said the Ministry of Foreign Affairs (MFA) has been stepping up its outreach to Singaporeans at various levels. “We do need strong and informed support from the public, because foreign policy begins at home,” said Dr Balakrishnan.

Taking a quote from former President Tony Tan at last year’s S Rajaratnam Lecture, Dr Balakrishnan noted that “when someone comes to you with a message, reflect upon the message and ask yourself what it really means”.

“Think carefully about who stands to benefit from the proposed message, and whether it is in Singapore’s own national interest,” he said.

Most of all, he added, Singapore’s foreign policy rests on a “domestic consensus on national interests”.

“I will continue to work with all members to reach out to Singaporeans, to build a deeper appreciation of the fundamental truths - the hard truths - that underpin our foreign policy, and to develop a shared national instinct against external attempts to pressure, influence, or divide us,” he said.

In pointing out some of Singapore’s future challenges, Dr Balakrishnan noted that while Singapore’s diplomatic relations are in good order, there is a need to stay alert to “known unknowns, and unknown unknowns”, or “wild cards”.

“What are these known unknowns? Tensions on the Korean Peninsula present a major challenge to regional peace and stability,” he said.

"Singapore has been implementing the United Nations Security Council Resolutions fully and faithfully. We hope that the recent talks between the Republic of Korea and the Democratic People's Republic of Korea will help arrive at a peaceful resolution and ultimately we hope there will be a denuclearisation of the Korean Peninsula.

“How we in Singapore weather external shocks actually boils down to our domestic resilience and unity,” he said.

Dr Balakrishnan also touched on Singapore’s role as ASEAN chair. He noted that Singapore will be called upon to proactively manage ASEAN’s response to difficult issues.

He pointed to questions from MPs Louis Ng and Christopher de Souza on what more Singapore or ASEAN can do to alleviate the humanitarian situation in Rakhine State. A Myanmar military crackdown on rebels that began last August sparked an exodus of Rohingya Muslims to neighbouring Bangladesh. Villages have been razed to the ground in Rakhine amid the crackdown.

ASEAN operates on the principles of consensus and non-interference in the domestic affairs of member states, Dr Balakrishnan noted.

“We can’t directly intervene but I would say this is a humanitarian disaster of the highest order. If not resolved properly, we will end up creating yet another flash point, sanctuary for extremists and terrorists, and it will become another trans-boundary threat,” he said.

"We have to try to make a positive difference in our own, quiet, behind-the-scenes way."

In response to the situation in Rakhine, ASEAN agreed to mobilise the ASEAN Coordinating Centre for Humanitarian Assistance on Disaster Management (AHA Centre), to deliver assistance to affected communities in Myanmar without discrimination, he said, adding that to date, AHA Centre has delivered two loads of relief supplies worth about US$500,000 to the Myanmar government.

ASEAN foreign ministers have also urged Myanmar to continue implementing the recommendations made by the Advisory Commission on Rakhine State, which was led by former UN Secretary-General Kofi Annan.

“We also encouraged the expeditious commencement of the voluntary return of displaced persons, but it has to be done in a safe, secure and dignified way without undue delay,” said Dr Balakrishnan.

Nevertheless, the responsibility to resolve the complex inter-communal issues ultimately rests with all the stakeholders in Myanmar, and Singapore and ASEAN will continue to do their part by encouraging all parties to work towards a long-term and comprehensive solution, and create a conducive environment for affected communities to rebuild their lives, he added.

Saying he is “heartened” that many members of the House emphasised the importance of ASEAN, Dr Balakrishnan said he took MP Sylvia Lim’s point that there is a “need to fly the ASEAN flag more”.

“We have taken it for granted that there is no war in Southeast Asia,” he said, adding that when there are disputes, member states go to the international courts.

Dr Balakrishnan also reiterated that ASEAN has always been a cornerstone for peace and prosperity in the region.

When there is the “right spirit of cooperation”, the countries can embark on win-win initiatives, Dr Balakrishnan said.

This has strengthened bilateral ties and allowed Singapore companies to tap on the dynamic Malaysian and Indonesian economies, he added.

“Our relations will always be complex, and issues will surface from time to time. When they do, we should have a sense of perspective, and not let a single issue derail the overall relationship,” he said.

He elaborated on Singapore's bilateral relations with the two countries. With Malaysia, Singapore continues to set new milestones, he said, pointing to the opening of the Marina One and DUO joint venture developments, which have a combined Gross Development Value of S$11 billion. There was also the signing of the Johor Bahru-Singapore Rapid Transit System (RTS) Link Bilateral Agreement.

Responding to a question about the Pedra Branca cases at the International Court of Justice and the impact on bilateral ties, Dr Balakrishnan said: “Let me put this very simply - we will not let this issue define or derail our relationship."

He also drew reference to Malaysia’s upcoming General Election, and noted that Singapore had been used as political fodder in the heat of election fever in the past.

“We will not be drawn into the domestic politics of our neighbours, and neither will we allow the import of foreign countries’ politics into Singapore,” he said.

Singapore is also working with Indonesia on a digital industry cluster in Batam and tech start-up ecosystems in Jakarta, and the two countries continue to work closely to strengthen counterterrorism efforts. They are also working together to tackle and manage the haze situation.

The relations and cooperation between Singapore and China are "deep, longstanding and substantive", he said, while acknowledging that as two sovereign states with “very different” national circumstances, issues will arise occasionally.

"We must expect some differences in perspectives, and we must not get flustered even when pressured. This is to be expected in international relations because you cannot expect two countries’ interests to be completely identical.

"We've had some bumps along the way but these episodes over the last two-and-a-half years have helped both sides understand each other’s position better. I think it has made for a more mature relationship," said Singapore's Foreign Minister.

As for relations with the US, Dr Balakrishnan said it remains a strategic partner with longstanding, strategic and mutually-beneficial relations, with defence ties forming  the backbone of the bilateral relationship.