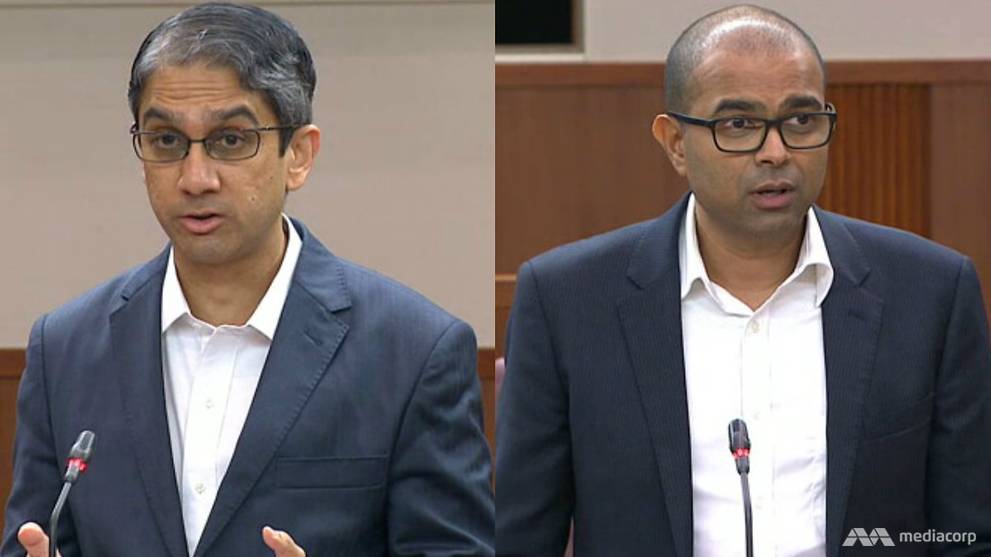 The Senior Minister of State for Education was responding to comments during the Committee of Supply debate by NCMP Leon Perera, who had asked for MOE to consider allowing MPs and NMPs into schools to share their perspectives on public affairs.

Leon Perera and Janil Puthucheary in Parliament on Mar 5.

SINGAPORE: Bringing partisan, political debates by elected Members of Parliament (MPs) into schools represents a “fundamental shift”, and is “not what we do currently”, Senior Minister of State for Education Janil Puthucheary said in Parliament on Monday (Mar 5).

Responding to Non-Constituency MP Leon Perera, Dr Puthucheary stressed that it would be inappropriate for an invitation to be extended to Mr Perera in his capacity as a member of a political party and an MP.

During the Ministry of Education's (MOE) Committee of Supply debate, Mr Perera had said that students should be able to hear, first-hand and in their schools, the perspectives of duly-elected MPs not from the People’s Action Party (PAP) on the issues of the day.

He explained that while he is not 100 per cent sure, it would seem that Government office-holders and grassroots advisors can go into MOE schools and officiate events, hold dialogues on national issues and interact with students, while MPs in their MP capacity cannot.

“Surely it cannot be argued that ministers and grassroots advisors are, by definition, non-political when they talk to students, but non-PAP MPs are, by definition, political,” he said, adding that the same strictures on speech and behaviour can be applied to both groups when they go into schools. “I believe that both groups should be allowed into schools, but not to canvass for a party, not to engage in partisan discussion, not to wear party symbols and so on.”

Mr Perera, who is from the Workers’ Party, had asked MOE to consider allowing all MPs, including NMPs, into schools to share their perspectives on public affairs and their role in the legislative process as MPs. He had also asked MOE to clarify when the “apparently long-standing policy” to allow MPs into schools changed, and why it was changed at that time. He noted that on at least two schools’ websites, MPs would be acknowledged prior to 2011 or thereabouts, but after that, schools only referred to grassroots advisors.

“We can pin labels that say PAP is by definition okay, non-PAP is by definition partisan and hence not. But does that serve the best interests of our students, who will become the citizens of tomorrow?” he asked. “Let us not make this a conversation about labels - that is a circular argument. Let’s make this a conversation about what’s best for our students.”

Mr Perera had previously tabled a parliamentary questionon the topic in February. Dr Puthucheary, who had answered then, noted that schools should be free of partisan politics, and they do not invite MPs or political parties to speak at school events.

A LEVEL OF HUBRIS THAT IS “REALLY QUITE REMARKABLE”

Responding to Mr Perera’s question in his speech, Dr Puthucheary stressed that what Mr Perera was asking for is “inappropriate”.

He noted that Mr Perera had taken a “particular view about labels, and perhaps (his) labelling of his comments as partisan politics”, and explained that he had “provided those words not as a label, but as an explanation of what (he) is asking for”.

“He himself has acknowledged that he has attended schools in a non-partisan, non-political capacity,” said Dr Puthucheary. “There is no obstruction to him doing so.

“What he is asking for, is for him to be allowed to attend in a partisan, political capacity. There is a difference.”

“This is a level of hubris that is really quite remarkable. If he can attend in a non-partisan, non-political way, I think the assumption should be in good faith that other people can do as well.”

In a response to further clarifications from Mr Perera, Dr Puthucheary later asked Mr Perera to clarify if he had attended a school and interacted with students, and if so, in what capacity.

Mr Perera explained that he had attended one school event in his private sector capacity. “In that capacity, I only spoke about one aspect of my private sector work, and did not touch on anything to do with my role as an MP or perspectives on current affairs, public matters and so on,” he said.

To that, Dr Puthucheary stressed that anybody can attend a school, but “it’s got to be a question of what capacity you attend in, and that drives your behaviour in the school”.

“All kinds of people can have political views,” he said. “People who drive buses, people who prepare our food, our teachers, but you have to be very clear about the role in which one attends and interacts with students.”

He also clarified that MOE’s policy on the issue has always been the same, and there has been no change.