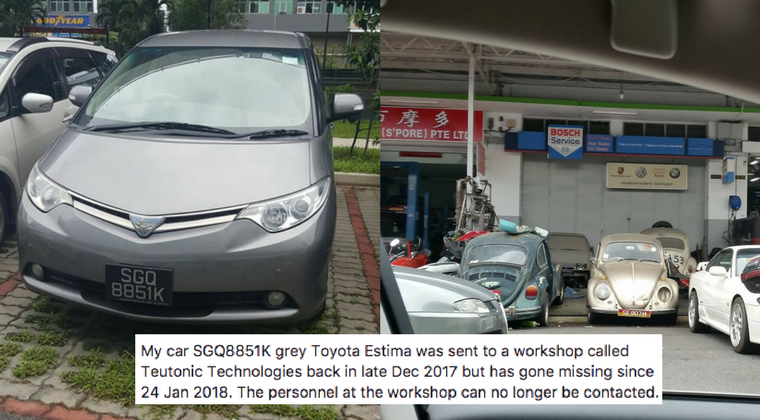 Having your vehicle serviced can cause a small hole in your pocket, but at least it will all be worth it when you get back a car that is (almost) as good as new.

But this isn’t the case for Allan Wan, whose car has gone missing since he sent his car for maintenance works in December last year.

According to a police report filed by Wan, he decided to have his grey Toyota Estima serviced by Teutonic Technologies when the vehicle was experiencing water leakage and violent engine vibrations.

As this was the fourth time he has engaged the workshop located in Sin Ming Ave, it was normal for him to have his car collected and like his previous transactions with the Teutonic Technologies, he thought that it would immediately be sent to the workshop.

In the following month, Wan would contact Ken regularly for updates only for Ken to give excuses such as having to wait for various parts to be ordered before getting his car repaired.

On Jan. 24, Wan allegedly received an invoice from the workshop for a whopping S$4,500.

Now, this came as a shock to Wan as according to him, the car’s engine is under Teutonic Technologies’ one-year warranty.

Serviced by another workshop

When Wan told Ken that he refused to pay to service his engine, he was then informed that his car was actually sent to another workshop – a detail that was not told or approved by Wan – and that workshop will not release his car if payment is not made.

When Wan inquired about the second workshop, he said that Ken gave little to no details to him.

However after Wan demanded the location of his car on Feb. 6, Ken finally relented and told him that his car was apparently at a workshop called H&H Auto Rebuilt in Kaki Bukit.

He talked to a worker of the second workshop and found out that his car was sent for repairs, but was subsequently collected by Ken on Jan. 24.

Workshop apparently out of service

That same day, Wan went over to Teutonic Technologies but found that it was closed and said that it looked as if it was out of operation as there were “a couple of cars parked there with much dust on them”.

Through, a quick check on the Accounting and Corporate Regulatory Authority (ACRA) shows that the business is still live.

Ken and the workshop’s owner Alvin Ng, however, has since remained uncontactable.

Vehicle detected at ERP gantry due to insufficient balance

It also seems like the car was still in Singapore as of Feb. 1 since Wan received a fine from the Land Transport Authority (LTA).

The letter was sent to remind him to pay for an outstanding ERP charge as his car was detected passing through the ERP gantry at Havelock Road/Clemenceau Ave with a cash card that had an insufficient balance.

Apart from making a police report, Wan has also reached out to his neighbourhood residents committee and LTA who has classified his car as missing since Mar. 2.

Since it is still in SG and you have reported it, hope you can locate your vehicle soon.