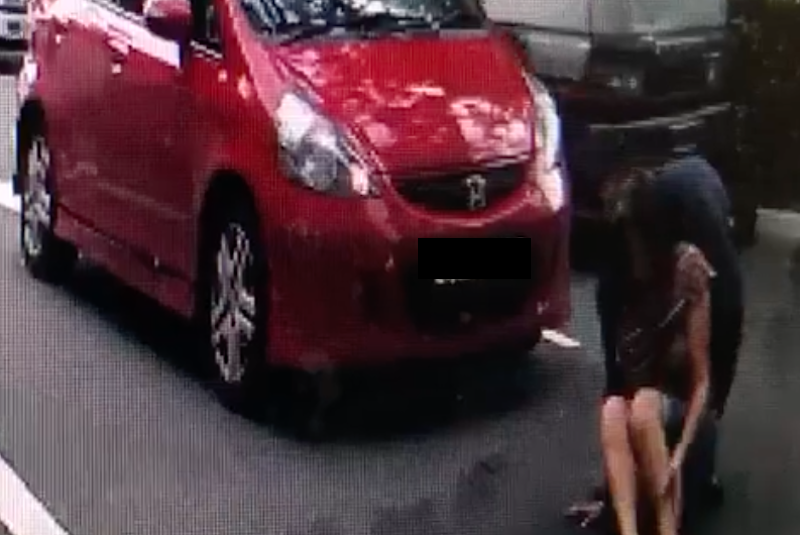 Driver knocks down woman along Ubi, but folks are focused on the inappropriate way he helped her up

A terrible accident that took place along Ubi Road 1 involved a motorist colliding right into a pedestrian who was crossing the road — the impact was hard enough to leave her lying across the car’s windshield for a few seconds before she fell on the road when the vehicle came to a stop. The driver then got out of his car and attempted to help her stand. Accident victims shouldn’t receive unnecessary movement from the scene (it’s best to wait for paramedics first), but the motorist probably acted the way he did out of panic.

Nonetheless, good on the driver for taking responsibility for his actions. He quickly helped the victim up and seated her in his car before driving off, presumably to the closest hospital — all in a span of about a minute since the accident occurred.

Naturally, a dash cam captured the entire incident, but, er, it’s going viral for all the wrong reasons. Netizens just can’t let go of the fact that the driver, unintentionally or otherwise, might have grabbed the victim a wee bit inappropriately in the process of transporting her to his car. Watch that video again, and pay attention to the placement of the dude’s hands and the victim’s reaction when he pulled her up from the ground.

It might have been a serious road accident, but folks are having a laugh about how the driver picked the lady up. Both figuratively, and literally.