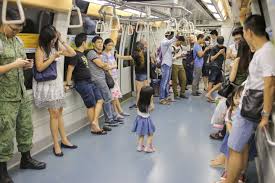 13 months’ jail for man who molested teen on MRT!

He had been standing behind a 13-year-old student on an MRT train towards Paya Lebar from Aljunied station around 6.30pm on 7 Jan 2016 when he used his little finger to poke her private parts.

Mak Yip Kee was jailed 13 months on Monday (5 Mar) for molesting the teenage on an MRT train.

A second charge of the 67-year-old outraging the modesty of a 23-year-old woman was taken into consideration.

The girl had been dressed in her school’s physical education attire when he boarded the train towards Pasir Ris, standing behind Mak. He was holding onto the safety bar with his right hand and had a mobile phone in his left.

His left little finger was pointing upwards, she noticed.

He poked her in the left thigh as the train left the station, and she looked down to see the pinky close to her left thigh.

She thought it was accidental, but he then poked her private parts over her shorts.

Shocked and frightened, she did not confront him and moved away. She noted that he kept trying to see where she was going.

As he was getting off the train at Paya Lebar station, he swung his right hand towards the 23-year-old woman, a business development executive, who was standing near the doors.

The girl realised he had also touched her. She approached the woman, and found out she was also molested by Mak.

The pair alighted at Bedok MRT station and sought help from the MRT staff, who notified the police.

Mak had a similar conviction from 20 years ago. He cannot be caned due to his age.