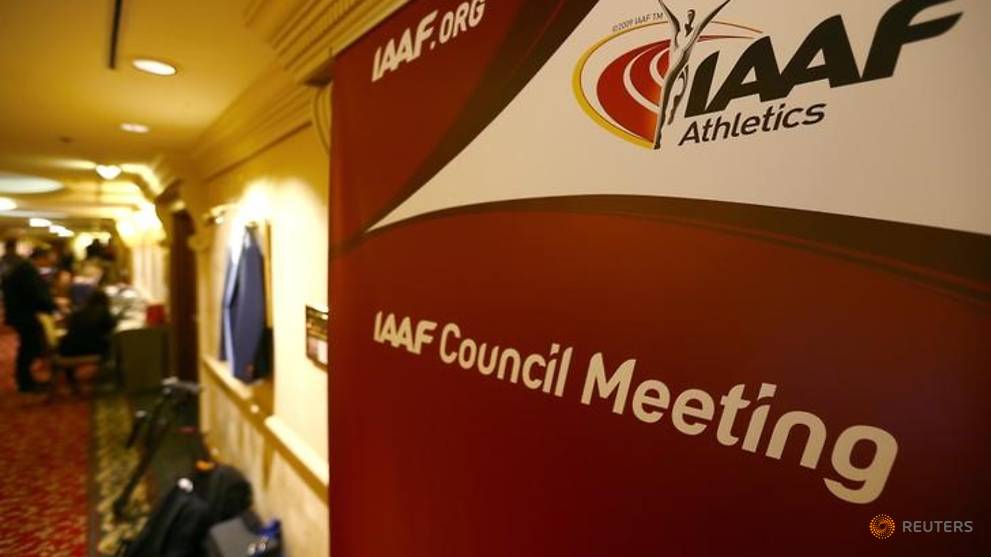 Russia's ban from international athletics over widespread doping was extended by the sport's governing body on Tuesday and the country was warned it could face further sanctions this year.

FILE PHOTO - Journalists are seen near a logo of the International Association of Athletics Federations (IAAF) at a hotel where the IAAF council holds a meeting in Vienna, Austria, June 17, 2016. REUTERS/Leonhard Foeger

REUTERS: Russia's ban from international athletics over widespread doping was extended by the sport's governing body on Tuesday and the country was warned it could face further sanctions this year.

The International Association of Athletics Federations said it would consider next July withdrawing permission for Russian athletes to compete as neutrals "if progress is not made."

It might even consider expelling Russia from the IAAF, it added after a Council meeting held in Birmingham, England.

Russia has been banned from the sport since November 2015 after the McLaren report discovered widespread doping.

Russia's political and sporting leaders have repeatedly denied state involvement in doping, a key sticking point in lifting the ban, although Russian athletes were allowed to compete as neutrals at last year’s world championships.

The IAAF said in a statement issued after its meeting on Tuesday that "while some conditions have been met....several key areas have still not been satisfied by RusAF (Russia's athletics federation) and RUSADA (Russia's anti-doping agency)".

This included a plan for this year "that shows an adequate amount of testing" and fixing legal issues which currently prevent athletics coaches from being provisionally banned.

Russia is still regarded as non-compliant by the World Anti-Doping Agency (WADA).

However, the country has been reinstated by the International Olympic Committee (IOC) after being banned from the Pyeongchang Winter Olympics last month where Russians could compete as neutrals.

Separately, the IAAF said it had agreed to a set of principles to allow athletes to transfer allegiance from one country to another. Transfers have been banned since the IAAF ordered an immediate freeze in February last year.

Unlike some other sports such as soccer, athletics allows its competitors to switch nationalities even after they have competed for one country. Several dozen athletes changed allegiance on the eve of the 2016 Olympics in Rio de Janeiro.

The new rules would include a minimum three-year wait, a review panel to “determine the credibility of applications” and evidence the new country was offering full citizenship rights.

Athletes would be allowed only one transfer in their careers and could not change nationalities before the age of 20.

The IAAF said the changes would be voted on at its Council meeting in Buenos Aires in July and the freeze on switching nationality would remain in place until then.