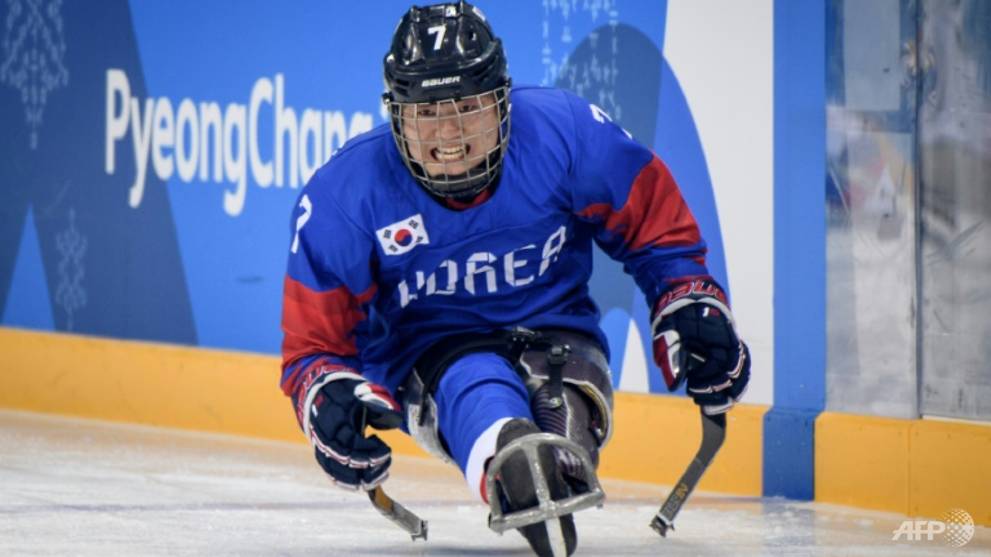 North Korean defector haunted by past at Paralympics

PYEONGCHANG: Choi Kwang-hyouk's Paralympics debut should have been a personal triumph, but the North Korean defector's past has returned to haunt him after Pyongyang sent athletes to the Games for the first time.

He fled the North in 2001 as a teenager and later settled in the South, leaving behind a miserable existence where he scraped a living by selling ice cream on trains.

Choi, who lost his left leg in an accident in the North, initially struggled to adapt to his new homeland.

But he later found success playing an adapted version of ice hockey in which disabled athletes compete on sledges, and will make his Winter Paralympics debut for the South in Pyeongchang.

Far from celebrating his achievements, however, Choi has been forced to confront his painful past due to the high-profile appearance of two North Korean cross-country skiers, part of an Olympics-driven inter-Korean rapprochement.

As Choi walked through the athletes' village, he had an uncomfortable encounter as he passed the two wheelchair-bound skiers from the North, accompanied by their delegation.

"I felt very self-conscious," said the 32-year-old. "I thought that they may look at me in a negative way.

"Honestly, I wanted to say hello to them but they seemed to be really stiff, so I couldn't bring myself to."

North Korea's debut at the Paralympics is part of a detente triggered by last month's Winter Olympics, where the two Koreas marched together at the opening ceremony and formed a joint team in women's ice hockey.

The Koreas will march separately at the Paralympics opening ceremony later Friday because of a dispute over whether to include islands claimed by Japan on the blue-and-white "unification flag".

But their participation is still regarded as another sign of the inter-Korean thaw that has now extended to plans for a historic meeting between US President Donald Trump and North Korea's Kim Jong Un.

However, for Choi, one of many who have defected to the South in recent years, the appearance of the North Koreans at the Games has brought his past life back into focus.

"I didn't have many good memories (in the North) so I do not want to think about it much," he admitted.

He had a troubled upbringing in the North. His parents separated when he was a child, leaving him homeless, and he started selling ice creams on trains to survive.

One day he had an accident while selling ice cream, which led to him losing his left leg.

Life was not easy for Choi after that. He had to use wooden crutches as there were no prosthetic limbs available for him in the North, and he faced much discrimination.

North Korea has often been criticised for its cruel treatment of disabled people, with a 2006 United Nations report alleging that people with disabilities were sometimes forced to leave the showcase capital Pyongyang and live in camps.

"Life is really difficult for people with disabilities in North Korea, and the way people look at the disabled is also not very pleasant," Choi said.

"When some high-ranking officials visit, people with disabilities are often discouraged from going outside."

Still, North Korea has won some praise in recent years for improving its treatment of disabled people.

Pyongyang has signed a key United Nations convention on disabled people, and last year allowed a visit by the UN Special Rapporteur on the rights of persons with disabilities.

The participation of athletes from the North at the Winter Games has also been hailed as a positive step.

But Robert King, a former US special envoy for North Korean human rights, wrote in a post on the website of the Korea Economic Institute of America, that their participation was "motivated much more by the political effort to improve Pyongyang's political relationship with South Korea".

Despite the unwelcome appearance of his former compatriots at the Games, Choi is trying not to dwell on the past.

"The way I feel right now is what matters, not the past," he said. "What is important to me is the present."