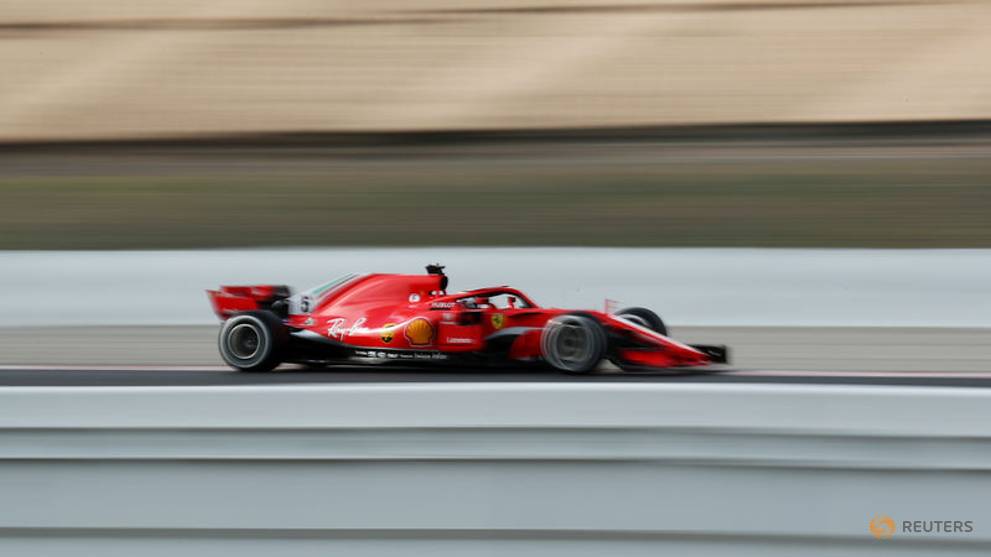 Ferrari's Sebastian Vettel wrapped up the penultimate day of Formula One's pre-season testing in impressive style by setting an unofficial track record at the Circuit de Catalunya on Thursday.

BARCELONA: Ferrari's Sebastian Vettel wrapped up the penultimate day of Formula One's pre-season testing in impressive style by setting an unofficial track record at the Circuit de Catalunya on Thursday.

The four-times world champion lapped with a best time of one minute 17.182 seconds, on the new hypersoft tyres, and more than a second quicker than anyone else in a dry session with few problems.

The time eclipsed the previous best, since the Barcelona circuit was reconfigured in 2007, of 1:18.047 set on Wednesday by Red Bull's Australian Daniel Ricciardo. Times in testing are not recognised as records.

Neither rivals Red Bull nor champions Mercedes were focussing on lap times, concentrating instead on race simulations, and Mercedes have felt no need to try out the hypersoft Pirelli tyres.

General expectations are for a tighter battle at the front this season, with Mercedes seen as being still ahead but not by much.

All the teams did more than 100 laps, with Vettel also completing a race simulation and doing 188 - the most of any driver and one more than Red Bull's Dutch youngster Max Verstappen.

The German, runner-up last season to Britain's Lewis Hamilton, is scheduled to hand over to team mate Kimi Raikkonen for the final day of testing before the teams head to Australia for the opening race on March 25.

Danish driver Kevin Magnussen was second fastest on supersoft tyres with a time of 1:18.360 while France's Pierre Gasly was third on the timesheets in the Honda-powered Toro Rosso and completed an impressive 169 laps.

McLaren put two days of troubled running behind them with a solid 151 laps for Belgian Stoffel Vandoorne, who was sixth on the timesheets.

Hamilton and team mate Valtteri Bottas shared the Mercedes, with the reigning champion completing 84 laps and the Finn adding 97 to the tally.