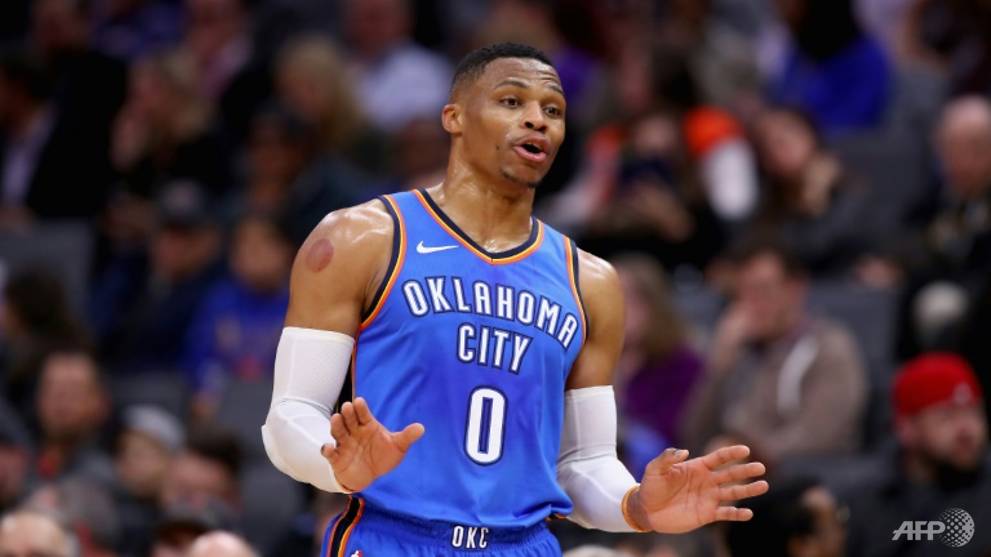 Westbrook scored 21 points and added 12 rebounds and 10 assists as the Thunder improved to 6-3 since the All-Star break.

The Thunder held Spurs star LaMarcus Aldridge to 11 points on 5-of-16 shooting as San Antonio lost for the eighth time in 10 games.

The Spurs, who have slipped to seventh in the Western Conference, are now assured of having a losing road record for the first time in 21 seasons.

Their chances of extending their NBA record streak of 20 straight playoff appearances also appear to be dwindling, although the San Antonio could be bolstered next week by the return of Kawhi Leonard from a 20-game injury absence.

The Thunder jumped to fifth in the West, but will be concerned after Steven Adams sprained his left ankle when he came down hard early in the third quarter.

The Miami Heat moved within half a game of the sixth-placed Philadelphia 76ers in the Eastern Conference with a convincing 129-102 victory over the Washington Wizards.

Up 60-48 at halftime, the Heat out-scored the weary Wizards 43-28 in the third quarter and cruised home despite the absence of center Hassan Whiteside, who was a late scratch with a sore left hip.

"We were doing shootaround and I felt something," Whiteside said. "I strained my hip flexor."

The Heat also saw veteran Dwyane Wade depart in the fourth quarter with a strained hamstring, but that proved no obstacle as the team avenged an overtime loss to the Wizards in Washington on Tuesday.

"Our energy was great, both ends of the court," Heat coach Erik Spoelstra said. "Right from the beginning, it looked like we were the more aggressive, faster, quicker team.

"And they're coming off a back to back and they had to travel from New Orleans. That was part of what we wanted to do. But again, our depth and multiple guys being able to contribute, that's the strength of our team."