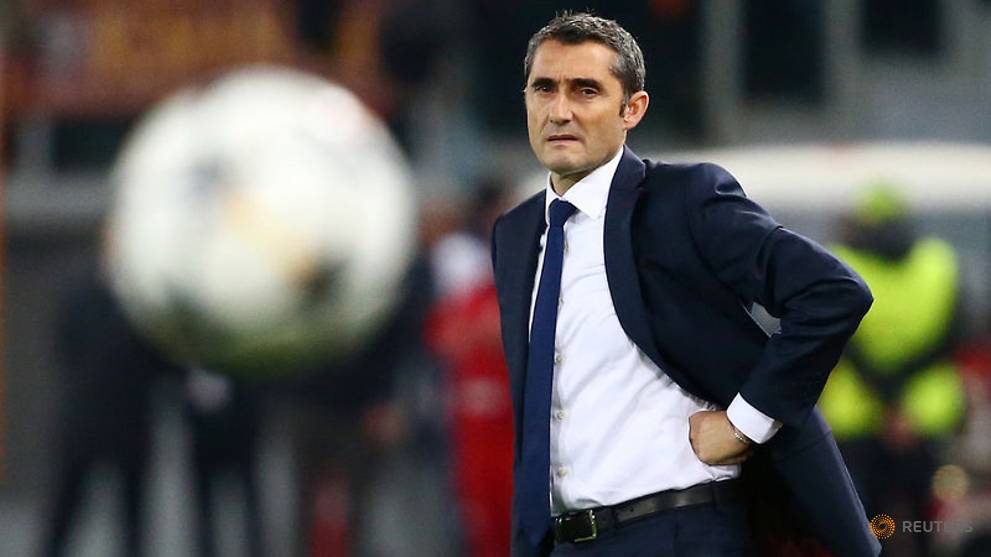 Barca taking no chances with Sevilla after Roma nightmare - Valverde

Barcelona coach Ernesto Valverde said his side have learned from their shock Champions League exit not to take anything for granted as they prepare to face Sevilla in the King's Cup final on Saturday.

BARCELONA: Barcelona coach Ernesto Valverde said his side have learned from their shock Champions League exit not to take anything for granted as they prepare to face Sevilla in the King's Cup final on Saturday.

Valverde has the chance to win his first trophy as Barca coach and is one victory away from wrapping up the Liga title but his excellent debut campaign has been overshadowed by the 3-0 defeat by AS Roma which knocked his side out of Europe on away goals after leading 4-1 in the quarter-final first leg.

Barca have 35 points more than eighth-placed Sevilla and are favourites to win the final at the Wanda Metropolitano, which would see them lift the Cup for a record-continuing 30th time as well as becoming the first team since 1933 to win it in four consecutive seasons.

"We have been in a situation before where everyone said we were the favourites but we got lost on the way," Valverde told a news conference on Friday.

"When you have an important defeat you always want to follow it with an important win. We have the chance to compensate for that little set back we had."

Sevilla came closer than any other team to ending Barca's unbeaten run in La Liga when the sides met at the Sanchez Pizjuan last month, with the Andalusians leading 2-0 with three minutes to go until Luis Suarez and Lionel Messi scored in the space of a minute to snatch a 2-2 draw.

"That game is a clear reference point for us and a warning of what could happen tomorrow," Valverde added.

"They have a very good team and can cause you real damage in an instant. They have suffered in the league from their exploits in the Champions League and Cup but when we played against them we suffered a lot, they were the team that has come closest to beating us."

Valverde lost the 2015 Cup final to Barcelona when in charge of Athletic Bilbao and was beaten in the 2007 UEFA Cup final by Sevilla in a penalty shootout when he was manager of Espanyol.

The coach has a full-strength side to choose from after Ivan Rakitic recovered from surgery on his finger although he said he will keep faith with Dutch goalkeeper Jasper Cillessen, who has played in all Barca's Cup games but not featured once in the league this season.

Sevilla were denied victory over Barca in the league by an 89th-minute strike from Messi and the club's coach Vincenzo Montella said his side will focus on trying to deprive the Argentine talisman of the ball.

"Messi is an extraterrestrial but I hope tomorrow he doesn't land on earth," the Italian coach said.

"When the ball is at his feet it's very difficult to stop him so it's important that we don't allow him to get near the ball."