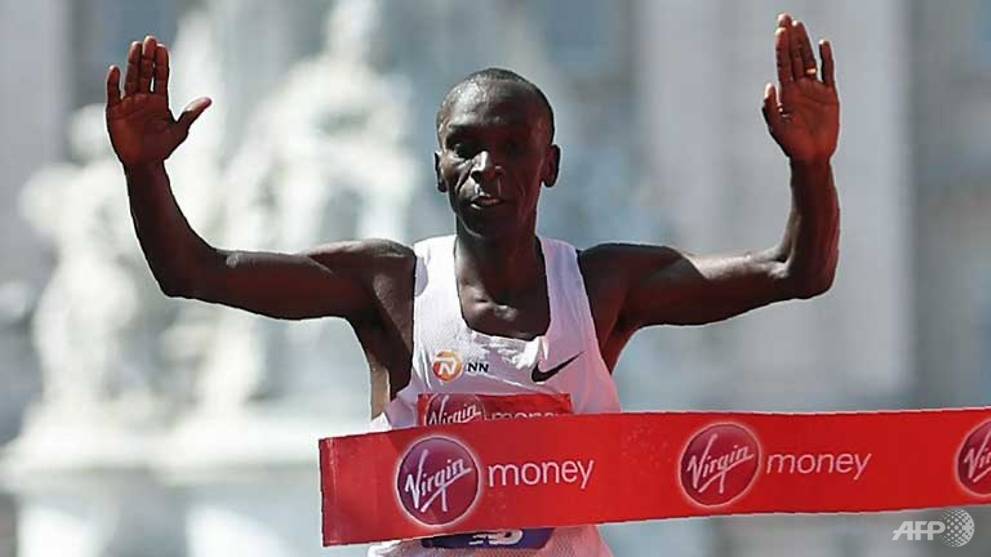 Kipchoge, 33, saw off the challenge of Ethiopia's Tola Shura Kitata and home favourite Mo Farah to win his third race in the British capital in four years in a time of 2hrs 04min 17sec, finishing more than half a minute in front of Kitata (2:04:49), with Farah third (2:06:21).

The race was the warmest London Marathon on record, with a high of 23.2 degrees Celsius (73.8 degrees Fahrenheit), beating the previous mark of 22.7 degrees Celsius set in 1996.

The Kenyan led the way with Ethiopian great Kenenisa Bekele and last year's winner Daniel Wanjiru of Kenya also in the mix.

Farah was at the back of the lead group despite twice making a mess of picking up his water bottle at the designated drink stations.

The British track great, who won gold in the 5,000 metres and 10,000m at the past two Olympic Games, admitted his second full marathon had taken its toll in a race where there was a world record pace at the halfway point.

"I am knackered," said the 35-year-old, who broke the British marathon record.

"The guys went for it, they were on for world record pace, so it was do or die. I went with it and hung in as much as I could.

"It's so different to the track. It's incredible. It's different pain, different training but I've really enjoyed it. I gave it all, 110 per cent as I normally do."

In unusually warm conditions, first Dibaba and then Keitany dropped off the pace, allowing the 2016 Olympic 5,000m gold medallist to claim victory.

After nine miles Keitany and main rival Dibaba were 25 seconds ahead of Radcliffe's time. But Dibaba was soon reduced to a walking pace to leave Keitany with only her two male pacemakers for company.

Keitany, looking for a fourth win in London, also started to slow down as it became apparent Radcliffe's record of two hours 15 minutes 25 seconds would not be threatened.

"The reason it was so good for me today was because I started slowly. I didn't go with the faster group because the faster group was quicker than I was at the start," Cheruiyot told the BBC.

"I didn't want to race against anybody, I wanted to race alone. So I raced like that."