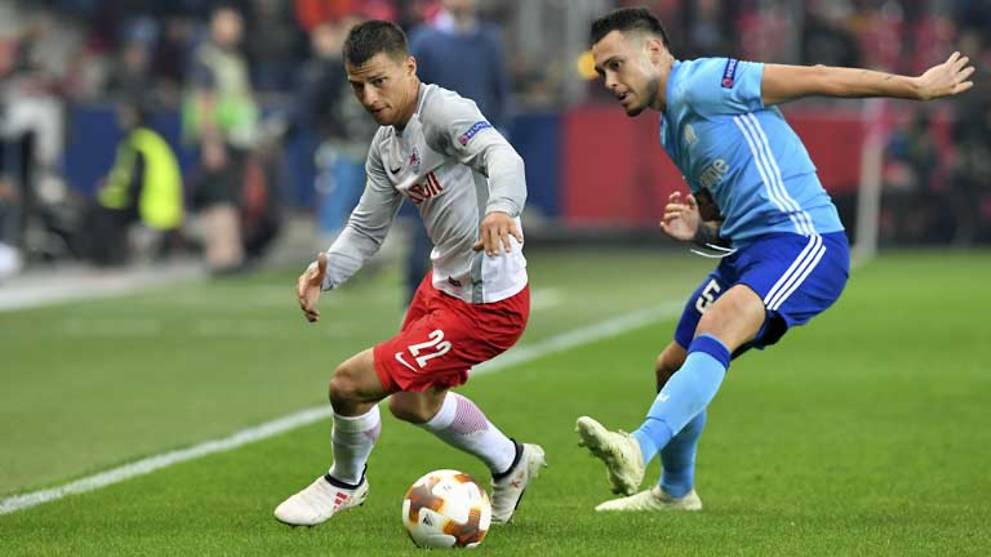 SALZBURG, Austria: Marseille booked a Europa League final meeting with Atletico Madrid after Portuguese defender Rolando struck in extra time to grab a 3-2 aggregate victory over a spirited Salzburg on Thursday (May 3).

Salzburg produced a rousing second-half performance to wipe out a 2-0 first-leg deficit, but Marseille became the first French side to reach a European final since 2004 despite a 2-1 defeat on the night.

Amadou Haidara gave the dominant hosts hope early in the second half with an excellent individual effort before Bouna Sarr's own goal levelled the semi-final.

Rudi Garcia's visitors survived some late scares to force a further half-hour and substitute Rolando volleyed home a 116th-minute Dimitri Payet corner that shouldn't have been given.

The 20-year-old Haidara, the outstanding player on the night, was sent off as his frustrations boiled over, as Salzburg's incredible run which included wins over Borussia Dortmund and Lazio came to an end.

Marseille, runners-up to Valencia in the UEFA Cup 14 years ago, will make the short trip from their Stade Velodrome home to take on Atletico in the final in Lyon on May 16, after the Spaniards beat Arsenal in the other semi-final.

"We believed in it and in the end we managed to get everyone together, all the people of Marseille believed in us, we're in the final," defender Adil Rami, who won the tournament with Sevilla two years ago, told BeIN Sports.

"It's going to be a big game, we will have given a wonderful experience to all the people of Marseille and now we have to win this final."

Payet, who set up both of Marseille's first-leg goals, immediately provided a set-piece threat as his wicked delivery from a free-kick was turned over by Lucas Ocampos in the sixth minute.

Salzburg, knowing a Marseille away goal would all but end the tie, were cautious in the first half and failed to cause the visitors any real anxious moments, with their best effort a tame shot from Munas Dabbur straight at goalkeeper Yohann Pele - playing with Steve Mandanda still out injured.

Marseille started strongly after the interval, with Ocampos and Valere Germain both going close, but Salzburg blew the tie wide open by breaking the deadlock in the 53rd minute.

Malian international Haidara burst forward and fired a low strike under the body of Pele to halve the deficit with his eighth goal of the season.

That goal gave the Austrians renewed hope and Pele had to be alert to beat away a venomous long-range strike from Brazilian centre-back Andre Ramalho.

The equaliser was coming and it duly arrived in the 65th minute with Haidara again playing his part as Marseille's defence capitulated.

The midfielder's low cross was miskicked by centre-back Adil Rami straight to Xaver Schlager, whose sliced volley was turned into his own net by Sarr.

Salzburg, who also beat Marseille 1-0 at home in the group stage, had chances to move in front, as Croatian defender Duje Caleta-Car headed over and Pele sprung to his right to tip away a low drive from substitute Hwang Hee-chan.

Marseille came agonisingly close to booking a place in the final in normal time, but Florian Thauvin's header came back off the crossbar.

Both sides were nervy at the start of the extra 30 minutes, but Marseille were left indebted to their stand-in goalkeeper as Pele produced a magnificent one-handed save to keep out Caleta-Car's powerful header.

Rolando was sent on by Garcia to try and secure a penalty shoot-out, only to snatch a controversial winner.

A corner was awarded despite Andre-Frank Zambo Anguissa's shot appearing to strike a Marseille foot before flying behind, and the 32-year-old Rolando side-footed another dangerous Payet cross into the net.