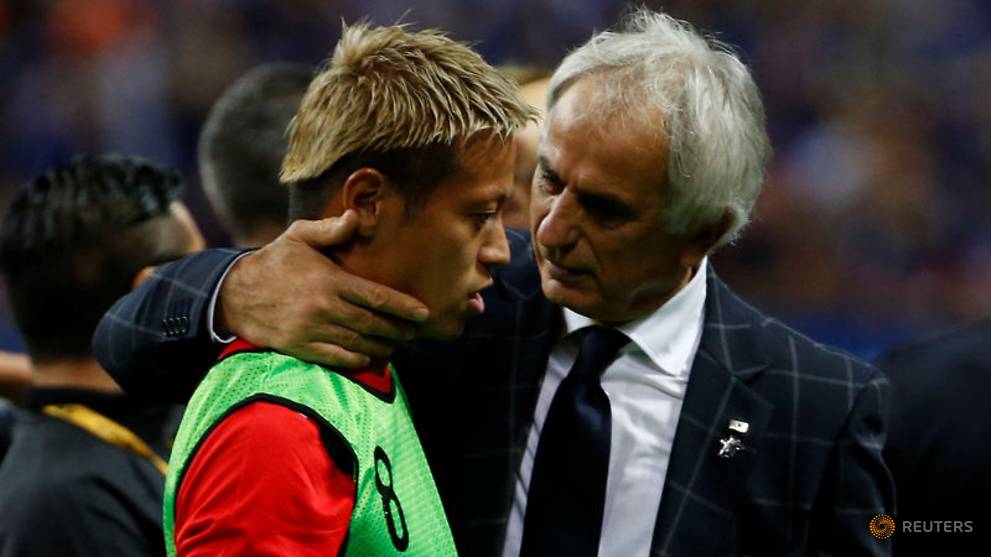 TOKYO: Japan forward Keisuke Honda has slammed former national team boss Vahid Halilhodzic's methods as the fallout from his abrupt dismissal as coach continued in the run-up to the World Cup.

The talismanic 31-year-old, who had become a peripheral figure under Halilhodzic, told Japanese broadcaster NHK that he was frustrated at the rigid tactics being deployed by the firebrand Franco-Bosnian.

"I don't have any regrets (about the change of leadership)," Honda said in a documentary that aired late on Monday (May 14).

"To submit myself to the kind of football Halilhodzic played in order to get picked, that would be shameful for me," sniffed the former AC Milan player.

"I'm proud that I've stayed true to myself."

Honda, currently playing for Mexico's Pachuca, shot to fame at the 2010 World Cup in South Africa when his goals helped Japan reach the last 16.

But his relationship with Halilhodzic, who took the Japan job in 2015 before being dumped in April, had become increasingly fractious over the past year.

Honda, instantly recognisable with his spiky, bleach-blond hair, sat glumly on the bench when Japan secured their spot at this year's World Cup in Russia by beating Australia 2-0 at home last August.

The Japan Football Association blamed Halilhodzic's sacking on a breakdown of communication with players, a charge that has prompted the former Algeria coach to consider legal action.

Halilhodzic claimed there were only two players he did not see eye to eye with, thought by many to be Honda and Borussia Dortmund playmaker Shinji Kagawa - Japan's two best-known players.

Honda, meanwhile, doubled down on bold statements he made in years past about Japan winning the World Cup, despite failing to progress beyond the last 16 in five previous attempts.

"I know I promised the Japanese people we would win the World Cup," he said.

"I have not forgotten that. Frankly that's why I want to go to the World Cup and show how much it means to me to fight for the title.

"What I can't accept is that there is a situation in which I might be dropped - not with the World Cup so close."

New Japan coach Akira Nishino is expected to name his 23-man World Cup squad on May 31.