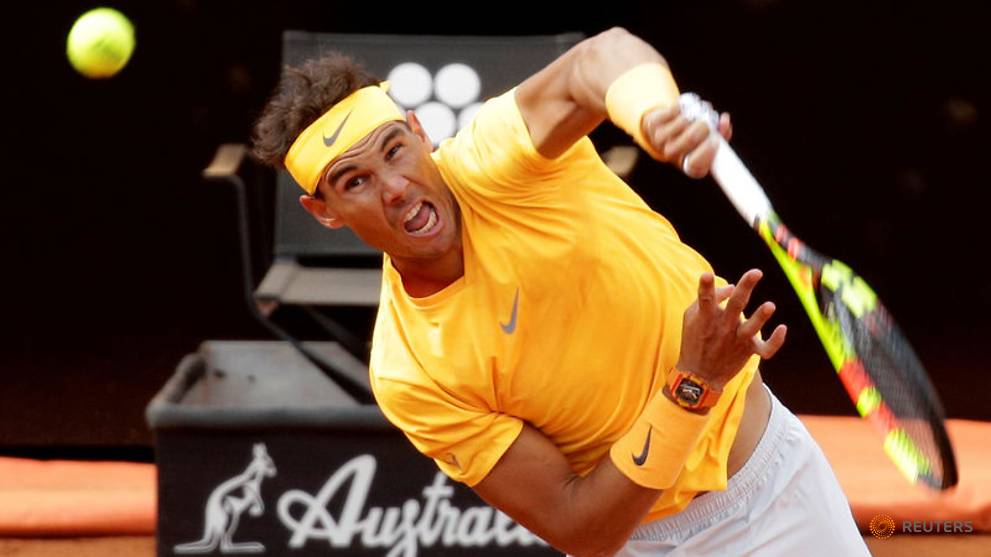 Rafa Nadal swept into the quarter-finals of the Italian Open on Thursday with a ruthless 6-4 6-1 victory over Canadian teenager Denis Shapovalov.

REUTERS: Rafa Nadal swept into the quarter-finals of the Italian Open on Thursday with a ruthless 6-4 6-1 victory over Canadian teenager Denis Shapovalov.

The top seed, who will reclaim the world number one ranking from Roger Federer if he wins his eighth title in Rome, turned in a near-flawless performance, losing only five service points as he honed in on victory in an hour and 22 minutes.

"It was a solid match for me," Nadal said. "I started with some mistakes on the return but with my serve, I didn't lose many points."

The Spaniard will resume his quest for his first title in Rome in five years against Italian Fabio Fognini.

Fognini battled hard to reach the quarters, coming from 2-4 down in the opening set to beat German Peter Gojowczyk 6-4 6-4.

Former world number one Novak Djokovic is also in the quarter-finals for the first time this year.

Djokovic, back after a troublesome elbow injury, showed flashes of his formidable best as he beat Spain's Albert Ramos-Vinolas 6-1 7-5 and will meet Japan's Kei Nishikori in the next round.

Nishikori, who like Djokovic is trying to come back from injury, was in complete control against Philipp Kohlschreiber, defeating the German 6-1 6-2.

Belgian Goffin was leading 6-2 4-5 against fifth seed Juan Martin del Potro when the Argentine was forced to retire with what appeared to be a groin injury that throws his participation at the French Open into doubt. The Paris major begins on May 27.

"I was worried so I decided to stop the game at the end of the second set to see the doctor and see what they say," Del Potro said. "I will do all of the exams now and then I will try to make a good decision for the future."

The Croatian dropped his serve early in the second set, but stayed calm, controlling play from the baseline and picking his moments to turn up the heat.

Cilic will face Pablo Carreno Busta for a place in the semi-finals.

(Reporting by Simon Jennings in Bengaluru, editing by Pritha Sarkar)