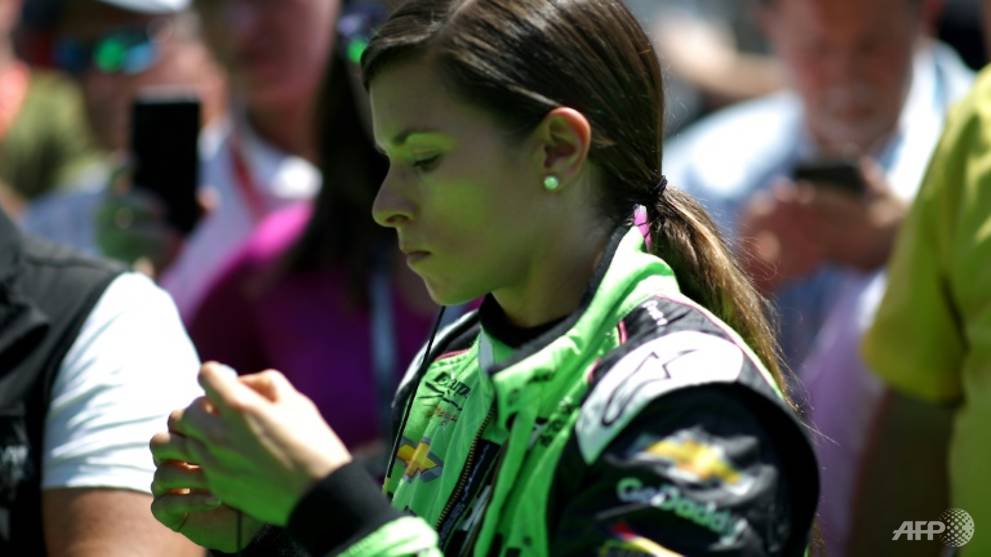 Danica Patrick, the only woman to win an IndyCar race and start from pole at the Daytona 500 NASCAR stock car race, lost control and hit the wall on the 68th lap of the Indy 500. (Photo: AFP/Chris Graythen)

CHICAGO: Danica Patrick's 20-year auto racing career came to an abrupt end on Sunday (May 27)when she crashed out of the 102nd Indianapolis 500.

Patrick, the only woman to win an IndyCar race and start from pole at the Daytona 500 NASCAR stock car race, escaped injury after losing control and hitting the wall on the 68th of 200 laps on the famed 2.5-mile Indianapolis Motor Speedway oval, where Will Power became the first Australian to win "The Greatest Spectacle in Racing".

"Today was really disappointing, for what we were hoping for and what you want for your last race," said the 36-year-old American, who slid back across the track and came to rest in the infield.

She climbed out of the neon-green car and was examined and released from the on-site medical facility.

"But I'm grateful for all of it. I wish I could have finished stronger."

Patrick had said she would be turning her attention to her varied business interests after completing what she dubbed the "Danica Double" of the Daytona 500 and the Indianapolis 500.

She finished 35th at Daytona after being involved in a six-car crash.

Patrick, returning to Indianapolis for the first time since 2011, qualified seventh-fastest in a car owned by Ed Carpenter, the hometown hero who qualified for his third Indy 500 pole and happily backed Patrick's bid for one last ride.

Patrick acknowledged it wasn't an emotional day - as she said goodbye not only to the Brickyard but to her whole career.

"It's an entire career. But what really launched it was this, so it's both of them," she said.

"I'm pretty sad," she added. "I will say, though, for sure I'm very grateful for everybody and for being able to finish it up (at Indianapolis) like I wanted to."

Patrick was at a loss to explain the cause of her crash.

"The first thing I said was 'I'm not really sure what happened,'" she said. "It just seemed to come around, it seemed pretty late off the corner, so I don't know."

Patrick had been pointed at a professional racing career since becoming a national champion go-kart racer. Her parents approved her dropping out of high school in 1998 and moving to England, where she competed for three years before returning to America and driving in development circuits for three years until landing an IndyCar ride in 2005.

She made a major splash in her Indianapolis debut, setting the fastest overall practice speed and starting fourth in the oval classic.

Patrick led 19 laps but had to conserve fuel late and settled for fourth, matching her best finish of the season on the way to Indy 500 and IndyCar Rookie of the Year honors.

Patrick became the first woman to win a top-level open wheel race in 2008 when she captured the IndyCar race at Motegi in Japan. The next year she was third at Indy. But after the 2011 season, Patrick switched to US stock car racing and competed there full time through the end of 2017.

While detractors complained that the plain-speaking Patrick's savvy self-promotion brought her fame out of proportion to her on-course results, plenty of fans considered a role model for women.

No less than seven-time NASCAR champion Jimmie Johnson tweeted earlier this year: "Thank you @danicapatrick for being a strong role model to the little girls in my life," referring to his two young daughters.

As she turns her attention to interests such as her clothing line and wine vineyards, Patrick says she'll stress women's empowerment as she continues to build her own brand.

"I'm not shy about my message," Patrick said this month. "The next phase of moving into life after racing is I want to spread that message of empowerment and dreaming, setting big goals for yourself and finding what it is that you love to do so you have the motivation to do it past when it's challenging."