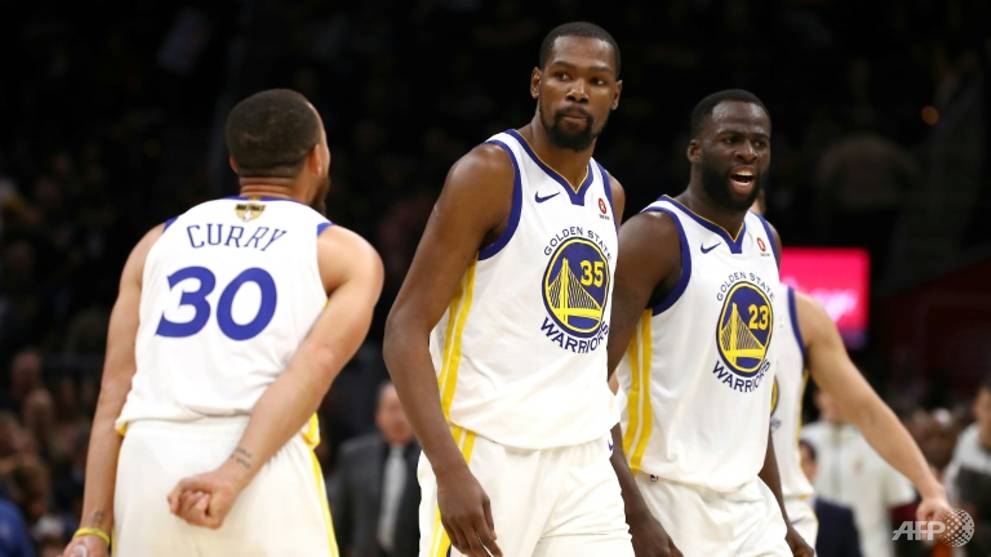 Stephen Curry (L), Draymond Green (R) and Kevin Durant of the Golden State Warriors celebrate after scoring against the Cleveland Cavaliers in the second half during Game Three of the 2018 NBA Finals, in Cleveland, Ohio, on June 6 AFP/Gregory Shamus

CLEVELAND: Defending champion Golden State, powered by 43 points from Kevin Durant, moved to the brink of a third NBA title in four seasons by defeating the Cleveland Cavaliers 110-102 in game three.

The Warriors seized a commanding 3-0 lead in the best-of-seven NBA Finals and by winning game four on Friday (Jun 8) can complete the first championship series sweep since Cleveland was blanked by San Antonio in 2007.

No team has ever recovered from a 3-0 deficit to win a playoff series, but the Cavaliers made the best comeback in NBA Finals history in 2016 from 3-1 down to swipe a title from Golden State.

Durant added 12 rebounds and seven assists to his career-high playoff scoring total, but it was not until his 3-pointer with 49 seconds remaining to give the Warriors a 106-100 lead that Cleveland's fate was sealed.

"That was amazing what he did out there," Warriors coach Steve Kerr said. "Some of those shots, I don't think anybody in the world but him could have made those shots."

Durant's last basket was eerily like a 3-pointer he made late in game three last year against the Cavs that clinched a Golden State victory.

It was another dagger in the title hopes of Cleveland star LeBron James, who had 33 points, 10 rebounds and 11 assists while Kevin Love added 20 points and 13 rebounds for the Cavaliers.

The Cavaliers had been 8-1 at home in the playoffs with eight wins in a row since losing their first-round opener to Indiana.

But the Warriors improved to 10-2 against the Cavaliers since Durant joined Golden State before last season.

James landed badly going for a rebound early in the second quarter and limped on his right ankle, but the four-time NBA Most Valuable Player kept playing and helped keep the Cavaliers in contention in the second half.

LeBron James (R) of the Cleveland Cavaliers defends a shot by Jordan Bell of the Golden State Warriors in the second half during Game Three of the 2018 NBA Finals, at Quicken Loans Arena in Cleveland, Ohio, on June 6 AFP/Gregory Shamus

Warriors forward Andre Iguodala, the 2015 NBA Finals Most Valuable Player, returned to Golden State's lineup after being sidelined by a left leg bone bruise. He suffered a bruised right leg in the second quarter but returned in the fourth quarter.

Durant scored nine points in a 15-8 run to close the second quarter that pulled Golden State within 58-52 at half-time after trailing by as many as 13 points.

JaVale McGee scored six points and Durant added five in a 15-3 Golden State run early in the third quarter that produced the Warriors' first lead and saw it grow to a team-best 69-64.

The Cavaliers, sparked by reserve Rodney Hood, closed to 83-81 entering the fourth quarter and battled the Warriors into the final seconds.

Stephen Curry, who missed 13 of his first 14 shots, conncted on a layup and 3-pointer back-to-back to give Golden State the lead for good.

Curry had 11 points while McGee, Draymond Green, Klay Thompson and Jordan Ball all had 10 for the Warriors.

Cavaliers owner Dan Gilbert tweeted an image of the half-time box score noting the fact the Cavs didn't attempt a free throw in the first half, deleting it shortly after.

Durant had 24 points and eight rebounds in the first half while the Warriors' other four starters made a combined 5-of-20 from the floor for only 13 first-half points and Cleveland enjoyed a 28-16 first-half rebounding edge.

Cleveland opened the game with a 16-4 run but the Warriors closed the first quarter with a 16-7 spurt to pull within 29-28 entering the second quarter.

Durant had 11 points in the run and grabbed all seven Golden State rebounds in the opening quarter.

The Cavs began the second quarter with an 21-9 run, James scoring eight points and Love netting the final eight for Cleveland to produce their biggest lead at 50-37.