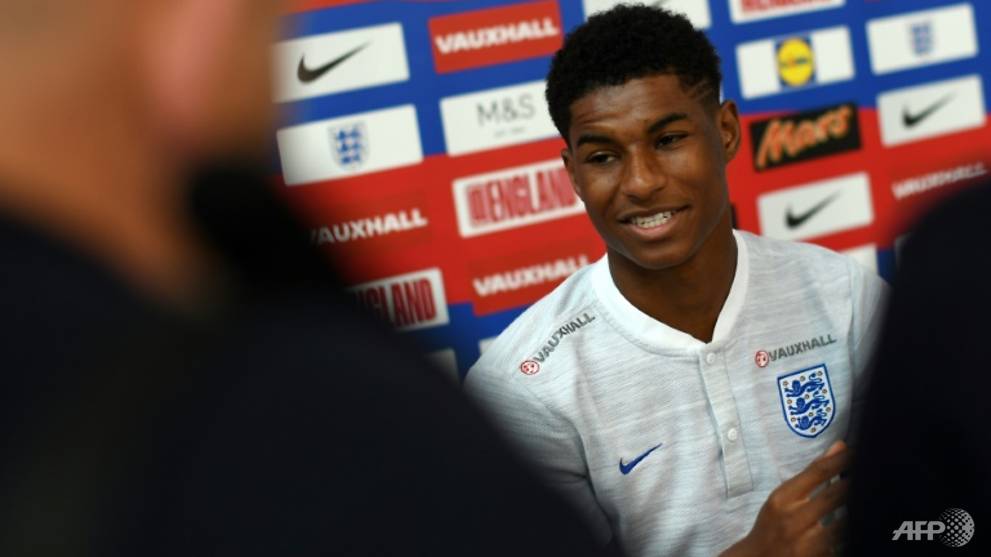 LEEDS: Marcus Rashford staked his claim to start England's World Cup campaign with a stunning strike in a 2-0 victory over Costa Rica in a friendly in Leeds on Thursday (Jun 7).

Danny Welbeck also justified his inclusion in Gareth Southgate's squad by coming off the bench to seal the win.

In England's last match before their tournament opener against Tunisia in 11 days time, Manchester United's Rashford was the star of a much-changed side.

Rashford's dipping drive on 13 minutes was the highlight of an all-round satisfactory evening for Southgate as the hosts extended their unbeaten run to 10 games, stretching back nearly a year.

"You work on them (goals) in training every day and when one comes up in a game it's a reward," Rashford told ITV.

And Rashford joined the likes of Harry Kane, Raheem Sterling and Dele Alli in recent days by insisting England shouldn't settle for just reaching the latter stages after early exits in recent tournaments.

"Going to the World Cup and playing a major part in my main aim," he added.

"We have got a good chance. Anything is possible and we have to go there with the highest expectations."

Southgate made 10 changes from the side that beat Nigeria 2-1 on Saturday with 19-year-old Trent Alexander-Arnold of Liverpool handed his international debut at right-back.

However, it was another youngster in Rashford, 20, who caught the eye from the off.

A sublime piece of skill down the left forced an early corner from which his United team-mate Phil Jones saw a looping header turned onto the bar by Keylor Navas.

Real Madrid goalkeeper Navas was completely caught out moments later, though, as Rashford unleashed a powerful drive from 25 yards that dipped perfectly over him and into the top corner for his third international goal.

Navas was Costa Rica's hero of an incredible run to the World Cup quarter-finals four years ago in Brazil, helping to knock England out of the group stages on the way.

However, there was a gulf in class even between Southgate's largely second string line-up and the Central Americans as England dominated.

Navas kept his side in the game by denying Jamie Vardy from point-blank range as he latched onto Leicester team-mate Harry Maguire's knockdown.

At the other end Jack Butland was handed a final chance to impress and try and oust Jordan Pickford as Southgate's first-choice goalkeeper.

The Stoke keeper wasn't called into action until 27 minutes when he made a smart save high to his left to turn Johan Venegas's effort behind.

Costa Rica face tournament favourites Brazil as well as Serbia and Switzerland in Group E, and will need to show far more ambition once they get to Russia if they are to replicate their heroics of four years ago.

Southgate held off making any changes until the hour mark and left Harry Kane in reserve for the full 90 minutes as his side continued to control the game after the break.

Jordan Henderson, captaining the side in Kane's absence, saw a powerful effort turned behind by Navas.

From the resulting corner, Bryan Oviedo cleared Maguire's goalbound header off the line.

England's rhythm was then stunted by five quickfire substitutions, including a debut for Burnley's Nick Pope in goal.

But two of those to come off the bench combined for England's second goal 14 minutes from time as Dele Alli's cross was headed home by Welbeck.